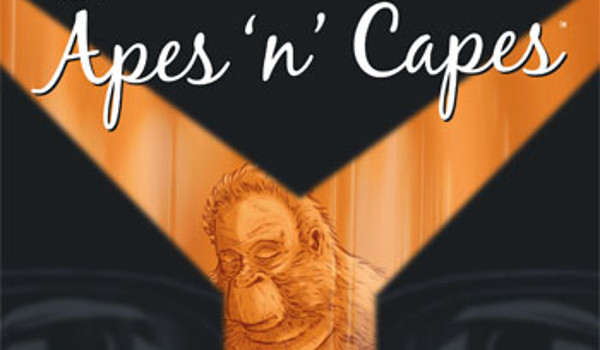 If you’ve read my reviews of the previous issues of Apes ‘n’ Capes (which are here and here, so no excuse), then you’ll know that I’ve been eagerly anticipating Issue 4 for over a year. As has been true for the whole of the series, this issue helps make more sense of just what was going on in the previous issues, and if you are new to the series I highly recommend reading them in bulk.

I have made no secret of how much I enjoy the artwork of Matt Rooke – if you need proof, just flip to next month’s image in the Year of the Mockbuster calendar (or sign up for the digital version). Apes ‘n’ Capes 4 is no exception, with some incredibly detailed scenes, with everything from starry nights to our familiar furry heroes. The fact that I can usually tell which monkey is which is a perfect example of the detail he goes into (although I do sometimes get the bears confused).

Unlike the previous issues, Issue 4 is more focused on character development that plot advancement, delving into the early life of Lilian Craig, Handel, and Benjamin Tremayne. We return to the action where Wallace and the monkeys are still being chased by the bears while Simone and the Flame embark on a different kind of journey. From there things take a bit of an interesting turn, which you’ll just have to see for yourself. As usual, Grainne McEntee‘s writing is subtle, yet still manages to be revealing just when we need it. 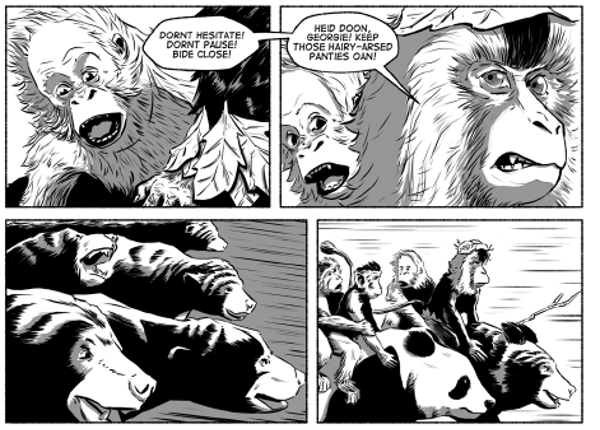 While I enjoyed each segment, I did find the transitions between them a bit jarring. The time and location shifts were a bit abrupt at points, although the ending is a clue as to why that might be. Speaking of, to say that the ending of this issue caught me completely off-guard is a bit of an understatement. Not only do we not get the same kinds of answers we got in the last issue, but even more questions are raised, and it seems like the series will be taking a dramatically different path moving forward.

Like the previous issue, this one finishes with a “Twist in the Tails” short story, with art by Lee Killeen instead of Rooke. Killeen, who was also the Layout Assistant on the rest of the issue, provides an interesting look at a day at the zoo for a young Lilian. Let’s just say that there’s an interesting twist in perspective that made me laugh and leave it at that. McEntee’s dialogue in this section is also quite clever, and features more of the trademark Scottish brogue that I’m finally starting to understand.

Apes ‘n’ Capes 4 provides another great addition to an already very enjoyable series, and once more I’m left chomping at the bit for the next issue!

Apes ‘n’ Capes Issue 4 will be released this weekend at London Super Comic Con. For more information on the series or to pre-order Issue 4, head to ApesNCapes.com! You can also follow the apes on Twitter @ApesNCapes.