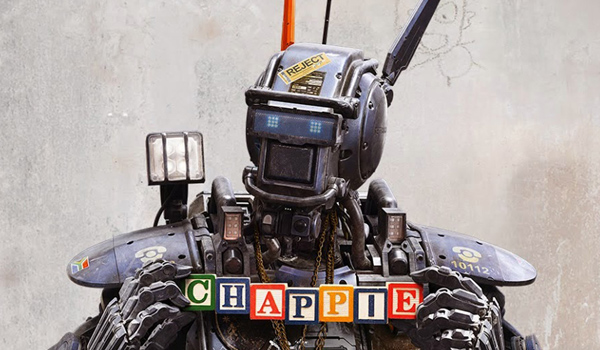 Number Five is alive!  Well, Number 22 in the case of Neill Blomkamp‘s third feature-length outing, Chappie, a story about a decommissioned police robot given artificial intelligence. While having somewhat less sociopolitical commentary as District 9, Chappie still exposes the reality of South African violent crime via science-fiction blockbuster. Trying to instill the messages of the purity of innocence, unconditional love, and humanity while simultaneously condemning AND accidentally glorifying violent gang-related crime causes a mood-swinging hodgepodge of a narrative, but depending on which facet you choose to focus on, you may find Chappie a heartfelt (but unnecessarily violent) story with an optimistic outlook for humankind, or an explosive Transformers-quality, robot-on-robot, violent good time (with a little too much sappiness). As a fan of previous innocent AI robot movies like Short Circuit and Wall-E, I focused on the heartfelt part and therefore ended up enjoying the movie quite a bit.

Based on Blomkamp’s short film, Tetra Vaal, Chappie takes place in the near future where Johannesburg has resorted to using robots in their police force to combat the increasing crime rate. One particular unit gets damaged beyond repair during a crime raid, and the robots’ creator, Deon Wilson (Dev Patel), takes this opportunity to test his new AI program. Meanwhile, desperate gang members Ninja and Yolandi (played by Ninja and ¥o-Landi Vi$$er of the rap-rave group Die Antwoord playing violent criminal versions of themselves) half-bake a plan to kidnap Deon and instead end up taking in this new artificial life form they name Chappie (voiced by Blomkamp regular, Sharlto Copley). The Maker and the gangsters form an implausible symbiosis where each member tries to teach and influence Chappie to lean toward their differing senses of morality exposing Chappie to best and the worst of humankind, but in the end, it’s Chappie’s own choices that make him the most human. Hugh Jackman plays Vincent Moore, a rival engineer looking to sabotage Wilson’s police robots to promote his own model, The Moose, a much more militaristic police robot in the spirit of, and similar in design to, the ED-209 from the Robocop films. There’s one more antagonist in the film, another gang leader threatening to kill Ninja’s crew, but I didn’t quite catch his name but found it sad that American theaters subtitled his English when it was Ninja’s accent I could not clearly make out.

The music score by Hans Zimmer is a well-composed mix of industrial sounds to match the robots and haunting melodies to indicate the soul within. The CGI is terrific but not too different from the robots in Elysium save the Appleseed-inspired antennae ears. These robots look much more like they’re physically there than did the “prawns” in District 9, and perhaps that’s a result of adding robots instead of organic creatures. (Was anyone convinced when Jabba the Hutt was inserted into Star Wars: A New Hope?)  The difference from Elysium here is that Chappie‘s script calls for intimate, human-robot interaction, and they did quite a convincing job of that. 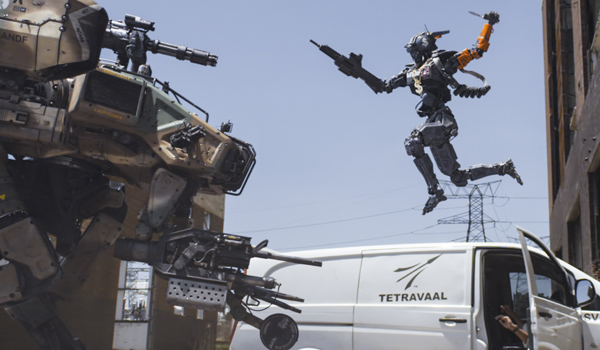 Copley’s voice out-acts Chappie’s human counterparts, and Sigourney Weaver‘s role could’ve been performed by any stage monkey. However, maybe because he’s allowed to use his natural accent, Jackman as Moore displayed much more believable seething rage than he ever did as any Wolverine. I don’t mind that the better-known actors were sidelined in less meaty roles since there were plenty enough distractions from the narrative already, but sometimes Ninja and Yolandi seemed to be corn-balling it. It’s fine if you’re having fun making a movie in a ridiculous tongue-in-cheek style of Django Unchained, but there’s simply too many heavier themes in Chappie to allow for it.

Speaking of heavier themes, and despite the fact that I am recommending this movie, Chappie is undeniably a mess of two or three movies trying to be one.  The cheesy silliness doesn’t mix well with the graphic brutality nor the social commentary of rampant South African crime. Chappie acting like a gangster is supposed to be adorably funny but came off as saddening and repulsive as his teacher, Ninja. Ninja acts like the film’s villain but at some point, we’re supposed to feel sympathy for him as though he was a protagonist all along, but neither the story nor his acting (nor his general likability) is convincing of that. Yolandi is the mother figure who teaches her adoptive robot child about love and caring but nonetheless gloriously touts a pastel pink uzi to commit a violent robbery after the fact. The two rival engineers maintained the most consistent and plausible character arcs but there’s already so much going on, they were almost a side note.

So what’s good about the film? Chappie’s heartfelt arc. That should be the most important aspect anyway since it’s his movie and his story. Also, it’s an eye-opening reminder of the struggles in other industrialized countries of the world to whom we First-Worlders rarely pay attention. This isn’t Blomkamp lazily taking us back to the same fictional high-inequality society that he showed us District 9 but rather Blomkamp reusing the backdrop of the non-fictional, prevalent, and virtually unchanged high-inequality society of a very real South Africa. To Americans, between the accent, the fashion, the lingo, the music, and the ethnic variety of South Africa, we feel like we’re transported to a world more foreign to us than The Middle Kingdom or Pandora, and while it’s sad that we might not believe it to be real, it’s entertaining for us to temporarily escape from our current reality. It is therefore a tragic, ignorant irony that I found this movie so entertaining.

Do not be fooled by the film’s tagline, “Humanity’s last hope isn’t human,” as this film is way more microcosmic and there’s no extinction threat to humankind in this movie, but be you entertained or unsettlingly educated by it, you should catch Chappie.

Do you like sci-fi movies with too much social commentary? Does Chappie do too much or too little?  Who’s your favorite sentient robot? Sound off in the comments or send us your thoughts on Twitter!