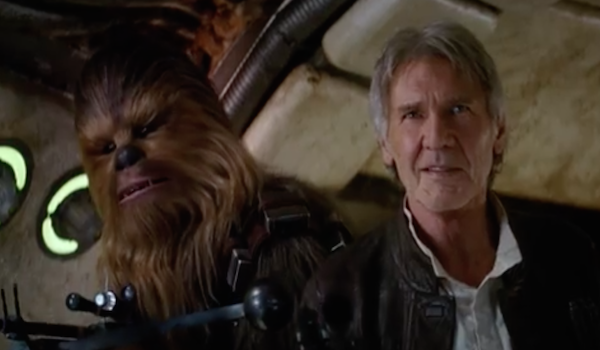 I can already tell that those words are going to be immortalized in Star Wars lore for years to come. I must’ve watched the newest Star Wars: The Force Awakens trailer a couple dozen times since it’s release yesterday, but nothing induces chills like those final words by one of our favorite space outlaws. If you haven’t seen the trailer yet, then do yourself a favor and check it out right now. Go ahead; I’ll wait.

Such an outstanding two minutes. No matter what you thought about the first teaser that debuted back in November, you have to give it up for this second trailer. It has almost everything you could possibly want out of Star Wars. You get a look at both new and old heroes, you see several references to previous films, and you’re floored by some of the most gorgeous shots to ever grace cinema. If a trailer can do this much for me, I’m a little anxious to see what the actual film holds in store.

The trailer kicks off with a bang by playing the familiar score as the camera pans across a desert. We see a lone landspeeder streaking past a destroyed X-Wing half-buried in the sand and a crashed Imperial Star Destroyer taking up most of the landscape. 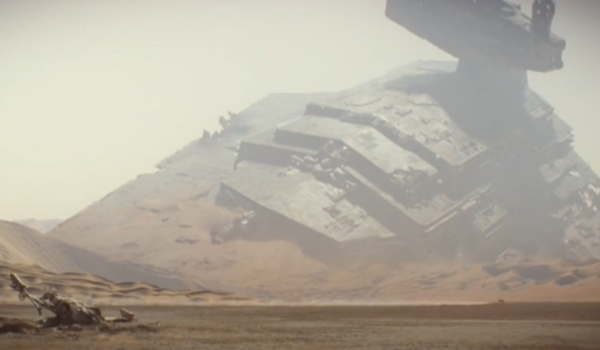 Out of every shot in the entire trailer, this has to be my absolute favorite. It’s a beautiful image that both demonstrates Lucasfilm’s outstanding visual effects, and reminds us of how the Galactic Empire is nothing more than a thing of the past.

As you delve further into the trailer, you see more going in the Star Wars universe. As of now, most of the plot is kept under wraps, but you can tell by the clip that trouble is brewing in the farthest reaches of the galaxy. It seems that there is a new Sith in town going by the name Kylo Ren. What Ren is up to exactly, we’re still not sure. But what we do know is that he’s got himself a bad-ass red lightsaber, and possibly an entire army of fresh stormtroopers ready to do his bidding. Who could possibly stop him?

We have some new heroes joining the battle in this latest installment. The two characters who seem to be at the central part of this film are female scavenger Rey, played by Daisy Ridley, and stormtrooper Finn, played by John Boyega. Lucasfilm and Disney are doing a great job at keeping the film’s plot a secret, so we have to play a guessing game as to what’s going on between these two protagonists. Whatever it is, it looks like it’s going to be fun!

If you’re not a fan of the new entries to the Star Wars franchise, don’t worry. There are numerous callbacks to previous films that are bound to make you squeal with delight. During the opening narration, we catch a cloaked figure with a metal hand resting on R2-D2. It’s safe to assume that this is none other than Luke Skywalker (unless metal hands and R2 units are a hot commodity in a galaxy far, far away.) There is another beautiful shot of Darth Vader’s destroyed helmet laying on a pedestal. Eerie, yet visually stunning. I’m guessing Luke has held onto this memento to remind himself of where he came from, and what he should avoid becoming. 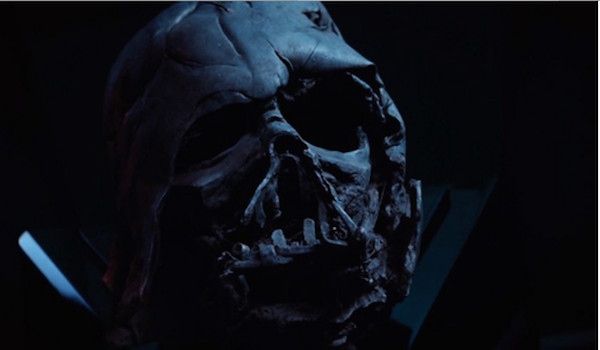 One of the things I abhorred about the prequel trilogy was the over-use of CGI. I’ll admit that a little CGI is good, and in this era, it’s smart to utilize all your technology to give a visually stunning film. However, there is a limit, and the prequels pushed that limit to the breaking point. Thankfully, it looks like The Force Awakens is taking a step back and not going overboard when it comes to CGI. Everything looks so natural and smooth. Of course, there’s going to be heavy computer-generated imagery here and there, but I’m praying it’s not as obvious as the clonetroopers from Revenge of the Sith. So… much… CGI.

I can’t end the review without talking about the iconic last scene. Just before the title, there’s a brief second of darkness, and then we hear a familiar gruff voice utter, “Chewie, we’re home.” Cue shot of Han Solo and Chewbacca as the latter gives his signature growl. I think for most people this was the best shot of the entire trailer, and I honestly can’t blame them. For the hardcore fans who have been with the series since the very beginning, this is the first time in decades that they’ve seen these two back in action side by side. As I’ve mentioned, nothing strikes a chill in my spine like this scene. Solo’s words may probably be the next memorable line to come out of the franchise since “No, I AM your father!”

I’m thrilled to see the next chapter of the epic Star Wars saga. A lot of people are hesitant because of Disney’s takeover of Lucasfilm, but I think that it was a smart move for both companies. Maybe, just maybe, this new film can turn out to be as fantastic as the originals. I know that’s a bold statement, but I have a lot of confidence in J.J. Abrams and co.

What were your thoughts on the Star Wars trailer? What was your favorite part? Tell us in the comments or on Twitter!