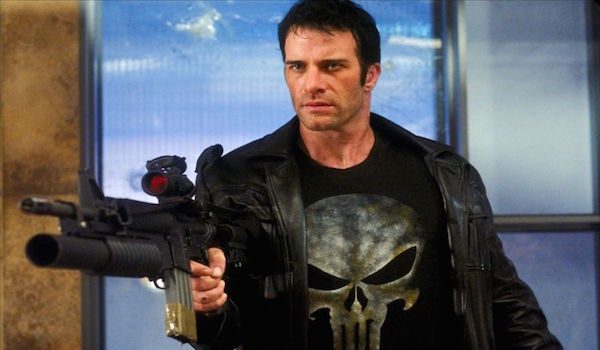 Back in the early 2000s, comic book films were striking gold at the box office. Movies like Spider-Man and X-Men were drawing audiences by the truckload, and studios wanted to grab some of those profits. The Punisher was an incredibly risky endeavor for three reasons: it was a film based on a relatively minor comic book character, it was pretty violent and not exactly kid-friendly like other comic films, and the character had already suffered a poor adaptation back in 1989. Nonetheless, director Jonathan Hensleigh stepped forward and bravely decided to helm the project, and it was actually a decent film.

As you can guess, The Punisher is your basic origin story. Frank Castle is a special forces operative with a plethora of special skills and abilities that essentially turn him into a walking weapon. As Castle is conducting a sting, things get out of control and the son of Tampa mob boss Howard Saint is killed. Saint uses his connections to find out Castle’s involvement, and then orders his men to slaughter his entire family. While everyone else is killed, Castle survives and vows to punish Howard Saint and all those involved.

In the original comic run of the Punisher, only Castle’s wife and two children were killed, which prompted him to take up his vigilante ways. The film went even further by having his entire extended family brutally murdered before his eyes, including his own parents. Some people may have complained that it was too much for the film and that killing off the whole family was too dark, but I felt it was appropriate for setting up the motivation for such a ruthless antihero as the Punisher.

Thomas Jane did a phenomenal job as the Frank Castle, but I wouldn’t call him the Punisher, much like how I would say Hugh Jackman is a great Logan, but not Wolverine. The Punisher is lethal. He doesn’t have qualms about killing anyone who he considers evil. In this film, Jane lets too many people off easy. There is one scene where he busts Saint’s money-laundering scheme and forces his accountants to toss the money out the window. The Punisher would’ve thrown the accountants out with it. There’s another scene where Castle confronts his neighbor’s abusive ex-boyfriend and lets him off with just a punch in the face. The Punisher would’ve broken his kneecaps, if not cut off his fingers. Regardless, I loved Jane’s performance even if he wasn’t the character we envisioned from the comics.

The character of Howard Saint was made up for the film, but he appears to be an amalgam of most of the mob boss villains from the Punisher comics. John Travolta is an excellent villain, which came as a shock to me because I mostly remember him as a quirky actor from movies like Saturday Night Fever and Look Who’s Talking. Hell, even his role in Pulp Fiction was a little on the light-hearted/silly side. In The Punisher, he’s absolutely vile. It’s fantastic. He’s someone you can’t wait to see get beaten to death by the hero. My one gripe is that I wished we had a bigger climax between him and Castle (I’ll explain shortly). 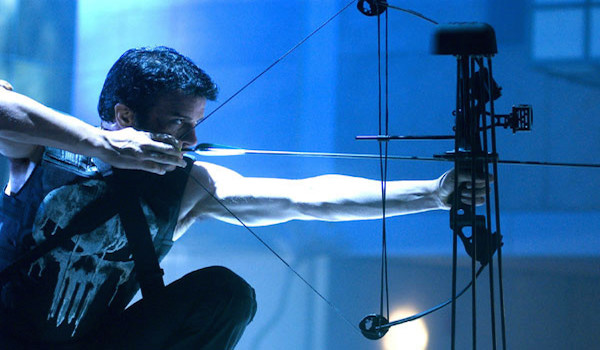 A good chunk of the film revolves around Castle meticulously planning how he is going to punish his family’s executioners. He does this by blowing up shipment boats, taking out Saint’s hitmen, and turning Saint against his own wife and best friend. The best part of the film is when Saint sends a giant hitman named the Russian (played by Kevin Nash) to take out the Punisher once and for all. The fight takes place across Castle’s apartment building and involves the use of a lot of improvised weaponry including a toilet bowl and a pan of scalding hot soup, all to the tune of Peter Dvorsky‘s “La Donna E’Mobile”. It’s such a great scene, and it says a lot about Castle’s ability to take a beating and still come out on top.

Another great scene is Castle’s final attack on Saint and his men. After days of planning and coordinating. Castle successfully tricks Saint into thinking that his wife is cheating on him with his best friend. Saint kills both of them, and then retires to his penthouse to relax and party with his cronies. With all of his targets in one place, the Punisher springs into action and uses a bow, sawed-off shotguns, anti-personnel mines, and his knife to carve his way through the party.

The final confrontation involves Castle and Saint in a classic Western showdown as both fighters prepare to draw their guns. Naturally, Castle draws quicker and scores a fatal hit on his opponent. Right before Saint dies, the Punisher ties his leg to a car, sticks a mine onto the back of it, and places it in drive. The car drags Saint’s corpse through the parking lot as the mine explodes, and dozens of other cars follow suit. The last shot is an overhead view of the parking lot explosions with a fiery version of the Punisher’s trademark skull symbol. It’s as cheesy as Batman’s flaming bat-signal in The Dark Knight Rises, but it’s still awesome!

As I mentioned before, I would’ve liked to have seen a more physical confrontation between Castle and Saint at the end. A short fist-fight would’ve been satisfying, though it would most likely have been severely one-sided. I also would’ve liked a more brutal Punisher. That’s one of the few aspects that Punisher: War Zone did better than this film.

The Punisher is not a bad film at all, but there are plenty of ways it could’ve been better. Now that the character has reverted back to Marvel Studios, it looks like we’ll be getting yet another incarnation. After watching Daredevil, I’m confident that Marvel could do the Punisher justice and portray him as brutal and merciless as he should be. For now, I’d consider The Punisher more of a Frank Castle film rather than a Punisher film.

What did you think of The Punisher? Was it a worthy film for the character or did it fail to capture Frank Castle? Let us know what you think in the comments or on Twitter!