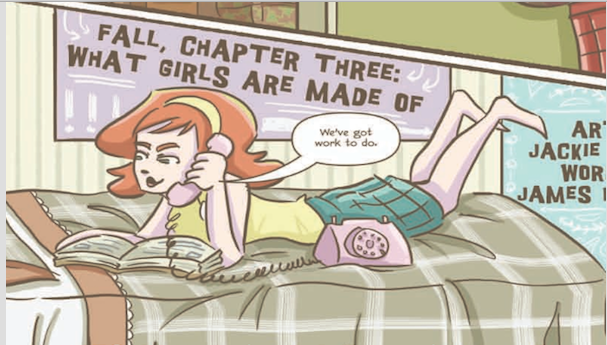 I was so happy I got the chance to review the third issue of Nutmeg since I had such a fun time with the first two installments. This comic is about more than just two girls baking brownies. It’s a story about cunning, deception, friendship, rivalry, and morality. One of the best ways to truly describe it is as a combination between Mean Girls and Breaking Bad. If you haven’t checked out the first two issues, go do that now, and then pick up this latest chapter in the Nutmeg saga to see what happens with our bake-worthy heroes. (spoilers ahead!)

Quick plot refresher: Cassia and Poppy are two outcast high schoolers who want to defeat their rival, preppy popular girl Saffron, in an event called the Brownie Brawl. In the last issue, we see Cassia and Poppy creating a batch of “specially cooked” brownies and dropping them off at Saffron’s crush’s house, hoping that he’ll get food poisoning and blame Saffron. However, in this issue, it turns out that the brownies not only failed to poison him, but they also triggered an intense addiction. Looks like Poppy and Cassia found a new way to win the Brownie Brawl that doesn’t involve them having to sabotage their rival’s batch.

This issue of Nutmeg had less to do with the actual cooking than it did with exploring the backgrounds of various characters. In the very first pages, we learn more about Saffron’s family and how her home life may have influenced her current personality. Her father is rarely home because he’s too busy working in a shady corporate venture, and her mom is extremely authoritative, demanding that Saffron address her as “ma’am” when talking to her. It really gives you a sense of understanding of what is going on within Saffron’s psyche. After all, nobody is born evil; there has to be something that affects their behavior. In this case, it’s Saffron’s own parents and somewhat tumultuous home-life.

This isn’t even the first time we learned about Saffron’s background. In the last two issues, Poppy actually explains to Cassia how the Brownie Brawl started with her mom and Saffron’s mom developing a rivalry. Saffron and Poppy were simply caught in the cross-fire, but they both handled it in different ways. Given this new information, I wouldn’t be surprised if Poppy and Cassia end up befriending Saffron at the end of the Nutmeg series once they discover the reasoning behind her attitude.

Speaking of Saffron’s home-life, her mom isn’t the only person who we should be keeping an eye on. In a strange twist, we find out in the first few pages that Saffron’s father also has a hand in the Brownie Brawl’s intense competition. I won’t spoil it, but once you stumble upon this plot twist, you’ll further understand what I mean when I say that Saffron is merely a pawn to her parents’ games.

In the last two issues, it seemed to me that Poppy and Cassia were front-and-center. I thought this was their story. In the third issue, the focus was heavily on Poppy. There’s a tragic yet touching scene where we see her visiting her mother and talking to her about what’s been going on at school, mainly regarding her new friendship with Cassia and the upcoming Brownie Brawl. The focus stays on Poppy some more as we also see her start to regret poisoning the brownies, especially once she learns how lethal they can be. Unlike Cassia, she has qualms about taking such a dark strategy for winning the Brawl and for exacting revenge on Saffron. It makes sense in the grand scheme of things since Poppy seems to be aware that Saffron isn’t evil and is mainly just acting on her mother’s influence.

The ending to the comic had a bit of a twist that I didn’t see coming. It takes a lighter turn than the previous installments since we’re straying away from the food poisoning concept, but there is still an essence of darkness when you realize exactly what’s going on. As always, I won’t spoil the ending, but I will say this: addiction can be deadly.

The plot was pretty straightforward, and it’s really easy to pick up this story and start reading. If you were a fan of the dark undertones from the first two issues, you might be slightly disappointed that this comic takes the lighter route. But, as I’ve mentioned, if you really think about what’s going on with this new plan, it can be very dark as well.

I can’t say much about the artwork except that it’s more-or-less the same as the first two issues. There aren’t any specific instances that I wanted to point out that really blew my mind, but I’ll give credit for how much detail goes into all of the panels. There is so much going on in each page that you may stop to marvel at all of the hard work put into designing the settings and characters.

If you’ve read Nutmeg‘s first two issues, you should pick up this one as well. The story carries on seamlessly and you’ll be able to jump right into the adventure with our two favorite brownie-baking saboteurs.

Have you checked out Nutmeg yet? What did you think? Let us know in the comments section or on Twitter!