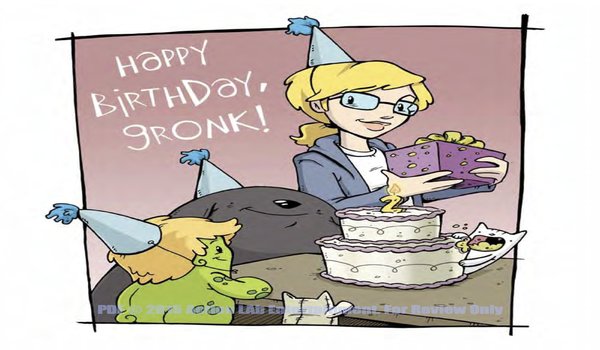 Gronk! It looked so cute when I saw it so I had to give it a chance. Outside of the ordinary action packed superhero theme comes Gronk, a cute little monster that lives with a human girl, a cat and a big abnormal dog. Upon receiving vol. 2 of Gronk, I soon realized its story is interweaved through comic strips similar to the style of Garfield. So let’s get to the center of the toostie pop! 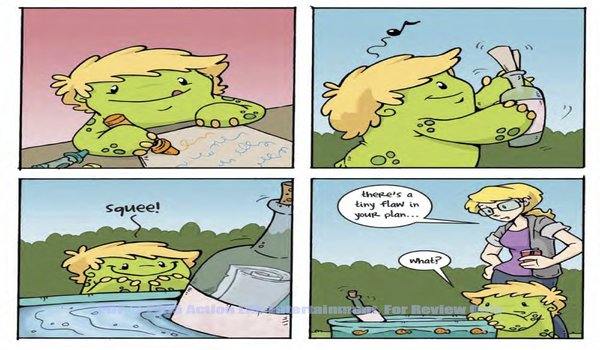 There’s rarely any linear storytelling in this comic due to the fact that it’s meant to be a small strip on a newspaper or back of a comic book. The strips consists of a bunch of slice of life stories that can be told either through one panel or multiple panels and sometimes it stretches to multiple strips depending on how big the slice of life is. It tells the adventures of Gronk, discovering life’s mystery despite being…very old. He displays a very childish mindset compared his human counter part, Dale, who is more like an older sister or motherly type in the story.

Often he is very similar to Garfield in the ways of trying to do something witty to bother Dale whilst keeping its innocent persona. I think the childish view of approaching things make the comic very enjoyable, however, adding the element of the snarly Garfield type, makes it a bit difficult to read. The difference between Gronk and Garfield is that Garfield never comes off as a child. He is a cat that displays adult-like view points and sometimes…wise. Gronk, however never displays any wisdom, rather the opposite. Thus creates this awkward witty, snarl polar conflicted character that just seems out of place. Often the jokes get awkwardly placed because of the conflicted character design and get flown over one’s head. 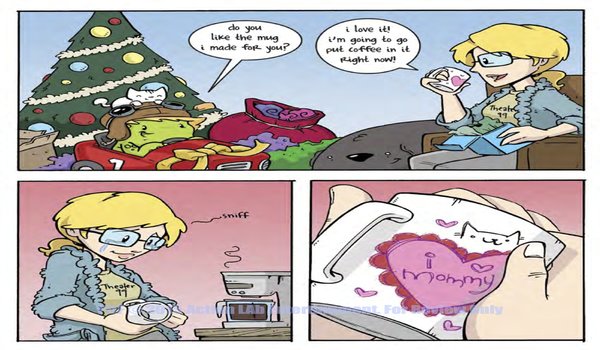 I love the design of Gronk and his friends. It appeals to adults and children alike and makes it easy to pick up and put down. The simplicity of the characters make it very marketable in future products as well. There are very few lines and they’re easy to draw and replicate. The conflicted character design of Gronk however will throw adults into a loop with some of the storylines since the personality types do not simply match. I often got this confused mindset when reading these strips whether to treat Gronk like a child or a misunderstood adult.

Maybe I missed something jumping into Vol 2. without properly introduced to the character in Vol 1. but with comic strips, that shouldn’t be an issue. With Peanuts, you can easily pick it up and read from any volume and still understand each and every character design and background without having to be fully indoctrinated in each character background. This story however lacks the simple character backgrounds that can propel the audience right into the story without having the proper indoctrination. With its protagonist suffering from personality disorder (The conflicting personality traits), I cannot immerse myself fully without coming out confused and distraught. 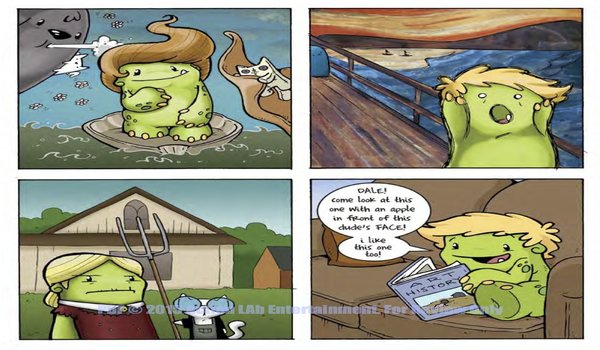 In conclusion, the comic strip is fun and witty if you ignore certain minor issues that deal with the character itself. You can pick it up and read it and put it back down without having to invest much time to it. However, investing too much time into understanding the character and reading it in bulk will start to give way to its flaws in its character background and pave a way for the audience to see where the author is trying to go with the character and review its flaws along the journey of a volume. I’d recommend this to children starting out on comics because its easy to read and easy to eye. For adults, I’d rather pick up Garfield since it has a much better character understanding and defined character goal.

If you feel indifferent about my review, please comment below! And be sure to let us know on Twitter!