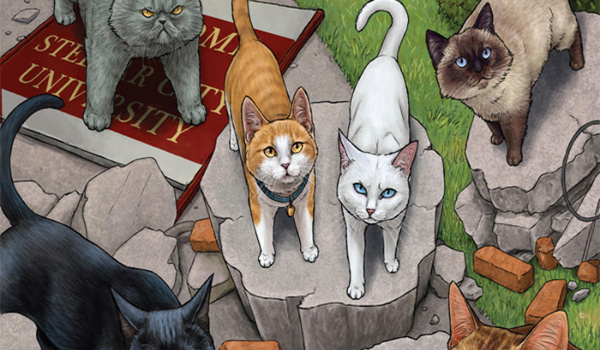 Today we will be taking a look at Hero Cats of Stellar City #6: “Mystery on Campus.” Closing in on half a year’s worth of cat “tails” (see what I did there?), Kyle Puttkammer‘s Hero Cats of Stellar City gives readers an in-depth look at the secret lives of our fine, furry, often enigmatic feline friends. And believe me, it’s totally not what you’d expect! So without further ado, let’s get started.

In this issue, Ace, Cassiopeia, Rocco, Belle, Midnight and Rocket take on a mystery involving an invention created by Professor Tabart that has gone missing. During their mission briefing, the Hero Cats learn that the good professor was working with a machine called the “macro-nutriator,” which can be used to enlarge food in an effort to battle world hunger. With local authorities confounded, it’s up to the Hero Cats to locate the missing contraption and save the day.

Rather than being ultra-anthropomorphized versions of cats with Jim Lee level physiques that wear four little boots, the Hero Cats hide in plain sight as your average, mild-mannered house cats. Only, they possess seemingly above-average intelligence in their ability to communicate with one another using human language. I thought it was interesting how none of the humans in the story seem to be able to hear the Hero Cats speaking to one another. Maybe this is Puttkammer’s jab at man’s hubris, and that despite being a relatively new species, humans believe themselves to be the superior model of life on Earth? Okay, maybe I’m going too far with that (or maybe not). Nevertheless, the use of animals in the hero archetype works well in this book, and sort of reminds me of some of Aesop’s Fables or The Get Along Gang (remember them?). That’s a good thing.

During the course of the simple, yet serviceable, plotline, the gang encounter a few very human dilemmas, and this is where Hero Cats of Stellar City is at its best. The themes of teamwork, overcoming fears, and relationships are engaged in a way that younger readers can understand, all while never derailing the main plot. And speaking of the main plot, world hunger is an important issue that may be a problem for certain individuals to quantify if it doesn’t hit home in some profound way. Having the Hero Cats confront this topic is an interesting and fun way to bring it to light, and a virtuous endeavor, indeed.

The art in Hero Cats of Stellar City is simple, yet effective. Marcus Williams and Ryan Sellers do a great job of capturing the essence of cats in their various movements and expressions, while Omaka Schultz‘s colors are bright and vibrant, and pleasing to the eye. The first panel on page 11 is my personal favorite. I must reiterate that it was a good decision to keep the cats as close to life as possible in their appearance; Hero Cats of Stellar City is allowed to be over the top, but it never jumps off the cliff.

Whether you are a young comic book fan, or a thirty two year old cat and comic book fan, Hero Cats of Stellar City hits all the right marks. It’s fun to imagine our pets engaging in “human” activity, and more plainly, it’s in our nature as humans to do so (please see any human that dresses their dog in clothes…and stop them). Yet, the themes that Hero Cats of Stellar City engages are what set it apart from the overload of fluff content aimed at younger readers. I also thoroughly enjoyed the fan interaction in the closing pages of the book.

Lastly, my personal favorite moment in this issue of Hero Cats of Stellar City is during Ace and Rocco’s investigation of Professor Tabart’s lab when Ace mentions Cassiopeia’s importance to the team. Ace says: “…she sure loves to read…she’s pretty smart, that Cassie. She’s a real asset to the team.” It’s true kids, keep reading!

Issues of Hero Cats of Stellar City can be purchased here, along with some cool merchandise! Check it out!

What did you think of the latest issue of Hero Cats of Stellar City? Let us know in the comments section and on our Twitter page!