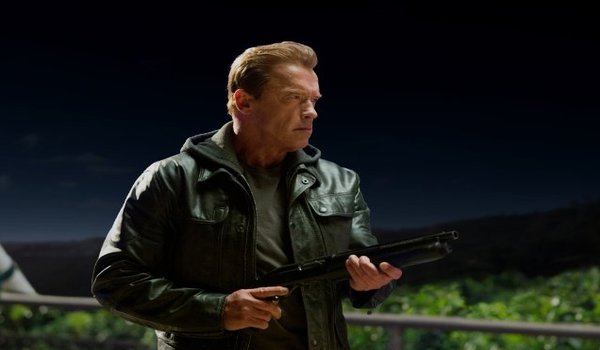 He said he’d be back and here he is. Arnold Schwarzenegger returns to the franchise that made him a household name. Terminator Genisys (pronounced “Genesis”) is the fifth installment in the wear-and-tear Terminator series, bringing some new life to the dying series, revisits a lot of material that has already been seen, and yet turns it on its head as well to bring some new thrills and fun. Terminator has always had a strong premise – killer robots time travel to prevent the birth of a freedom fighter who will lead to their destruction. It’s a bit more complex than that, but Terminator Genisys adds another element to the story, ala, remaking scenes from the first two movies and playing them out differently thanks to characters retroactively knowing what’s going to happen.

Our story is familiar but a little different. It is 2029, Judgement Day happened, and the world is now ruled by malevolent machines ruled by a sentient computer AI named Skynet. Humanity’s last hope is John Connor (Jason Clarke), leader of the resistance who was made aware of the future by his mother Sarah Connor. In the last battle to crush Skynet, John learns a Terminator T-800 (a young digitized Schwarzenegger) has been sent back to 1984 to kill his mother, preventing his own birth. John sends his friend Kyle Reese (Jai Courtney) back in time to protect Sarah and warn her of Judgement Day. It looks like we are about to go through a remake of The Terminator, but as soon as Kyle arrives in the past, things take an unexpected u-turn.

Kyle is suddenly attacked by the T-1000 (Lee Byung-hun) from Terminator II, still disguised as a cop but lacking the subtlety and indestructibility of Robert Patrick’s version. After Kyle and a couple of hapless policemen get cornered by the T-1000, but who should come to Kyle’s aid but Sarah Connor (Emilia Clarke), not the helpless woman expected but actually trained to combat Judgement Day from the age of nine. By whom you may ask? Why, it’s another T-800 Terminator (also played by Schwarzenegger) nicknamed “Pops” who was sent back in time to protect her from the other Terminators, whom he quickly dispatches minutes after its arrival in 1984. Kyle learns that the entire timeline has been changed for some reason, and Sarah plans to go to 2017 to prevent the activation of a new worldwide operating system called Genisys, aka, Skynet. There’s also a subplot featuring J.K. Simmons as a cop who Kyle and Sarah saved in 1984 and wants to prove the existence of time travel.

Genisys is essentially what people think the Cloud will be in a few years, encompassing all of the world in one network. Perfect for Skynet’s takeover. Genisys was developed by Danny Dyson (Dayo Okeniyi), son of Miles Dyson (Courtney B. Vance), though their presence in the story has zero impact. Yeah, Dyson’s heroic sacrifice in Terminator II was still all for nothing. Terminator Genisys is heavy on two things – pointing out how everyone is way too obsessed about being online all the time, and retreading the third act of Terminator II by blowing up Genisys’ facilities. The cool chase scenes occur beforehand though, involving our heroes being chased by a Terminator in a helicopter battle, that ends with Arnie uttering his classic line and sky-tackling the enemy chopper.

Despite the large amount of stuff it has to juggle, including a plot twist that was unfortunately spoiled by the trailers, the film manages to keep a good pace. The only problem is that it sacrifices the all-important character development that helped make the first two films so good. The action scenes are fast and frequent, very fun and exciting. The convoluted timeline now means characters can meet up and the various Terminators can duke it out like never before. However, there is only the occasional feel of dread in these sequences. The characters suffer from video game immortality, and even when they are dangling over the Golden Gate Bridge in a bus, they look unharmed. Acting is a mixed bag. Emilia Clarke, Jason Clarke, J.K. Simmons, and Arnie are all great in the film, and Matt Smith appears in a pivotal role. It is Jai Courtney who unfortunately gives the blandest performance. You could’ve replaced him with Channing Tatum or Sam Worthington and I wouldn’t have noticed. And as for Arnie, well, he’s Arnold Schwarzenegger. Great fun and still able to handle the action.

The film’s visuals are always engaging and the chemistry between the three main protagonists is enough to keep an audience invested, even if character development is thin on the ground. There is a scene where Sarah attempts to bond with Kyle by recalling her past and how Pops has always been there for her, but Kyle’s justified paranoia and lack of clarity ruins the moment when he comments that Pops is just a machine. The film also borrows a few things from other movies. For instance, the bus chase sequence seems to take inspiration from The Dark Knight, Rise of the Planet of the Apes, and The Lost World. San Francisco sure has been taking a lot of abuse in recent years.

So, is Terminator Genisys worth the watch. I’d say yes. It can be dumb and confusing at times, but has good acting, fun action sequences, and Arnie is back where he belongs. Terminator is a franchise that needed some new life, and I believe Terminator Genisys at least manages to give it a new coating of paint. As Pops says in the film, “Old but not obsolete.”

What are your thoughts on Terminator Genisys, and the franchise in general? What would you like to see in future films? Sound off in the comments below or visit our Twitter feed.