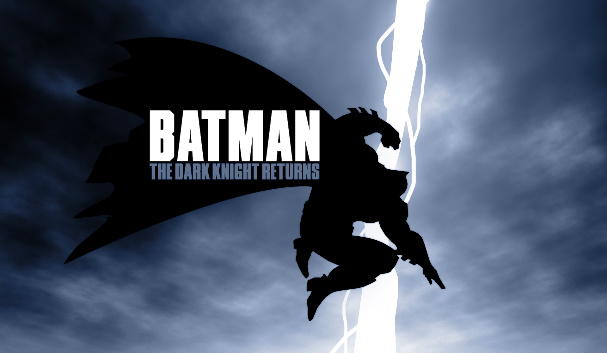 If there is one thing that DC Comics has over Marvel at the moment, it’s their animated features. Despite Marvel’s ever-growing popularity due to the success of their theatrical releases and kid and teen friendly comics, their animated films seem to fall short in my opinion. In what can be considered DC’s most ambitious animated film to date, The Dark Knight Returns may not be the best that the DCAU (DC Animated Universe) has to offer, but it does happen to be based on what is arguably the most important Batman story to date, as Frank Miller‘s The Dark Knight Returns was directly responsible for Batman’s return to form at the time of its publication. The question is, does DC’s adaptation of this pivotal work stand up to Miller’s 1986 classic? Moreover, are the themes that were explored in The Dark Knight Returns still relevant today? Fear not, for the answers to these questions can be found below, and with no major spoilers!

Let’s start with what’s on the surface. The Dark Knight Returns features some of the best art direction and animation that we’ve seen from the DCAU thus far. It really feels like this film takes place years after the events of the great Batman: The Animated Series‘ conclusion, especially in the way that Bruce Wayne/Batman and Commissioner Gordon are drawn. Christopher Drake‘s score is also worthy of note, and perfectly complements the aesthetic of the film, perhaps even more so than some of his other work in the DCAU.

Like many of DC’s other animated films, The Dark Knight Returns‘ voice cast is simply incredible. Peter Weller plays the aging Batman with confidence, and while he chose not to emulate the dynamic range of Kevin Conroy, Weller’s often subtle performance reminds us that this is a Batman who has not only faced the worst of what Gotham City’s darkest alley ways can muster, but who is still ever-prepared for whatever evils still lurk beneath its surface. Michael Emerson‘s maniacal and unhinged Joker works well alongside Weller’s Batman as his eternal antithesis, although at certain points I find myself wanting to hear Mark Hamill or even John DiMaggio‘s interpretation of this version of the character, if only for curiosity’s sake.

In order for DC to be able to adapt The Dark Knight Returns into a film that can be viewed by just about anyone except perhaps the youngest of Bat-Fans, certain scenes of violence were toned down or removed entirely, while the language was altered slightly to secure a PG-13 (U.S.) rating. Fortunately, this has little to no effect on the overall feel of the story, and the film does a great job of staying surprisingly accurate to the source material. Some scenes were extended for the film, most notably when Batman confronts “The General” about illegally selling weapons to the Mutant Gang, which was something that we didn’t really get to see in Miller’s book. I also found Batman’s battles with the Mutant leader to be more satisfying in the film, since we get to see exactly how hard Batman hits. It’s sometimes a matter of give and take between the book and the film, but both are satisfying enough in their own ways.

The usual theme of duality that traditionally stems from superheroes possessing “secret identities” is deconstructed in The Dark Knight Returns. The story builds upon the concept that Bruce Wayne exists as “the mask,” while the true, singular identity of the Caped Crusader is, in fact, Batman. In the film’s opening scene, we see a “suicidal” Bruce Wayne who is pushing his race car to its absolute limit. Of course, when his car careens out of control and flips down the race track, Bruce is able to escape just before the vehicle winds up a flaming coffin of twisted metal on the asphalt. It appears that the “retired” Batman is rearing his cowled head, still seeking thrills wherever they can be found. Not only that, but Batman doesn’t seem to like Bruce’s new mustache too much, and shaves it before leading his thrall into the depths of the Bat Cave once more, tempting him with its dark, cavernous glory. Clearly, The Dark Knight Returns is less about Bruce Wayne bringing Batman out of retirement, and more about Batman having an identity crisis as Bruce Wayne. As Bruce stares into the proverbial abyss, he proclaims: “You’re never finished with me,” and doesn’t blink. Props to Nietzsche on that one.

With Bruce Wayne out of the way, Batman is able to embark upon what may be his final confrontation with his arch nemesis. The Dark Knight Returns does an excellent job of depicting the oddly synergistic relationship between Batman and the Joker. On two sides of the same coin are Batman’s order and the Joker’s chaos; either side unable to exist without the other. The ongoing struggle never felt as dire as it does in The Dark Knight Returns. It also appears as though Gotham City would have been spared the Joker’s merciless lust for death and destruction if Batman had simply stayed in retirement, as the Joker, only upon hearing of Batman’s reemergence, comes out of his catatonic state to wreak havoc once again. Now that’s something to think about for a while.

Frank Miller often uses the same tropes in his stories: paranoia, fear, civil unrest, inner conflict. Throw in some satire of Reaganomics in 1980s America and you’ve got yourself one boiling hot, virulent and extremely potent concoction for The Dark Knight Returns. The story truly is a product of its time, and serves as a portal into that era for those who were too young to bear witness to it. Yet, much of what is explored in the film holds true today. During times such as these, with society lingering on the edge of frenzy, what is our recourse? To follow blindly the order of the mainstream is to walk blissfully towards our own demise. No, it comes from somewhere underground; righteous and vindicated as it erupts onto the surface. It wins.

All in all, I find The Dark Knight Returns to be an excellent adaptation, and for those who are unable to get their hands on Miller’s 1986 book (ProTip: use Internet machine), it serves as a more-than-serviceable alternative. Whether you are a fan of Frank Miller, the DCAU, or just Batman in general, this film is a must-have. No, seriously, go watch it right now if you haven’t seen it yet. If you don’t think it’s totally awesome, I’ll eat my shoe.

What are your thoughts on this entry into the DCAU? Yea or nay? Voice your opinions in the comments section and on our Twitter Page!