Home » Challenging Hollywood: The Dark Knight and the Philosophy of The Joker 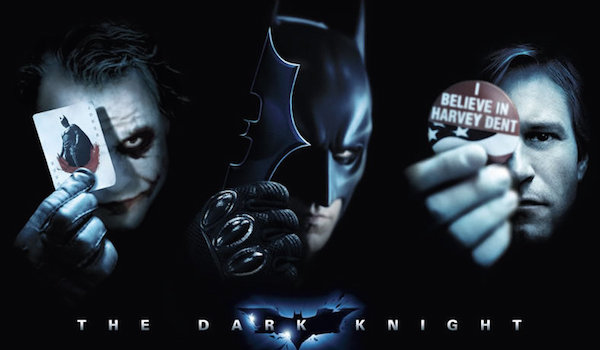 There’s a point somewhere in the middle of Christopher Nolan’s The Dark Knight when it becomes more than a supremely slick Hollywood action movie based on a rich comic book legacy. The Joker, in a prison cell after one of the all time greatest movie car chases, leans across the interrogation table and whispers to Batman “you complete me.”

I happened to be a student of literature when The Dark Knight was released, and my critical faculties, slumbering gently as my eyes and ears enjoyed the feast of special effects, were jolted rudely awake. The sudden injection of near romantic dialogue between two sworn enemies, the implication that the Joker with all his otherness and strangeness may have a connection to Batman (our “hero”) – this was something from the pages of literature. What was it doing here?

Put it this way, you won’t find such gleeful subversion in The Expendables.

It turns out that Heath Ledger’s Joker, this “two-bit whack-job in a purple suit and make-up” as an accomplice calls him, is more serious than his calling card suggests. He even has a thesis: “You know what I noticed” he tells Harvey Dent later in the film, “nobody panics when things go according to plan – even when the plan is horrifying! … a truckload of soldiers are blown up, nobody panics, because it’s all part of the plan … I’m an agent of chaos, and you know the thing about chaos – it’s fair.”

By politicising the Joker in this manner – an enemy of civilisation and its hypocrisies – Nolan raises The Dark Knight to a higher sphere of art and entertainment. No longer are we simply rooting for the “good” guys to defeat the “bad” guys; we’re engaged in issues that go beyond individuals and even the city of Gotham itself. Since the Joker is hell-bent on undermining civilisation, we are drawn into consideration of what constitutes civilisation and why it is superior to Hobbes’ anarchic state of nature, one of the key questions of philosophy.

In other words, we’re actually using our brains and thinking about things rather than watching good-looking people blow shit up.

It gets better, too. The Joker gets beneath Batman’s skin in a way that is exhilaratingly tangible. “You have nothing to threaten me with, nothing to do with all your strength,” the Joker smirks in the interrogation scene. “I have one rule,” Batman hisses in return, clearly on the brink of losing it. “He’s under control” Commissioner Gordon attempts to reassure the watching cops, sounding like he’s trying to reassure himself.

In the end, it’s Harvey Dent who loses it. Gotham’s DA, labelled a “white knight” early on, goes rogue after an explosion hideously burns half his face and transforms him into Two-Face. Ingeniously, Dent’s split visage now provides a visual representation of the struggle between the “good” Batman and the “evil” Joker, taking the film into Jekyll and Hyde territory thematically. In the closing scenes of the film Batman and Gordon literally stare the duality of human nature in the face as they stand over Harvey’s dead body. Sombre with recognition, they tilt Dent’s face till only the human side is visible and vow to cast him as the hero of the piece.

The Dark Knight was critically acclaimed, hyped to the rooftops, and made enormous amounts of money. Its successful fusion of classic action tropes and genuine thematic content poses an obvious question: why doesn’t Hollywood do this kind of thing more often?

Who decided that movies exploring the collective concerns of humanity should be classed as “indie” and funded by college whiparounds while the budget of the latest Fast and Furious (brief thematic summary: idiots crash fast cars) could end the refugee crisis? Why are we just delivered brains or brawn in movies when, as my total failure in the dating market attests, people want brains and brawn.

Comic books got this long ago. The work of Alan Moore is known for its intelligence and depth, and Nolan has referenced Moore’s work on Batman: The Killing Joke as an influence on his trilogy. In the wake of The Dark Knight, a slew of superhero blockbusters followed – the Iron Man trilogy, the Avengers series and Man of Steel to name a few – exploring deeper themes than pre-Nolan blockbusters and representing something akin to a golden age in the genre of comic book adaptations.

Thanks to Nolan, superhero films now lead the way when it comes to intelligent action movies, putting the dumb (and dumber) side of Hollywood to shame. In this sense, The Dark Knight’s impact on the silver screen mirrors the effect of the Joker on Gotham – a vastly entertaining subversive force that exposes the absurdity of pre-existing rules by breaking them. “I think you and I are destined to do this forever,” the Joker tells Batman near the end.

What do you think? Tell us in the comments or on Twitter.