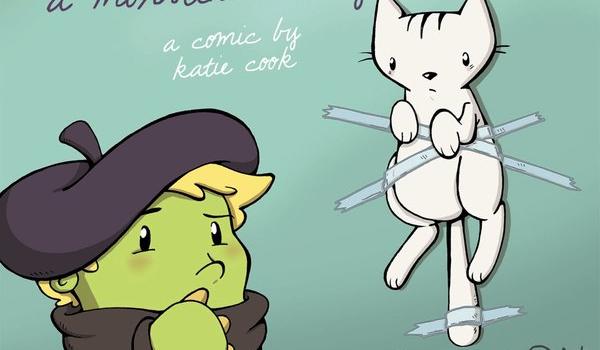 Here is the upcoming volume of Gronk by Katie Cook. What does volume three have to offer in this series?

In the previous volume, I had felt that the characters were less consistent and had many personality disorders compared to this current one. With volume three of Gronk, it was more relatable to the current events, culture, and trends, and because of this relation, it made the comic more enjoyable and entertaining. If the audience of this comic is meant to be for children and adults alike, it needs to be able to demonstrate different topics that both audiences of different ages can understand. Gronk does that very well, at least in this volume where it approaches both understandings and views of the children and the adults. It makes it very easy to read and skim through without having to sit and figure out the underlining joke that’s constantly going over our heads when reading it, like in vol 2.

In Gronk Volume 3, there is more consistency with Gronk’s character, which makes it more fluid in the story. He didn’t go through this bipolar personality disorder of figuring himself out. If the character cannot figure himself out, they cannot rely on the audience to figure that out, especially in a short, four-panel comic-book strip. This volume eliminated that issue by making Gronk see through the looking-glass of a child, and sometimes seeing things with an innocent perspective, which adults often can overlook. Gronk will sometimes say something very wise without knowing it, and that’s what makes him very likable since children sometimes do say things similar without knowing the full meaning.

At one point, Gronk says, “The problem with the world is stupid people are the loudest ones and the smartest people are the quietest ones.” This quote is so true with the world today. With the recent changes and protests over racism and minimum wages, it all started with the root of the uninitiated. People who are getting the short end of the stick are often at the bottom of the totem pole, and they’re shouting and wrecking havoc at someone else’s expense, while the smartest people are the ones who are quietly planning their moves behind the scenes. With this application of the modern world, it really makes us think that maybe Gronk is onto something? Maybe it should be the other way around where the smartest people should be more brave in their actions instead of letting the storm pass us by.

Overall, this edition of the Gronk volumes is definitely one of the more enjoyable ones. I can see the author improving and compromising with the audience about what she is writing for. Understanding where she stands in the demographic makes her a great author, and keeping up with current events also make her very powerful as well. Overall, Gronk Volume 3 is worthy of making its way onto your shelves, and if you’ve been a fan of the series so far, then you will definitely want to add this to your collection.

What do you think will come about in Gronk Volume 3? Do you have high expectations? Let us know in the comments or on Twitter!