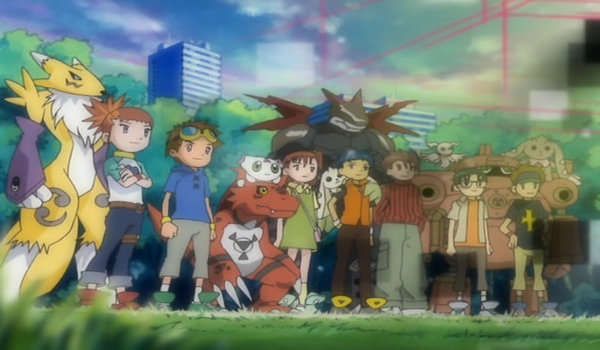 Digi-modify! Third part of DigiMonth, activate! Digimon Tamers is a horse of a different colour in comparison to its predecessors. The third season of Digimon Tamers is the best in just about every category: an amazing story, fantastic characters, dark and realistic themes not explored in the first two seasons, as well as elements of the Digimon universe that are deconstructed and examined. In fact, at times, Tamers can feel like a deconstruction of the franchise. Note, there are spoilers ahead.

This whole show was headed by talented writer Chiaki J. Konaka, who previously created the extremely confusing anime Serial Experiments Lain. Konaka believed that the Digimon in the first seasons were too lovable and harmless, so here they are reimagined more as dangerous monsters. Yes, they can still be friendly, wacky characters but they are still Kaiju-esque monsters.

The whole basis of the series is turned on its head for Tamers. Digimon are now more aggressive and hostile, digivolving has to be achieved through certain means and isn’t the simple switch on-and-off routine like before, and importantly, when a Digimon dies, it is permanent. No Village of Beginnings here, kiddies. The Digimon Tamers here have Digivices, but now they must rely on trading cards to give their Digimon power ups and new abilities, learning combos and stuff like that. It’s a good way to get more of the Digimon merchandise into the spotlight. Oh, yeah, I forgot to mention that the first two seasons of Digimon are now literally fictional in the Tamers universe, being television shows.

Our story is this – Takato Matsuki, an imaginative, artistic, but awkward boy, creates his own Digimon named Guilmon and becomes a Digimon Tamer. He quickly learns he is not the only Tamer on the block, meeting Chinese-Japanese student Henry Wong and his snarky partner Terriermon, and the ever-so-serious Rika Nonaka and Renamon, who at first only views Digimon as data and thus wants Renamon to be the strongest Digimon ever. Most of the early episodes deal with the Tamers encountering hostile Digimon that are bio-emerging into the real world, and must defeat them. Two other Digimon, the playful and innocent Calumon, and the mischievous Impmon, are both running around in the background and have larger roles as the series goes on.

Opposing, or rather simply observing the Tamers, is Hypnos, a Japanese government organization run by Mitsuo Yamaki, who always wears shades even at night. Yamaki views all Digimon as dangerous and naturally wants to destroy them all using a program called Juggernaut, which will attract all Digimon like a magnet and delete them (don’t forget Digimon are made of data). In the meantime, the Tamers deal with their relationship with the friends, Digimon, and normal life. Takato is very much like a child with his dog and keeps returning to this childlike worry that Guilmon will die or be taken away if they are separated for far too long. Henry doesn’t want Terriermon to fight since he is pro-life, and Rika just wants to crush Digimon to get stronger, though over time she comes to realise Renamon is more than just data.

Yamaki finally activate the Juggernaut (not that one!) but it backfires, allowing a number of powerful Digimon known collectively as the Devas to enter Earth to wreak havoc. Impmon is critically injured recklessly trying to attack one of them, revealing he once had twin Tamers but ran away when their constant bickering hit his breaking point. A large number of plot points occur one after the other – Henry’s dad is revealed to have helped create the Digimon, Takato’s friend and crush Jeri Katou becomes a Tamer partnered with the heroic Leomon, and Calumon is revealed to be the trigger for digivolving, thus leading to his being kidnapped by Deva Makuramon and taken to the Digital World. The Tamers rally to follow and rescue him.

Things become quite exciting but also dark, nightmarish, and even harrowing from then on. The first two seasons did some dark things, but Tamers punches you right in the solar plexus and leaves you writhing in pain. Impmon digivolves into Beelzemon, murders Leomon, and driven by Takato’s rage and hatred, Guilmon turns into something straight of a Lovecraft story. Eventually, it is revealed that a dangerous computer program, the D-Reaper, was imprisoned beneath the Digital World but has escaped to the real world after kidnapping Jeri and using her as a conduit to grow bigger and observe humanity. There is also the epic new version of DNA Digivolving where the Tamer and their Digimon fuse together to reach the Mega-level.

Even the ending, while epic, is also very bittersweet. The D-Reaper is ultimately defeated by using a Juggernaut-empowered Terriermon to reverse its growth, but at a cost. The Digimon must return to the Digital World or be destroyed. My favourite moment is when Henry’s dad appears to inform the children, and then apologises. All Henry does is turn with a sad smile and shakes his head, either telling his dad that he can’t apologise for this or he doesn’t have to. Henry’s dad then breaks down in tears. That is what makes Digimon Tamers stand out from every other season. Digimon Adventure is the greatest in terms of nostalgia and iconic characters, but Tamers hits it out of the park in every category. It has such fantastic drama that is never dumbed down by the writing, and all of its characters are fleshed out and well-developed.

I’m trying to think of any negatives. Okay, the comic relief characters Kazu and Kenta can be a little annoying, and maybe at times the more frightening stuff can be, well, terrifying. But beyond that I can’t think of any complaints. The most compelling character is Impmon/Beelzemon, who goes from petty villain to outright monster to anti-hero throughout the series and the most badass Digimon ever. The relationships between Takato, Henry, Rika, and their respective Digimon are well-developed, charming, and lovable. Guilmon and Terriermon are two of my favourite characters in the franchise, and I even find Yamaki cool. He’s like Noah Bennet off Heroes minus the indestructible daughter.

Digimon Tamers is a very wonderful anime and so far, the best that the franchise has to offer. Next time on DigiMonth, we take a look at what is the most controversial season of the franchise, Digimon Frontier.