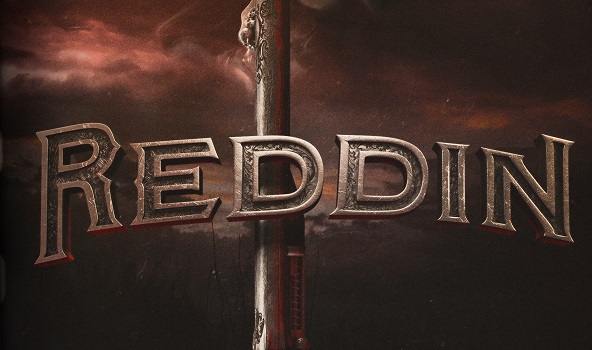 We had the chance to speak with Christopher Baker, writer and founding member of Dead Canary Comics, about upcoming standalone project Reddin. Currently on Kickstarter, Reddin is a western-slash-supernatural merger that is well worth your time. Read below to get a bit more of an insight into this great-looking project;

A Place to Hang Your Cape: So, to start us off, can you tell me a bit about Reddin and what your main inspirations are?

Christopher Baker: Matt Fitch and myself have been collaborating on short stories and comics since we started Dead Canary three years ago. Reddin was Matt’s baby form way back. It never had that name and it was a different story really. Matt is a western buff and really wanted to create a tragic friendship tale, something dark with a melancholy wife. When we began the process of turning the idea into a script it was a very long and self indulgent tale. Matt applied his red pen super power almost a year later and what you see now is the fruit of his tireless labour. We were both very much inspired by the modern western, I’m a Deadwood fan-boy so the word ‘cocksucker’ features heavily.

AP2HYC: It has been said recently that the Western is now a somewhat outdated genre, what made you want to set your story in the old west?

Christopher Baker: Whoever said that clearly hasn’t enjoyed watching Tombstone on a Saturday night! But yes you are right, the western has been in decline of late, I guess at the stage we are at we write what we want to read and the western is still a heavy hitter in our camp. We just hope that something original has been born with the ‘Lovecraft’ style outer detention creature.

AP2HYC: Reddin is a Western tale, fused with Supernatural elements. What made you want to combine these two genres, and how have you made them work together?

Christopher Baker: I guess that’s me and my weird ideas seeping in to Matt’s buddy book. We first had the idea that there was a magic gun, a macguffin of sorts. But getting to the heart of things we opted for a spectral creature from an unexplained timeless space-less zone. We really wanted to show that even creatures from other dimensions want to find a little space out west to call their own.

AP2HYC: What has been the most challenging aspect of the creation of Reddin?

Christopher Baker: Our biggest challenge was finding the right artist. We looked at so many and ran in to loads of trouble settling but then we came across the talented Conor Boyle who really got it. Conor instantly understood the monster, the mood and our desire for a timely delivery.

AP2HYC: Finally, what made you want to do a stand alone story, as it seems these days everyone is after making a franchise?

Christopher Baker: We have been there and it only frustrates our fans. From here on in Dead Canary Comics will be making stand alone stories to entertain and enjoy without the pain of a cliffhanger, this isn’t to say there wont be sequels or prequels, in fact I’m happy to tell you that a London based accompanying story will be in production soon. Reddin will rise again!

To see more of this exciting tale, and to support the Kickstarter campaign you can visit here.