Home » REVIEW: It’s Hard to Be a Girl 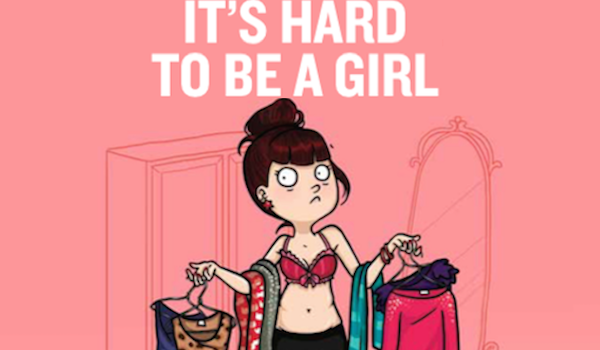 Written as a compilation of short stories, It’s Hard to Be a Girl follows central character Estelle as she experiences the daily things that make the stereotypical woman’s life difficult. With 120+ pages of shorts and snippets of Estelle’s life, the graphic novel does a decent job at providing readers with the opportunity to get as much out of the book as a whole. Rather than a single plot that would likely force readers to retrace and reread, It’s Hard to Be a Girl gives condensed mini-stories that can each be read in half a minute. There’s an editorial feel to the book that makes each mini story seem like a Sunday morning cartoon in the New York Times: short and to the point.

While there is a slight overarching plot that connects the four chapters, and subsequently the sub-stories within said chapters, for the most part, the sections of It’s Hard to Be a Girl can be read individually without needing to have read the others, something that makes it a far easier read than some of the more long-winded graphic novels that focus on a singular plot from start to finish. The broken quality of Bach’s novel means that it doesn’t need to be read in one sitting, it doesn’t require an overabundance of concentration, and it isn’t something that will become tedious to the point where you need to put it away. It’s a cute read that doesn’t take itself too seriously, meaning that there’s little pressure where reading it is concerned.

Stylistically, It’s Hard to Be a Girl is an interesting comic that uses a minimal amount of color in each of the stories. Humorously, the only two colors that make an appearance in the majority of the book are pink and blue – a clear nod to the differing genders and the colors often associated with each. The short stories switch between blue and pink, making color serve more as an indicator of a shift in topic than anything else. Seeing as the colors are only actually utilized in the background of the comic panels, it’s evident that they’re meant to be more of a visual clue to the change of story than any sort of significant addition to each mini-plot.

My one qualm with this story is the fact that the title isn’t necessarily a reflection of the novel itself. Something along the lines of, “The Life of Estelle,” would have been more appropriate considering the actual title of It’s Hard to Be a Girl is a lofty one that isn’t really backed up by the stories.

The content of the book is where things get trickier to discuss, mainly because it’s hard to tell if this is a satire or an actual depiction of the ways that, “it’s hard to be a girl.” Most of the short stories depict Estelle in a manner that seems to portray her as the standard female typecast of the 21st century. Her struggles come from wet nails, an almost primal need to go shopping, and a significant other that’s just so stereotypically male he can’t figure out why the woman in his life does the things she does.

The issue I have with It’s Hard to Be a Girl is the fact that it is hard to be a girl… just not for the reasons shown in this graphic novel. 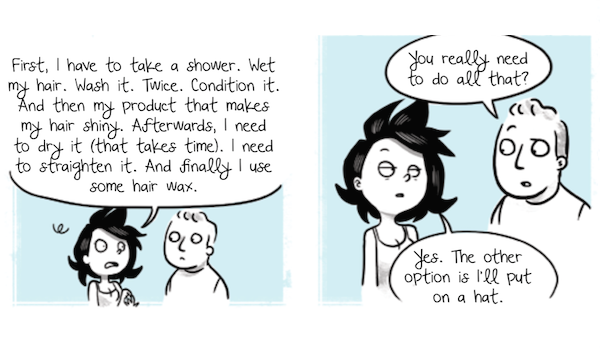 To me, it would have been better, and more proactive, to convey the fact that women make less money than men, are often pigeonholed due to their gender, and are frequently belittled and ridiculed for the very things that are depicted in this comic. The notion that the only struggles women face involve deciding which shoes to bring on vacation and taking such long showers that the water runs cold, is something that is so frequently thought to be true that it only further increases the chasm between the sexes.

Certainly there actually are women like Estelle in the world, who overreact when their boyfriends don’t give the appropriate response to a question as loaded as, “Am I fat?” and refuse to wear anything above a certain dress size, and It’s Hard to Be a Girl does an expert job at depicting them, but the story is a very limited representation of the gender.

Oddly enough, it’s likely men who would get the most enjoyment from this graphic novel. It provides an odd insight into their basic view of women by having the central character serve as an almost caricature of the gender. So often one overhears men joke of women only caring about shopping and looking good, something that is depicted in comic form through It’s Hard to Be a Girl. The lessons sections of the comic, meant as pseudo-tutorials for how to best deal with PMSing women, needy girlfriends, and insecure significant others, are the standard things that men complain about and make fun of in standard TV sitcoms. 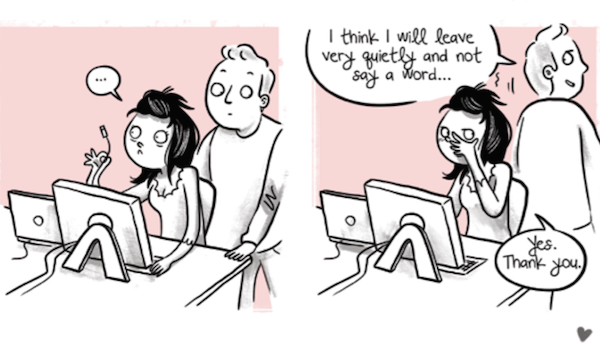 Again, it’s hard to tell how serious this graphic novel actually is in terms of what’s being portrayed. The characters are so stereotypical that at some points it seems as though it’s actually is a dig at society and its perception of women rather than an accurate portrayal of what makes it hard to be a girl.

Basically, if you’re looking for a quick and generally fun read with some humorous moments, It’s Hard to Be a Girl is the graphic novel for you. If you’re actually looking for something that shows how and why it’s hard to be a girl, perhaps this one should be skipped. Like everything else in the world, this comic has pros and cons that will likely differ depending on whomever is reading it.

The only way to find out whether or not it’s for you is to simply read it yourself and make your own opinion.

Have you checked out this comic yet? What did you think? Let us know in the comments or on Twitter.