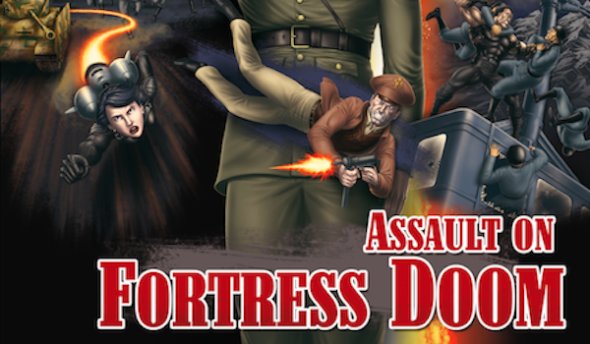 AP2HYC: So the tagline describes it as “The bastard offspring of Star Wars and Where Eagles Dare.” This will surely get people hooked, so can you elaborate on it?

McDonald: On reflection, I’m not sure it was such a good idea name-checking two of the coolest films of all time in a tagline…talk about putting pressure on yourself. But I described the graphic novel like that because it’s a WW2, guys-on-a-mission-to-infiltrate-a-fortress story…but a lot of the set pieces within the story owe a debt to Star Wars. The final battle, the attack of the tie fighters, the infiltration of the Death Star… all have consciously or unconsciously made their way in. Like a lot of people of my generation, the story-telling in Star Wars and its sense of adventure had a big impact on me.

AP2HYC: Can you talk about the style of your artist Edgard Machiavello and how he came to be involved?

McDonald: Ed can actually draw in quite a diverse range of styles, but there were two particular things that drew me to his work. He naturally draws WW2 action in a style that reminds me of some of the work in old British war comics: not too cartoony, but stylised in a way that definitely recalls those older comics. The second thing is that he does great vehicles, possibly as a result of his technical drawing background (he is a trained architect). We met on DeviantArt and within a few emails it was obvious he was the perfect choice for the story.

AP2HYC: How are you capturing the look and feel of the setting?

McDonald: There’s a real attention to period detail and we were careful not to let anything slip through which would be anachronistic. The same goes for the language the characters use and the way they interact with each other. We also use a slightly muted colour palette which I think helps with the WW2 feel and there’s plenty of lovingly recreated wartime vehicles from Spitfires to Panzers.

AP2HYC: Did you do a lot of research into World War 2 prior to writing the book?

McDonald: Although the story is fictional – and has some fantastical elements – it was really important to me to ground it in reality. There was a lot of online fact-checking and I watched the World at War, as well as countless History Channel docs about supposed Alpine redoubts and secret Nazi technology. The British war comic Commando was definitely a visual reference point for us and an obvious source of inspiration is Where Eagles Dare – we even have our own cable-car sequence in the graphic novel!

AP2HYC: Is the book now finished? How did you find the process?

McDonald: Yes, the book is finished bar some background character art we are adding as part of Kickstarter rewards. Making it was everything you would expect: exhilarating, fun, challenging and tiring. Comics allow your imagination a real licence to roam and that freedom is very liberating. This was also our first graphic novel, so I think we both learned quite a lot of things the hard way: one day we will tell the story of our bleed debacle, but for now it remains locked in a government warehouse near the Ark.

AP2HYC: How are you fitting sci-fi elements into the story without straying too far from reality?

McDonald: Great question. The sci-fi elements of the story (largely surrounding secret technology on both sides) are a really important part of the plot: but I never wanted them to overshadow the drama at the heart of the story. I have read plenty of great WW2 yarns, but for me, the minute you have impossibly advanced mecha-suits, or time travel technology, or zombies or magic for that matter, you necessarily lose some of the real drama of WW2 and your story becomes something else. It all gets a bit too knowing and a bit arch and this can undercut a story’s tension. Awesome though Return to Castle Wolfenstein is, for me the story is not as compelling as Where Eagles Dare, The Dirty Dozen or The Great Escape. So the sci-fi elements of Assault on Fortress Doom are based around vaguely plausible secret technology and keep it in the realm of a WW2 adventure story.

AP2HYC: Will fans of war and adventure stories love this book?

McDonald: I hope so! It’s absolutely jam-packed with WW2 history, vehicles and evil Nazis…and in terms of adventure, we’re confident the story of a secret mission to save mankind mere hours before a doomsday device is launched will press people’s buttons. Parts of it will certainly feel familiar to anyone who likes war or adventure stories, but I also think the combination of elements is fairly original.

AP2HYC: Without giving too much away, can you talk about how the central twist will shape the plot?

McDonald: That’s a tough one! All I can say is that not everyone is quite who they appear to be. Dammit, I’ve already said too much.

AP2HYC: As this is a war story, will it be particularly violent or are you going for a more action/adventure approach?

McDonald: There’s quite a high body-count but it’s not particularly gory and the violence has a cartoon quality more in line with action/adventure stories. That’s not to say that it’s frivolous or disrespectful to the reality of war – I certainly don’t think anyone who’s reads the last 20 pages of the story will think we are trivialising the horror or sacrifice of battle in any way.

Have you contributed to this Kickstarter yet? Let us know in the comments section below or send us a Tweet!