Home » FRANKSGIVING: From Page to Film: Miller’s Comics as Movies 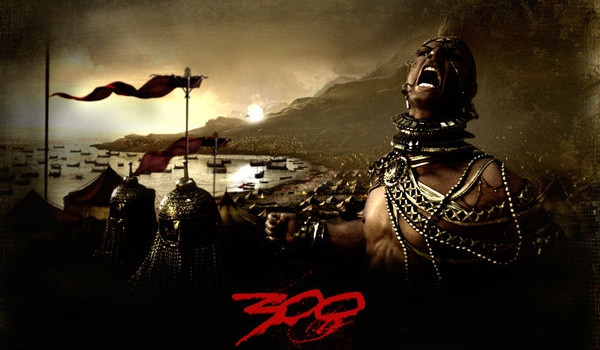 As it’s the Thanksgiving season, we at A Place to Hang Your Cape are celebrating it with a special Franksgiving, looking at all the brilliance Frank Miller has given us over the years. I am going to be translating how his work in all those comics, has corresponded into films we’ve seen today. Frank Miller is perhaps best known for his dark comic books such as Sin City, 300 and The Dark Knight Returns, yet his repertoire exceeds beyond his popular graphic novels which has resulted in his work to be gracefully transferred to the big screen.

Now one of the most action packed spectacles to be transferred from comic to film is 300 and alone, the film is a work of art; from the cinematography to the special effects, when watching this film, it feels as if you are watching a live action comic. Before I start though, there are some opposing aspects between the comic and the film. Firstly, The Queen in the movie was seen as a lead character who played a pivotal role in saving Sparta, however in the comic the character was almost non-existent, only to be seen in the beginning of the series but not after that. Leonidas’ son wasn’t even featured in the comic at all which is also the same for Theron.

The rest of the differences were aspects of certain character appearances and personal traits such as The Immortals and Xerxes Men. However you see within the film the clear similarities of the graphic novel and to be honest, they are very accurately done, the scenes are literally taken from the novel and pasted on to the screen which I stated at the beginning of this paragraph; its as if your watching a comic come to life. Which works very well for a media’s point of view as it gives the viewers a more abstracted presentation of the action being shown on screen, which what I believe makes the film rather entertaining to watch. The dialogue in the film is near identical to the comic, its as if the actors used the comic book as a script for the film and for people who are true 300 fans, are able to feel a bit of recognition from the comics as it will feel true and honest when watching the film. I hear so many times, people going “well that didn’t happen in the comics”, but having the dialogue duplicated from the novel it therefore allows the viewers whom enjoyed reading it see the words come alive throughout the film.

This being said, 300 shows a good of example of how Miller’s graphical work has been almost perfectly replicated into a live action film; however what has been captured quite expertly from page to screen is the dark and absurd nature that is contained in his graphical work. Daredevil was considered a struggling and unpopular comic but once Denny O’Neil arrived on the scene, it allowed Miller to revolutionised the character and its surroundings. He created a darker emphasis to the story , which gave it a more authentic feel and after issue #168 sales started to rocket up.

The same can be similarly reflected towards the screen adaptations of the film. The original film was considered a write off, but the Netflix series of Daredevil brought the popularity back for the character which the film failed to create. The reason why the series was considered to be so popular I believe, is due to the dark and gritty essence that Miller created in the comics. I am using this world ‘authentic’ again because it really summarises the series in a whole, It wasn’t like another adaptation failing to capture all the key concepts within the core of the comics. The series was dark, it’s character development was exceptional (especially Wilson Fisk) which allowed the first season to flow comfortably. The reason for this? It’s because the series managed to capture what Miller was creating in the comics, it didn’t feel like a standard super hero series, it had a very noir like darkness to it, which is what Daredevil is all about. 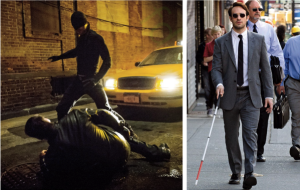 The same aspects are connected within Sin City, which is a very dark and tragic story; and again, the reason why? Well Miller directed the movie himself and you see the artistic creativity that is presented in his graphic novels. Like 300 the film is a work of art, all the colours in each shot, the comic like cinematics and character development is a true refection on his work in the comics. Regarding the idea of character development, Miller’s work in The Dark Knight Returns could easily be adopted in The Dark Knight Rises. The details of the comic will obviously have no chance of making it into the film, yet you see a very similar Batman in both film and comic. In The Dark Knight Returns you see a glimpse of an older, jaded Bruce Wayne, who had given up in life and chose no longer to fight war on crime and instead resigned himself into a simple, alcohol infused pit. Things changed however when a spark within him appeared and he was out in the night, becoming the needed saviour once again.

These aspects of Batman are twinned with the character in the movie, Bruce Wayne has become deluded from the events of the previous film, from the radical and psychotic doings of the Joker and Harvey Dent, he starts to doubt himself as Batman and has a sensation of keeping a low profile, its not till his fellow peers and a bit of self determination, does he bring himself back from his dwelling solitude to conquer the antagonist. So it may not be similar word from word but the feelings and concepts of Batman match each other from Miller’s comic and Christopher Nolan’s film, its as if Nolan was considering the comic whilst he developed Batman in the concluded film of the trilogy.

So after going through certain comics Miller has been involved in, whether its adapting the story straight onto screen or seeing the themes and certain ideas being leaked in the characters and narrative, you clearly see Millers works in these films, which has made them so artistic and exciting to watch, whether you agree or disagree, there’s no denying that Miller has inspired the artistry we see in these films today. Send a tweet or leave a comment if you have more films that contains Millers graphic working composed in them, or even if you want to add to what I have said, happy Franksgiving.

Do you think Miller’s work translates well from comics to films? Let us know in the comments section or send us a Tweet!