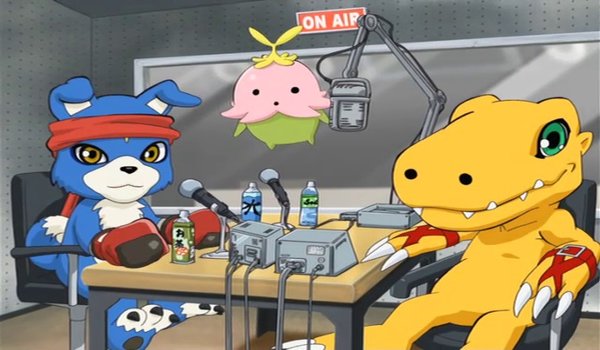 It took four years for the Digimon franchise to recover from the poor reception that the fourth season Digimon Frontier. Though there was the independent computer-animated movie Digimon X-Evolution, which we might review at a later date. The fifth season Digimon Data Squad was released in 2006, and boy, what a breath of fresh air it was. Each season has brought something new to the table, be it good or bad, and the key distinctions for Data Squad was its alternate art style, a cast of older characters, and a gimmick of the humans punching Digimon in the face. The season pays homage to the past seasons but tells its own story, and being aimed at a family rather than children makes it a little more mature in its storytelling and humour.

After Digimon Tamers, Data Squad has what could be described as a realistic plot. Overseeing the show’s story development was Jeff Nimoy, who was co-director of the first two seasons. To the stoy: Digimon who appear on Earth are monitored and captured by DATS (Digital Accident Tactics Squad), a secret government organization who act as cops/custom officers with Digimon, and each agent is partnered with a tamed Digimon. The newest recruit is Marcus Daimon (Quinton Flynn), a fiery street brawler who becomes friends with Agumon (Brian Beacock) who becomes Marcus’ brother-in-arms after he fairly loses to the punk. Marcus and Agumon are accompanied by prodigy Thomas Norstein (Crispin Freeman) and his loyal partner Gaomon (Skip Stellrecht), and veteran agent Yoshino Fujieda (Colleen Villard) and her partner Lalamon (Dorothy Elias-Fahn).

The early episodes are similar to Tamers with random Digimon appearing to cause trouble and the DATS agents fight them and send them home while dealing with their clashing personalities and Marcus’ daily need to fight things. They eventually venture into the Digital World where they discover a Mowgli-like kid named Keenan Crier (Brianne Siddall) who thinks he is a Digimon, and is protected by his friend Falcomon (Steven Blum). We learn Keenan fell through a portal to the Digital World built by his parents, and raised by a friendly Frigimon until a tragic incident led to her death. Digimon, when defeated, return to an egg form, but can be outright deleted in this form. Keenan is the ward of Merukimon (Richard Epcar), a powerful Digimon who rules over a portion of the Digital World.

As the show progresses, both humans and Digimon make more rash decisions in their attempts to oppose each other including potential civil war and extermination. The most notorious character in the show is the cruel scientist Kurata, a real douchebag who just wants to outright destroy Digimon. We later meet the Royal Knights and their master King Yggdrasil, the creator of all Digimon, who is actually an ancient computer program that follows the cliché belief that all humans are dangerous and must be eliminated, leading to a fateful clash of the titans that will decide the destiny of both worlds.

I have to say the strongest aspect of Data Squad is its cast of characters. Most if not all of them are well-developed and their relationships with each other are great. Though I think the weakest amongst the characters has to be Marcus. He is even more stubborn than Davis, believing he has to solve everything with his fists and one too many times does he act really cocky and headstrong. Agumon is great fun, being a mixture of all the past Digimon partners who were teamed with the past Goggleheads. Thomas quickly manages to quickly grow beyond the “smart cool guy” and seeing how many jerks he has in his family is amazing. I wanted to run his grandma’s head over with a tractor. Gaomon doesn’t really grow much but his stiff demeanour provides a lot of humour. I particularly like Yoshino but Lalamon is a bit of a bore as a partner.

Keenan, who later becomes a main character, is the best out of them all. He’s only about ten but has been through more trauma then have the cast of Eastenders. The supporting cast are very likable, particularly DATS Commander Sampson, and Homer Yoshima, who appears as a wise old fisherman but has a larger role in the series with his partner Kamemon. Marcus’ sister Kristy gains a partner-of-sorts in the form of Biyomon, though he has sporadic appearances due to the nature of the show. I like the villains aside from Kurata, as most of them are more complex or have good intentions. But Kurata. What a scumbag. The only villain out of the whole Digimon franchise I truly dispise.

The production quality of the season is different from the others, swapping the usual animation style for something you might see in Bleach or Naruto. The cast are much older than children of the past seasons, and the Digimon themselves are much more larger in size, possibly to show off the fact they are monsters and are dangerous. The season has a lot of heavy-hitting moments, particularly when related to Keenan who was raised by a kindly Frigimon until she is tragically deleted by Kurata and his mindless drones called the Gizmon. He has to deal with an identity crisis, a being without a home, parents he never properly knew, and trying to find his place in the world. I’ve always admired Digimon for its complex characters, and Keenan is one of its best.

Censorship has never really had a presence in the shows, but Digimon Data Squad had one notable inclusion, ironically related to the same Digimon that got censored in Digimon Adventure. In Adventure, a Digimon named Nanimon was partially censored for drinking alcohol, instead getting rewritten to get tipsy on cola. An alternate version of the character, BomberNanimon appears in Data Squad to wreak havoc. However, because this show was released during the years after 9/11, BomberNanimon was reimagined into the more harmless-looking Citramon who threatened to kill everyone with fruit juice. Now I could say this was a dumb decision but I think it is an appropriate and creative one. Beyond that, the show has no issue massacring Digimon headed by a psychotic badguy who supports genocide.

Digimon Data Squad is a fun, exciting, and very well-written show and a welcome return to form for the Digimon franchise. A lot of familiar voice actors returned for this season and I praise Jeff Nimoy for bringing such a fantastic English dub to life. Next time on DigiMonth is the sixth and most recent season Digimon Fusion. However, Fusion is actually split into three parts, with the third part being a sequel series akin to Digimon Adventure 02. I’ll review the full first season of Fusion and the follow-up sequel The Boy Hunters Who Leapt Through Time in another article.

What are your thoughts on this season of Digimon? Does it improve from Digimon Frontier or is it mediocre? Sound off in the comments below or leave a message on our Twitter feed.