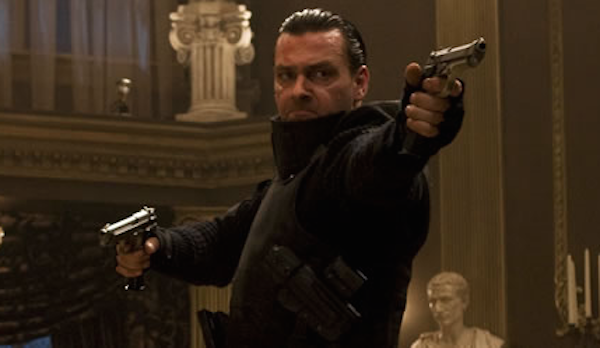 If you’ve never seen Punisher: War Zone, then you’re missing out on the aforementioned excellently cheesy moments, as well as a few more scenes that seem like they’re ripped straight out of the pages of a Punisher comic book. A lot of people hated this film, and I completely understand why. It was goofy as hell, it had pretty crappy acting, and it was just a mess in regards to character and plot development. But it wasn’t terrible. I’d consider it a fun popcorn flick on-par with the Transformers movies. It has its moments, both good and bad, but I honestly think that it captures a solid portrayal of the Punisher. (spoilers ahead!)

For those of you who are unaware of the Punisher’s origin story, it goes like this: Frank Castle’s wife and kids are gunned down in the crossfire of a mob gunfight in Central Park. Driven into a deep depression and rage, Castle, a veteran soldier and certified bad-ass, launches a one-man war against the scum of the city. Rapists, murderers, pedophiles, and the like are unsafe against Castle’s wrath as he uses a lethal arsenal of weapons to cleanse the streets. But he’s not doing this out of revenge; he’s doing it out of punishment.

Punisher: War Zone starts off with a seasoned, experienced Punisher who has been doing his vigilante thing for a few years. This means we don’t have to go through a lengthy, often tedious origin story (which most comic book movies seem to suffer through). Although the 2004 film The Punisher did the origin pretty well, it was still nice of this movie to avoid the build-up and to throw us right into the action.

Ray Stevenson is a great Punisher. He’s got the build, the attitude, the mannerisms, etc. And it certainly helps that he looks almost exactly like the Punisher himself. Thomas Jane was a great Frank Castle, but Stevenson was the Punisher. It’s kinda like how people say Tobey Maguire was Peter Parker while Andrew Garfield was Spider-Man (even though I personally thought that Garfield sucked as both personas, but that’s for another discussion).

The one thing that Stevenson’s Punisher did much, much, much better than Jane’s Punisher was the ferocity. In 2004’s The Punisher, Jane was fairly violent. He shoved a knife through a guy’s mouth, he shot a blade into another guy’s jugular, and he essentially decimated the city’s organized crime scene. Despite all this, I still think Jane was too nice. Yeah, “nice” and the Punisher don’t exactly go well in the same sentence. But it’s true when discussing Jane’s version of the Punisher. There were numerous times when the character, had he been more faithful to his comic adaptations, would’ve carried out some pretty heinous deeds. Instead, his actions are toned down significantly.

In Punisher: War Zone, we get the brutality full force. There’s one scene where a mobster surrenders and lets himself get handcuffed by the police. The Punisher shoots the guy point-blank in the face with a shotgun. No mercy. THAT’S the Punisher. He doesn’t mess around.

But there are other characters to look at in this movie; unfortunately, none of them are too pretty (both looks-wise and acting-wise). Like I said, the acting is pretty poor throughout, especially with the villain Jigsaw and his brother Loony Bin Jim (an original character invented purely for the movie). Seriously, could they have picked any worse people to play these roles? I apologize if I offend anyone, but Dominic West (Jigsaw) and Doug Hutchinson (LBJ) should be kept far away from films (but then again, this was seven years ago, so their acting could’ve improved). They sounded like high-schoolers auditioning for a school play. All the lines came out clunky and over-acted, and half of the stuff they said barely made any sense. Don’t get me started on how stupid it was that they had to invent the character of LBJ for almost no reason. The only good thing about Jigsaw was his look. The make-up was really well done, and Jigsaw actually looked intimidating in this movie. It’s just a shame that the actor had to butcher the role. 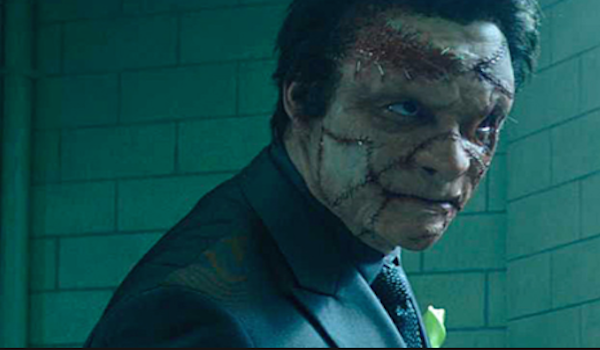 I’m lukewarm about this film’s version of Microchip, the hacker-sidekick-confidant of the Punisher. The 2004 film didn’t even include this character, so I have to appreciate Punisher: War Zone for going the extra mile to add Micro. However, I find the casting choice of Wayne Knight to be very questionable. I’m so used to seeing him do slapstick roles in films like Jurassic Park and Space Jam and shows like Seinfeld, that it’s really odd to picture him in a more serious genre. Hey, at least he tried. It’s not easy to break out of a type-casted character. Knight obviously attempts his best to present the character, but I just don’t find myself too impressed with the portrayal.

The plot is, well, a plot. The Punisher is responsible for Jigsaw’s disfigurement, so Jigs establishes a personal vendetta against him. Jigs busts his brother LBJ out of an insane asylum and works with him to create an army that could overthrow the city’s police and the Punisher. That’s about as bare-bones as you can get with the plot. Along the way, you learn more about a particular sub-plot involving an undercover cop who Frank accidentally killed because he thought he was one of Jigsaw’s henchman. There are a couple of other minor sub-plots thrown about the film involving Micro’s catatonic mother and an ex-druggee cop who acts as the Tom to the Punisher’s Jerry, but you hardly care about what’s going on with such bland characters. You just want to see what the Punisher is doing at all times.

The film culminates with the Punisher fighting his way through a gang-infested building, shooting everything with two legs and a heartbeat, before confronting LBJ for an entertaining fight scene. It’s nowhere near as good as the fight between the Punisher and the Russian in the 2004 film, but it’s passable. Throughout the fight, LBJ taunts Frank, telling him in detail about the injuries he’s causing on his body. Frank gains the upper hand and comes out on top, but LBJ gets away and lures the Punisher into a trap.

In one corner, LBJ has a gun pointed to the head of the daughter of the cop who Frank accidentally killed earlier on in the movie. In the other corner, Jigsaw has his gun aimed at Micro’s head. Jigs loads a gun with one bullet and tosses it to Frank, making him choose. In a last-ditch-effort, Frank instead shoots LBJ, causing Jigsaw to execute Micro. A one-sided fist-fight breaks out between the hero and the villain, and the Punisher wins by skewering Jigsaw and throwing him onto a fire.

The ending is bleak as hell, seeing as Micro was killed, but that’s the purpose of a Punisher story. It’s meant to be dark. There are no winners. You can’t expect a happy ending where Frank and Micro go to a restaurant and eat shawarma. The reality is that people die in a war, and for Frank Castle, this war is far from over.

Take Punisher: War Zone at face value. I don’t think they were trying to go for something very deep with this film. Like I said in the beginning, it’s a popcorn flick. If you want something mindless for two hours but ALSO want a decent look at who the Punisher is and what he stands for, then check out this movie.

What were your thoughts on Punisher: War Zone? Was it an absolute stinker or does it deserve some credit? Tell us what you think in the comments or on Twitter!