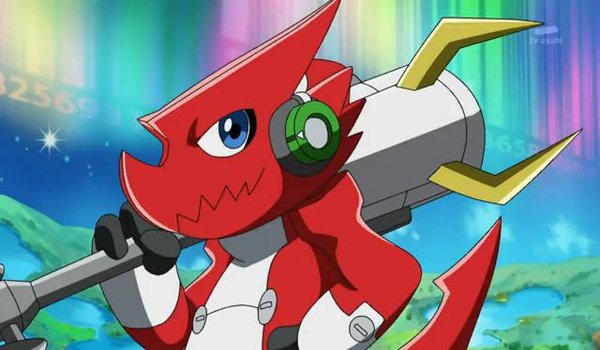 A key element of the Digimon franchise is the concept of Digivolving, allowing Digimon to evolve back and forth into stronger forms through various means, usually through the Digivices owned by the various characters in the anime. But each season has done something different with digivolving or introduced weird gimmicks – first it was basic “grow bigger and stronger”, then DNA Digivolving fused two Digimon together, then humans fused with Digimon, then the humans became the Digimon. Now, Digimon Fusion (Xros Wars in the Japanese version) has completely thrown the rules out the window. Now, Digimon simply fuse together like they are Goku and Vegeta.

The sixth season, Digimon Fusion, has a very similar tone to Digimon Adventure with a dash of Frontier thrown in. However, the season also feels a lot like a video game being played out in animation – no, not like Sword Art Online, but more like an animated RPG/Platformer game. Our hero is Mikey Kudo, an energetic kid, good samaritan, and gogglehead number six. He will do whatever needs to be done to help out a friend in need, much to the frustrations of his friends Angie Hinomoto and Jeremy Tsurugi. Mikey encounters the wounded Shoutmon, an eccentric loudmouthed Digimon who wishes to become King of the Digital World. Upon receiving his Digivice, Mikey, along with Angie and Jeremy are sucked through a portal to the Digital World, which is split into different zones that need to be accessed via portals.

The children learn the Digital World is at war, under siege by the Bagra Army led by the evil Lord Bagramon, who is stealing the Code Crowns of each zone, which will let him gain complete control over the world. To combat the army, Mikey and Shoutmon form their own army called the Fusion Fighters, which grows to a large size when they recruit more and more Digimon. Amongst them are Shoutmon’s friend Ballistamon, a comical robotic beetle, Elvis-voiced Starmon, lone wolf Dorulumon, and his sidekick Cutemon. The Fusion Fighters learn that they aren’t alone – there is Team Blue Flare led by Christopher Aonuma, who is essentially a blonde Sasuke Uchiha, and Team Midnight led by Nene Amano, a quiet mysterious girl who is in the service of the evil charismatic AxeKnightmon. Nene’s younger brother Ewan is also in the Digital World, believed to be a prisoner, but later becomes a key player in the second half of the season. Yeah, there are a lot of characters here.

The season is a lot like a video game, with the various characters moving to different places, collecting items, and recruiting new party members. Digimon don’t digivolve normally, instead “Digi-Fusing” as mentioned before into new forms like they are Zords from Power Rangers. Halfway into the season, they introduce normal digivolving, but only Shoutmon and Christopher’s partner Greymon can do it. Seems a little pointless.

Because the cast is so big, only the main characters really get proper development with the occasional focus on a side character. Mikey and Shoutmon stand out the most for their chronic hero syndromes and their great partnership. Angie and Jeremy are great fun and develop naturally, but are sadly shooed-out before the second, darker half of the show. Christopher is a standard grumpy anti-hero and rival to Mikey, and Nene probably came out as my favourite character, a good person willing to do bad deeds to save a loved one. Ewan is essentially a rehash of Ken Ichijoji from the second season, only slightly younger and more naïve. The rest of the bad guys don’t evolve much, but are at least fun. I particularly enjoyed the anti-villains Olegmon and Apollomon introduced in the second half of the season.

Mikey is my favourite character in the series, but truth be told, he doesn’t really grow much as a character or have much going for him. He’s a selfless good samaritan who is always on the side of virtue, never compromises his beliefs, or does anything in the area of grey morality. His one flaw is that he will always help others even if the odds are impossible, but it is depicted as a good thing rather than a weakness. At least the other characters have flaws that are played upon – Shoutmon is egotistical, Angie is homesick and emotional, Jeremy is a proud buffoon, Nene doesn’t listen to her heart, and Christopher thinks he has to be strong through power.

Digimon Fusion has a lovely, bright, shiny animation style with memorable music, and the series never gives you a reason to feel bored. At times during the second half of the season, the animation took on a very different style, changing from the traditional style used in Digimon to a more sharper, pointed design that looks a little jarring. It has big, exciting action sequences nearly every episode, though it does slow down to deal with character growth and relationships, particularly during the second half.

However, it is not without its negatives. For one, there are way too many characters in the Fusion Fighters. I understand it is an army, but beyond the key characters, most are unnecessary, and they contribute little to the show’s story. The plot itself is very repetitive, with the armies going to different areas of the Digital World to obtain the Code Crown and defeat the bad guys. The story gets slightly interesting in the second half, which replicates the Dark Masters arc from Digimon Adventure, and the characters go through some varying degree of story arcs.

In conclusion, Digimon Fusion is a welcome return to form for the franchise with a couple of flaws, but is overall good, clean fun. If I had to choose my favourite moment, it is in the 30th episode when Shoutmon fights a giant-sized Tactimon in the middle of Tokyo, and then digivolves into OmegaShoutmon in epic fashion and obliterates Tactimon. Yes, the fusion-based digivolving is cheesy and weird, but they are also pretty cool at times when the combinations make sense. Next time, we tackle the final season of Digimon, which is technically the third season of Fusion, but we’ll examine it as a season like Adventure 02.

Do you like Digimon Fusion? What are your thoughts on the different styles of digivolving Should they have just stuck with the simple version? Sound off below or on our Twitter feed.