Home » REVIEW: One Punch Man by ONE 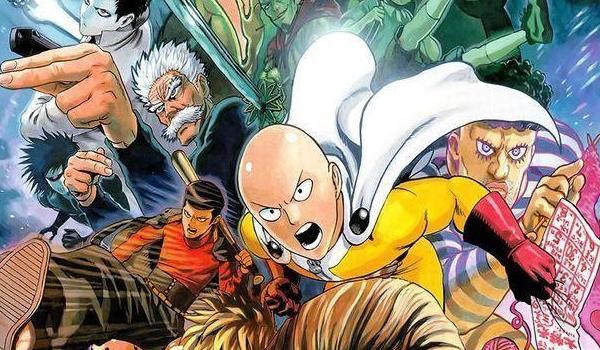 At first glance, a manga is inherently similar to a casual comic, but there is one major difference you have to get used to, the pages are to be read right to left. Which at times made me feel like I was skipping a book to the end and spoiling the story, but you get used to it a after a while. Strangely enough, in the case of One Punch Man, it actually began its life as a webcomic, merely as a hobby project by the mysterious individual under the pseudonym ONE, first released in 2009. Whilst his drawing style was crude and simplistic at best, he showed a true passion to the cause, delivering a great blend of humour and  in depth storytelling with a unique, relatable character. Yet for reference and to keep this review to the point, this series didn’t gain the large fan base it has now until the digital remake by Yasuke Murata featured in the Shueisha Young Jump webcomics in 2012 and the recent release of the anime adaptation, which we’ll cover in due time…

Our story centres on the adventures of Saitama, a young man depressed with his boring and unemployed life until he is forced to defend a young boy from a giant crab-man (trust me, the characters in this series gets weirder from here) upon which he makes a vow to defeat those that threaten his city with a single punch and fulfill his childhood dream of becoming a superhero, which let’s face it, we’ve all had this wish. We pick up three years later as he trained to a superhuman feat of physical strength through a strict training regime (I won’t disclose his training plan here, find that out for yourself), with one defining side effect, he lost all his hair…

It does sound like the artist has a thing against bald people but he uses this defining feature to contribute to the character design, which is amazing to see on both the heroes and villains. Whilst the support cast feature intricate and detailed costume designs and features, Saitama himself is left purposely plain in his design for the sake of underestimation and prejudice. He isn’t what you picture as a hero and the monsters he encounters simultaneously don’t see him as much of a threat, just a guy in way over his head. It gives a strong underdog atmosphere and all the more spectacular when the fight is over (or in most cases, just begin).

I see this design idea highly relatable to the Kick-Ass series as it resembles something a person on a budget would create or order over the internet. This too is reflected in the hero’s association with the class rankings that Saitama must rise through, battling both powerful monsters as well as the heroes that see him only as an imposter. Each follow a certain style to help differentiate themselves from the competition. C class feature heavily makeshift costumes and low budget designs as they mostly consist of guys who have read one too many comic books. B class act like a mafia syndicate in business suits, with the top of class B pulling the strings. Class A and class S let their popularity do the talking as their designs are more detailed and extravagant to reflect their abilities and hero names which have to be earned and assigned through the hero association. Just to put this idea into perspective, if you saw this guy, would you feel intimidated? 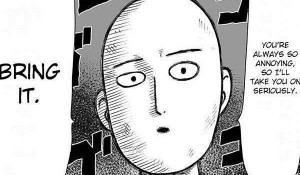 In terms of the art design, Murata does great credit to the source material and even pays homage to ONE‘s style with Saitama’s neutral facial expressions to reflect his bored attitude to the situation (but watch the change when he gets “serious”). Murata takes the time to ensure every detail from the setting to the costumes is clear and consistent across all instalments, and it’s a great reading experience. A notable feature that is greatly used is the method of blurring points of interest and areas of impact in select frames. He uses this technique in order to create a sense of momentum and force, as well as to insinuate the true force that goes into Saitama’s punches, which as you will soon see, definitely pack a wallop. During these scenes I felt like I was viewing the storyboard for the anime rather than the manga, but that just means it’ll transfer well between the mediums. Right?

Having been someone who grew up on the comic book style of the western market, One Punch Man offers a unique yet familiar feel in its narrative. If you were ever interested in seeing how the east influences our favourite media genre, then this series is a great starting point. The action is frantic, the art is beautiful and the story is easy to digest and pick up. It offers a unique perspective that I often think about when discussing the heroes and villains that populate our favourite stories; would having overwhelming power eventually become boring? Glad to see I’m not the only one who thinks that, because this manga presents this concept perfectly. A must read.

By the way, there’s nothing really stopping you from giving it a try. It’s an online webcomic, it’s free. (But if you like it, don’t forget to support the series).

Do you think One Punch Man is a knockout read? Sound off in the comments or send us your thoughts on Twitter!