Home » Star Wars: A Look at the Saga So Far 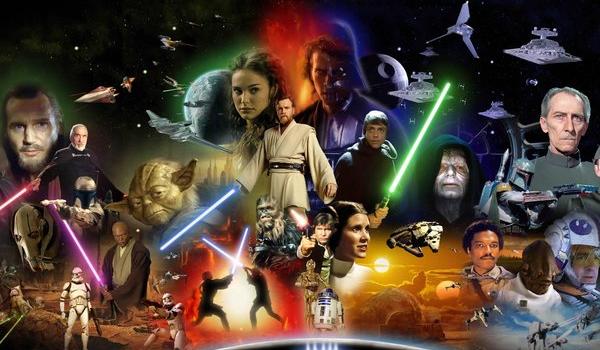 It’s been 38 years since we were introduced to a galaxy far, far away.

In 1977, the world was taken by storm by a universe of possibilities- possibilities we could never have imagined. George Lucas set out to create the “biggest possible adventure fantasy” and proceeded expectations in a damn big way. A New Hope set the bar for science-fiction movies in every possible way.

Sure, there were great sci-fi movies before Star Wars came to screens; from 1927’s pioneering work, Metropolis to the alien invasion of 1951’s The Day the Earth Stood Still to Planet of the Apes in 1968 and we can’t forget the other huge sci-fi franchise of Star Trek over a decade prior. None of these, however, quite had the scale and immersion of the world that George Lucas had created. It was more ambitious and innovative than anything people had ever seen before. The story wasn’t overly sci-fi and played out a bit more like a sophisticated soap opera in an unusual environment, with characters more relatable than past movies of the genre; The curious farm boy Luke Skywalker, the brilliant bad boy Han Solo, the rebel princess Leia Organa. Totally relatable.

The main Story focuses around The Rebel Alliance, led by Princess Leia and its attempt to destroy the Galactic Empire’s space station, the Death Star, led by the saga’s main character, Darth Vader. Along the way, the plans disrupt the quiet life of farmhand Luke Skywalker. As the journey goes, we meet a wonderful cast of characters that remain among the most beloved pop culture icons to this day.

Many huge movie sequels fail to live up to the originals, however in 1981, came what many regard as not only the best Star Wars movie, but one of the greatest motion pictures ever made. The Empire Strikes Back had a much stronger and more focused narrative than its predecessor, focussing more on character development and their relationships with each other, taking the story where it needed to go. Needless to mention of course, is that this chapter in the Star Wars saga features the biggest and most shocking plot twist in the history of cinema. Luke’s motivation to pursue Darth Vader was, in part, Luke’s belief that Vader is responsible for the death of his father, former Jedi Knight Anakin Skywalker. Just for nostalgia, it goes something like this:

Darth Vader: Obi Wan never told you what happened to your father.

Darth Vader: No, I am your father.

Followed by that famous “NOOOOOOOO” that Star Wars does oh so well.

Now, I wasn’t born yet when the movie first hit cinemas, but I can just imagine the shocked gasp of the audience, followed by a stunned silence, followed by “WHAAAAAAAAAAAATTTTTTT???!!!?!?!?!” That must’ve been quite something to experience firsthand!

Return of the Jedi saw yet another impressive entry, creating more character arcs and many young teenagers’ first celebrity crush. You all know what I’m referring to. *wink*; Of course, Princess Leia is so much more than that, she has since become somewhat of a feminist icon. She was the leader of the Rebel Alliance plan to overthrow the empire and was, unlike many classic myths where the female is the object of the quest or the hero’s reward, Leia was a strong character who was an active participant in the direction of things.

As much as many fans may want to, we can’t forget about the prequel trilogy. No, they weren’t as good as the original trilogy, much of the writing wasn’t great and some of the acting was just bad. I have mixed feelings on these movies, but nobody can deny that they provided an interesting back story and origin of the ‘leader of the dark side’

I actually quite liked The Phantom Menace. I thought that the acting was decent, the lightsaber duels were great, Darth Maul was just plain badass and the pod races I thought were pretty cool. It also introduced Jar Jar. I honestly don’t have much to say about that. I won’t take into account that I couldn’t at all take Samuel L Jackson seriously as a Jedi. I can’t have been the only one that was expecting him to come out with “JEDI MOTHERF***R, DO YOU SPEAK IT?!” No? Just me?

Attack of the Clones honestly bored me. I didn’t like Hayden Christensen’s acting through most of it, especially against the much stronger performances of Natalie Portman and Ewan McGregor. Hayden Christensen is not a bad actor, but his portrayal of Anakin was just so stiff and lifeless. The love story between Padmé and he; I felt was too dragged out through this movie. Anakin had been gone for however long and the first thing he does is tell everybody how he’s been seeing Padmé in his dreams. A little creepy if you asked me, I wouldn’t use that pick up line.

I think most would agree that Revenge of the Sith is the strongest of the prequels; it’s what we were really all waiting to see. Even though Anakin had a clear reason for joining the Dark Side, I felt that it may have been a little quick for somebody that had dedicated his life up to that point, to being a good guy. Love certainly does conquer all, ey? His descent to becoming the icon that is Darth Vader was still great to see, and the hugely emotional final battle between Anakin and Obi Wan was damn near perfect. Even with some of the completely cringe worthy dialogue and the delivery of some of it; I thought it was a pretty strong entry into the saga.

Now here we are, awaiting the first entry in the third trilogy, less than a week to go and sure to smash box office and attendance records. Bringing back old characters and introducing new ones will bring together old and new fans alike. Everything we’ve seen so far looks promising, the style is nostalgic and the new protagonists Rey and Finn, played by Daisy Ridley and John Boyega, respectively, are already very likeable. There is also a good amount of mystery and intrigue around new antagonist Kylo Ren, and we are still questioning the whereabouts of Luke. J.J Abrams is certainly a good enough director that we have reserved our doubts that most of our expectations will be met. (I don’t think something as huge as this could ever meet ALL expectations) So far, it looks as though Abrams is going in more of an epic action sci-fi direction than previous entries- like what he did with Star Trek. But hey, that worked, so there’s no reason this shouldn’t. AND it has also been revealed that the first spoken word in The Force Awakens is *drum roll*… “THIS”- How exciting!

What do you think? Will The Force Awakens be a return to Star Wars in all of its glory? Let us know in the comments or on Twitter and of course, may the force be with you.