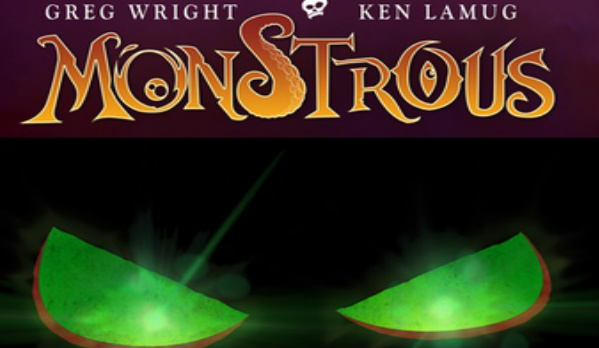 Monsters. Who doesn’t love them, eh? So when we heard about the new comic Monstrous: Tales of Valor and Villainy (Kickstarter) by Greg Wright, we decided to get in touch to learn more.

AP2HYC: What inspired you to create this particular take on the Frankenstein myth?

Wright: I’ve always loved monster stories in general and the Frankenstein idea specifically. One day it struck me: If the secrets of monster-making were discovered by Dr. Frankenstein, that idea would spread all over like new technology. There would be monsters all over Europe! And how would the world change?

The sudden influx of monsters would put them as an automatic underclass and threat to the establishment. They couldn’t get decent jobs, so they’d resort to crime. It would be a vicious cycle, eventually making them fit the label of “monster” they’d been given. The more I thought about it, the cooler the idea taking shape seemed to be.

So Dr. Frankenstein makes robots to regain control and police the monsters, things escalate, and a new order emerges with competing systems of crime and justice. It’s like a steampunk version of The Wire. Everyday townspeople get caught up in it, and there are hybrid figures on the edges: human brains in robot bodies, monsters who try to reform, humans with replacement robot parts. There are so many possibilities!

Or there’s the short answer: I have mad scientists on both sides of my family.

AP2HYC: So, as the Kickstarter video says, “the era of monsters has begun?”

Wright: Ooooooh, yes! The monsters are everywhere. They’re unstoppable. Like any major problem, they won’t just go away. It always struck me that the old monster movies were too final. There’s only one monster, and it’s been defeated once and for all? No way! If there’s one vampire, there have to be a zillion of them. Same thing with mummies, werewolves, zombies. The whole narrative engine of Gothic monster stories seems to suggest global change, but very few stories actually take things that direction…

But we do! Hell yeah, the era of monsters has begun!

AP2HYC: And we’ll be seeing many classic monsters in addition to new creations?

Wright: Definitely! Frankenstein’s monster and Count Dracula both make cameos. Plus, there are zombies, werewolves, and demon spiders. My personal favorite is the six-foot-tall rabbit monster packing a blaster ray gun. I want him as my sidekick when I’m stuck in traffic.

AP2HYC: And they’ll be a strong focus on female characters?

Wright: Yes, I really want Monstrous to be the kind of comic book that helps bring people into reading comics, rather than keeping people out. All four issues have both male and female main characters, and they all stand out in their own ways. I don’t really want to get preachy about it or anything. But I am excited that the hero in the first story is a brassy, sassy little girl who hires the rabbit monster I mentioned to track down her father’s killer. Plus, she winds up saving his life as often as he saves hers. In my opinion, there just aren’t enough comic books like that, which is just one of the reasons Monstrous is special.

I had advance copies of Monstrous at a comic con in November, and a little girl bought a few. She came back the next day just bursting with energy, so excited about the stories. She read them cover to cover and couldn’t wait to tell me how much she loved them! That was a really cool moment for me, to see this book just ignite something within her brain. I love the idea that I could make something that could get her excited about reading and comics and monsters and stories. I hope I can hear about more readers’ experiences like that.

Of course, you don’t have to be a little girl to enjoy Monstrous! Everyone is welcome!

AP2HYC: How many stories will you tell in the volume?

Wright: There are four stories in the first volume, but we have more on the way. There are so many wild and fun directions we could go; the story possibilities are limitless. The main character in all of the tales in the setting, which is defined by monsters and robots. The good guys aren’t all that good. The bad guys aren’t all that bad. All of them are are little monstrous…

AP2HYC: How does the artwork reflect the style and tone of the stories?

Wright: Ken Lamug’s style is just gorgeous. And it’s an integral part of the stories. This world is a dark world for the most part, but there are still bright, colorful spots within it. There’s something in Ken’s artistic DNA that reminds me of Mike Mignola, Tim Burton, and Edward Gorey. It’s dark, but it’s also very inviting.

And on that note, I’d like to invite everyone out there to join us in this dark, funny, weird world. Let’s get MONSTROUS!

Have you contributed to Monstrous yet? Let us know in the comments section or send us a Tweet!