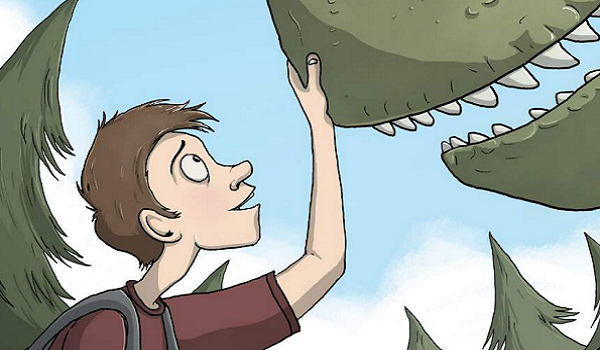 Who didn’t want a pet dinosaur as a kid? It has all the perks: massive size, super strength, and the ability to make that bully’s pitbull seem like a chihuahua. Amy Rowan Moffitt has her character, Benjamin, live out that Kindergarten fantasy in her new graphic novel, The Woods. Told with engaging art and story, it will tug at your heartstrings while making you turn through page after page without even realizing it.

The Woods is the charming tale of a boy and his dinosaur. Benjamin runs across his new ancient reptilian pet when a dinosaur egg jettisons out of the sky. It becomes his task to raise it, nurture it, and protect it. Once it gets too big for his treehouse, he has to take it outside—where the city and the outside world run across it. Things get more and more hectic for Benjamin from there as his dino starts feeding on local deer and gets involved with a mysterious scientific organization—who might know the reason why dinosaurs keep showing up in Benjamin’s town.

Moffitt’s character designs and colors instantly pull you into The Woods’s world. Her minimalist style engages the viewer and draws them in. In particular, her expressions are vivid, emotional, and tug at the right heartstrings. The pivotal scenes in the graphic novel’s third act are excellently rendered, and they give you a real sense of Benjamin’s emotions. Moffitt’s use of shadows adds detailed atmosphere to scenes in the rain and scenes in Benjamin’s room, effectively creating a damp atmosphere through simple dark tones. Each page only has a small number of panels, and that condenses the story’s flow while still providing a solid pace for the reader to absorb each scene. Moffitt even has a penchant for humor, such as when the dinosaur gets too large for the treehouse and shatters it with his size.

The Woods draws the reader in with its charming premise, and it keeps you there with a story that will leave you heart feeling warmed, despite its ending’s slight bitterness. Moffitt’s vivid colors and excellent character designs tell this story in an engaging visual manner that draws you in and makes time fly—it’s one of those graphic novels where you can go through thirty pages without even realizing it. Her excellent sense of pacing and page design create a story that’s smoothly told by a clearly experienced artist.

In this short graphic novel, a good story, and simple, yet captivating art, all merge together to tell a fantastic story. So, if you love dinosaurs and always felt that your dog was a little to small and not menacing enough, pick up The Woods to get your fix of prehistoric gargantuan reptilian adventure.

What did you think of The Woods? Should we invest in time travel and/or cloning to enhance our current pet selection? Or is that too much of a danger, given the tendency for dinosaur cloning to lead to catastrophic events (per Jurassic Park)? Sound off in the comments or send us your thoughts on Twitter!