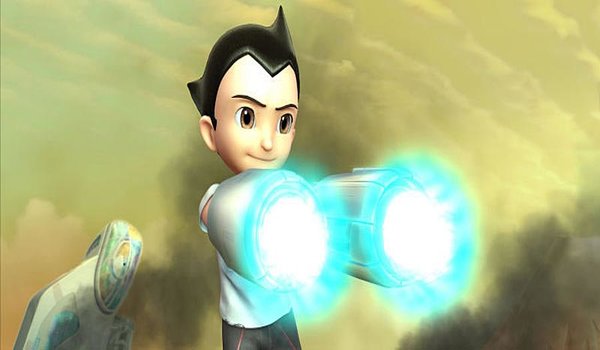 I was exposed to anime from a very young age, and my first vague memories of Japanese animation was a series called Princess Knight, based on the manga by Osamu Tezuka, often known as the Father of Manga. Perhaps Tezuka’s most famous manga is Astro Boy, introduced in 1952 and has become an icon of manga and anime. Essentially a sci-fi take on Pinocchio, Astro Boy mainly followed its titular superhero robot character’s adventures but has themes of family and friendships. Well, Imagi Studios decided to do their own take on the character with their 2009 film Astro Boy, a colourful, funny family film that preserves the talents and charm of Tezuka’s work, and has an all-star cast. So, let’s grab our rocket boots and take a second look at this film.

For a family film, Astro Boy has a very mature, heartwarming story at its centre, as taken and adapted from the manga. In the floating futuristic Metro City, robots and man live together in relative harmony, thanks to the genius of Dr. Tenma (Nicolas Cage). Tenma’s son Toby (Freddie Highmore), is an avid fan of his father’s work but the two have a strained relationship. When Tenma is to demonstrate a new defensive robot called the Peacekeeper to the conformist President Stone (Donald Sutherland), but when its negative energy core causes it to malfunction, it disintegrates Toby. Killing a child is pretty daring for a family film, though it is handled without being too traumatic. Driven by grief, Dr. Tenma constructs an android replica of Toby, complete with his memories, defensive weaponry, and powered by the positive blue core (a counterpart to the Peacekeeper’s red core).

The new Toby quickly discovers his robotic capabilities, able to fly, and is armed with a number of cool gadgets. However, Tenma, believing the robot to be different from his late son when in fact the differences are scarce, ultimately rejects Toby, who flies away and ends up crashlanding on the barren Surface. He adopts the new name of Astro and befriends a group of ragtag kids including Cora (Kristen Bell), who distrusts robots and Metro City citizens alike, though has her own reasons. Astro pretends to be a human to cause any further complications, but soon learns he can’t run away from who he is when President Stone comes looking for him to obtain the blue core.

Package wise, the film has a lot of positive things going for it. The story has a lot of heart to it, with a large likeable cast though one too many characters are purely here for comic relief and add nothing to the plot. Astro’s personal arc to find his own place in the world is good, and the “liar revealed” story trope used actually works well for once, since Astro is in the middle of an identity crisis and reeling from his father’s rejection when he employs it. Nicolas Cage is surprisingly good as Dr. Tenma, who is more of a tragic but psychotic villain in the other versions of Astro Boy that I’ve seen, while here he is a grieving father who makes the wrong decisions.

The animation looks like a mixture of Pixar and DreamWorks, though was done by Imagi Studios, which is sadly defunct. Everything is bright, clean, and has a nice stylish colour palette to it, and very few times does the animation look stiff or, if you’ll pardon the pun, robotic. And the music is just wonderful, beautifully composed by John Ottman. My favourite scene in the movie has to be Astro’s first flight test after falling out a window, disappears off-screen, and then hovers back up with his boots transformed into rocket boosters. The use of the music, which is the film’s theme tune, is just wonderful and the visuals, some of which pay tribute to the 1960s anime, are fantastic. I like the designs of the robots, particularly those Astro encounters in a gladiator ring, and a large robot named Zog (Samuel L. Jackson) reminds me of the Iron Giant meets Baymax.

The all-star cast each give great performances, particularly Nathan Lane who was just born to play the role of Hamegg, a robot repairman who at first serves as a father figure to Astro, but then reveals himself to be the opportunistic showman of the gladiator ring. Bill Nighy plays two characters, the wise Dr. Elefun, and a talking postbox robot named Robotsky, a member of the comic relief trio of the incompetent Robot Revolutionary Front. On the downside, at least character-wise, President Stone is a dull, stereotypical villain. Sutherland is clearly having fun in the role, but Stone’s obstructive warmongering seems to be a rather cheap take that at George W. Bush. He does provide some small laughs and I like it when he is absorbed by the Peacekeeper to serve as the final boss of the movie. Cora also doesn’t really get to do much, and her sad backstory gets resolved in the closing minutes like someone realised it had been set up and needed closure.

I think there is a little too much comic relief going on in the film. Not as much as say in Brave, as every character offers something to the plot and even have their own mini arcs, apart from the revolutionary robots. Voiced by Nighy, Matt Lucas, and the film’s director David Bowers, the trio seeks to liberate robots from human servitude, but because they are both stupid and programmed to obey the three laws of robots, they cannot be taken seriously and it takes them far too long to try and recruit Zog, who is immune to the three laws. If say the film had included the Blue Knight, an anti-hero who wants robot independence through violence, maybe it would’ve made the RRF more interesting as characters and given Astro more depth.

Speaking of which, the film does have a downplayed sense that the perfect relationship between man and machine is not as squeaky clean as it appears. The film opens with a prologue narrated by Charlize Theron (who got top billing despite having only a cameo), sugar-coating Metro City’s “out with the old” routine and mistreatment of robots, while the Surface’s is much more honest and open. Unfortunately, any civil/political subplots between mankind and robots is left out in favour of sticking to Astro’s own arc and President Stone’s boring tirades.

Comparing the film to its source material, it comes out okay. Astro’s design is westernised, making him Caucasian, and removing his more cuter aspects, though his core personality traits remain. Also, he wears a shirt and jacket throughout the film, and only appears in his signature shirtless appearance once or twice. The cast of original characters from the manga is small with only Astro, Dr. Tenma, Dr. Elefun, Hamegg, and Mr. Mustachio appearing in a cameo, while the rest are new characters made for the film. A better villain wouldn’t have hurt like say Atlas (Astro’s anti-hero counterpart) or Pluto (a robot seeking to be the strongest ever). However, I’d say the film honours Osamu Tezuka’s original work, and even slips in a caricature of the famed author through his trademark beret and glasses.

Have you seen Astro Boy and does it live up to the manga and anime? Do you think Osamu Tezuka would’ve been proud? Sound off down below or leave a comment on our Twitter feed.