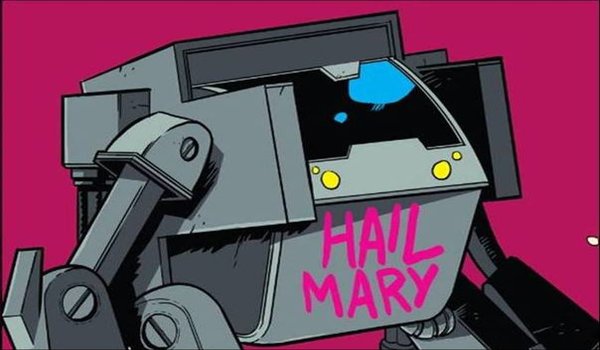 At the end of the second issue of Nick Marino and Daniel Arruda Massa‘s dark comedy/action comic book Holy F*cked, action hero Jesus Christ was taken captive by the vengeful Hercules to kill him. Hercules’ girlfriend Maria and a pregnant Satan rally together the New Apostles, an Avengers-esque team of exaggerated Christian mythological figures, to rescue him. The end of the second issue was pretty exciting and I had hoped the third and fourth would keep up the pace. Fortunately, it does more or less.

Both Holy F*ck and Holy F*cked are creative and clever in their ideas, taking a humoured look at certain aspects of religious culture and society, as well as portraying godly figures as superheroes. This continues into Holy F*cked’s third and fourth issues, focusing mainly on the action and the foreshadowed battle between the New Apostles and Hercules. However, the battle is rather short and one-sided. But then again, it is more than likely going to occur when we get to Avengers: Infinity Wars, so who am I to judge. Hercules is a good villain character-wise, but an immortal god with superhuman strength is a little disappointing as an opponent, making quick work of each of the frankly more intriguing new heroes. Though, I did laugh my head off when he dispatched the Holy Spirit via a fart.

We also have the subplot of Satan’s pregnancy, which is played for laughs, and we have some funny laughs with him freaking out when he goes into labour. Though, we see a rather unpleasant shot of a woman’s private area towards the end of the comics. One thing I have disliked about these comics is the unnecessary use of toilet humour, or at least the private jokes. My first look at the first issue of Holy F*cked came with a splash page showing a fully naked Jesus, which nearly put right off both reading and reviewing this comic book. Aside from that, that’s my only major issue with this whole comic series.

Anyway, with Satan in labour, Jesus captured, and the New Apostles quickly wiped out, it is up to Maria to save the day, arming herself with a giant mecha to battle Hercules. Where did she that from? I won’t give away what happens, but Hercules’ fate is very fitting and the best possible fate worse than death for his character. Production-wise, Holy F*cked keeps up the well-drawn artwork, witty dialogue, and good humour, but still manages to balance the character growth and action relatively well.

In conclusion, the third and fourth issues of Holy F*cked are good, funny conclusions to the second volume of this series that would make the likes of George Carlin laugh out loud. The story seems to be wrapped up by the end of the fourth issue, though the appearance of a certain animal that appears in the closing pages may imply that a character introduced in Holy F*ck may still be crawling around…

Have you read Holy F*cked and its predecessor? What are your thoughts on it? What are the thoughts of Christians or religious followers (but please don’t start any flame wars or religious threats)? Sound off below or leave a comment on our Twitter feed.