Home » What can Deadpool Bring that Other Superhero Films Can’t? 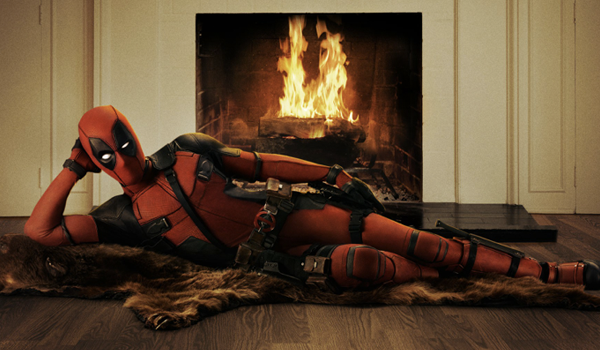 We’ve come to an age where every year we’re to expect a comic book movie to grace our screens and as the sheer amount of these movies continues to increase, some viewers are starting to get bored of these films and find it hard to differentiate one from another. It’s a genre like any other type of film you see, so after a large amount of repetition viewers are slowly going to get fatigued by the same thing, however Deadpool can revitalise the comic movie industry and bring something different than what we are use to. Obviously I am yet to see the film, so I wont exactly know if it will differ from the usual superhero movie or not; but judging on the trailers, research and what I already know of the character, it’s looking like it’s ready to give a new life to the superhero genre.

The thing that Deadpool can bring that others cannot is the raw emotion that consist within this anti-hero, the movie slowly edges its way into a emotionally damaged person, yet this same person still finds the humorous side to all the problems existing in his life, which already brings a new perspective from what we are used to seeing in our archetypical superheroes. To explain further, the difference is that this character is caught in a pit of shame and regret rather then honour and patriotism, so already we see a contrasting effect surfacing in a protagonist that departs himself from the common norm we get in a superhero film.

Deadpool is portrayed as a very egotistical person, who loves putting on a show, which is why he always addresses the audience, making sure he’s putting on a good performance whoever is involved. Now I am not sure whether this will feature massively in the up coming film but there has to be something, even if it is a snippet because this aspect is a big part of the character. He likes to amuse the audience, everything has to be comedic even if he’s in a bad situation, which differs from our usual super hero films. That I know of, there is only one comic film that breaks down the fourth wall (Kick-Ass) but like this film, addressing the audience allows Deadpool to make jokes directly to the viewers, it’s as if he’ll be trying to makes us part of his charades and antics that are going on during the film. However, disregarding the humour, what this also does is create a sense of similarity with himself and the audience because by breaking down the fourth wall, he allows the audience to consciously feel involved, thus creating a sense that this guy in the red suit is just that same as you or me, to some degree, and we’ve never been able to feel something like that in a Marvel movie before so it will be interesting to see whether this actually happens on not.

The humour that is going to consist in this film will differ than any other we’re used to and this is simply because of Deadpool’s don’t give a s$%t attitude, whereas most of the cinematic superhero characters we see, usually all stick to this heroic code; making sure the world is saved and that they’re a role model to all the civilians looking on. However in Deadpool’s case, he really doesn’t care how he is seen by the public, he will massacre people, double cross fellow heroes, do what ever just to stay alive and have a laugh along the way and this is what will create the sour aspect to the comedy, we will know in our mind that certain scenes we find funny shouldn’t be deemed funny, yet will laugh anyway because it’s awkward and inappropriate and that’s what’s going to make this film so special. For example this the sort of humour that is derived in the comics: 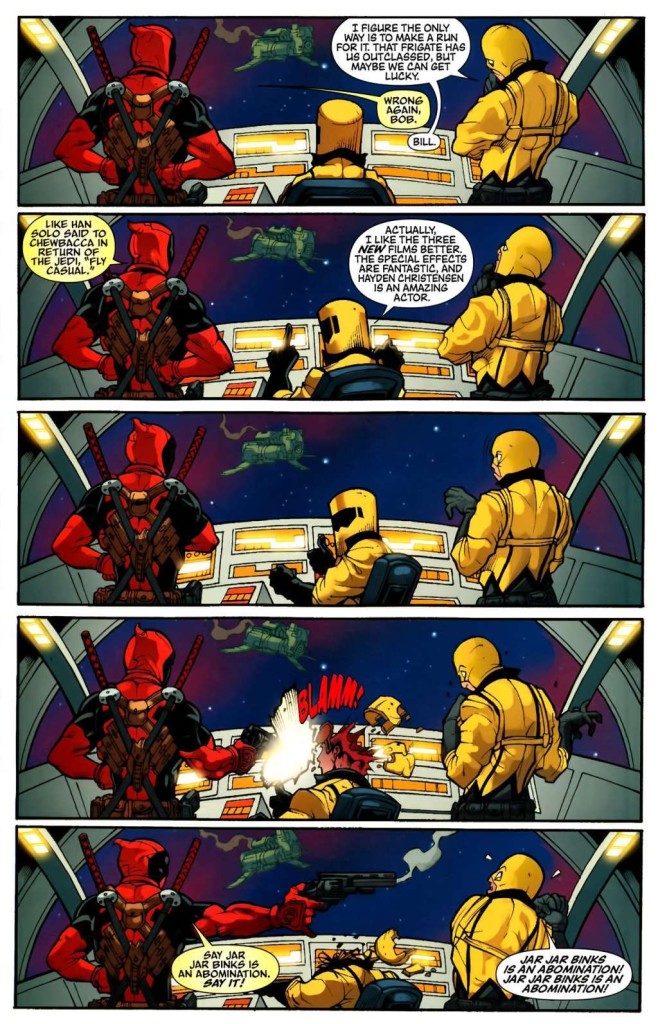 Now if this grotesque humour transfers to the big screen, it will have everyone crying in laughter which we rarely get in other superhero films; name someone out there in the Marvel Cinematic Universe who has the capability of doing something like this?

With the production side, we all know there will be action aplenty in the movie however the trailers show us that there will be more practical stunts rather than lots of visual effects. The only examples of CGI on screen is that of Colossus in his steel form and Deadpool’s expressive mask. This allows the action in the movie to look more authentic which corresponds to the character as its shows the rawness to his ability rather then the super powers that we’ve seen in Avengers Assemble, which sometimes takes the aspect of truth away. But like any project you have to be reasonable about the budget Ryan Reynolds said himself “Deadpool was different because there wasn’t a big budget attached to it.”.

There was not a tremendous responsibility to meet some kind of bottom line. Those kinds of superhero movies when you’re out front, there’s a vast and quite frightening budget attached to them. This one had a super-reasonable budget, and it was subversive and a little bit different, and to me a little refreshing in the comic-book world. But you always have trepidation. When you’re out front, you have trepidation” in regards to what Reynolds is saying by having a reasonable budget allows the film to focus more on the direction and flexibility therefore allowing the film to take more risks and maybe be a bit more spontaneous than the usual comic film we’ve seen.

At the end of the day, the merc with the mouth is going to give us something different resulting in a very unique instalment in the field of superhero movies. From his fourth-wall breaking, to the crude humour or even the outlandish amounts of violence and gore, Deadpool has the ability that could appeal to audiences who have grown bored of the familiar superhero archetypes that are constantly being repeated on the big screen.

Do you agree that this film will bring something different that other superhero movie’s cant or maybe you’d like to add even more? Well then drop a message or send us a tweet on our Twitter page.