Home » REVIEW: Stuck in the Gutters #2 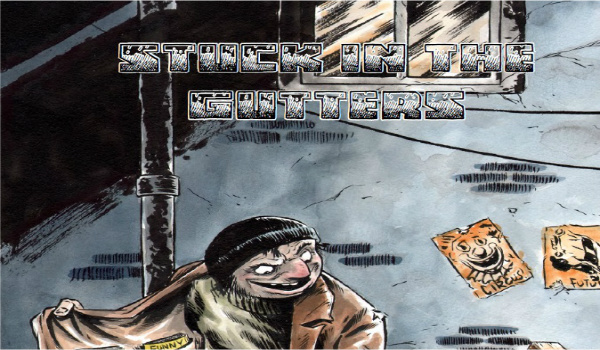 I’d like to welcome all our friends who have recently crawled out of the gutter and cordially invite you to jump right back in! That’s right, today we will be reviewing Stuck in the Gutters #2, so if you missed our coverage on the first issue of this massive anthology you can check it out here. Truly, I am quite happy that I have gotten the chance to review this second issue as there might have been a few things -just a few- that I was not able to talk about last time. It seems that while each issue of Stuck in the Gutters will feature a mostly different roster of writers and artists, some have returned to continue their threads from issue one so I will be able to mention some things that I previously missed. So then, let’s get started shall we?

First up we have the continuation of Jeremy Holt‘s “Strange Love or: How I Learned to Stop Worrying About Breaking into Comic Books,” which while besides having an excellent title is turning out to be a very intriguing real life story about a comic book writer on the rise. Often frustrating, and always interesting, “Strange Love…” is full of as many twists and turns as any great comic book, and should serve as a source of inspiration to anyone who has had an inbox full of rejection letters. I must reiterate that the essays in Stuck in the Gutters are probably the best part of the whole experience. For anyone who loves comics, this magazine is a wealth of information and entertainment.

Dan Hill and Ryan K. Lindsay return for another “Jam Session” in this issue in which they discuss Hawkeye’s increasing popularity in Marvel Comics’ Universe, and offer explanations as to why. I really enjoy these “Jam Sessions,” particularly as I envision Super-Fans Hill and Lindsay sitting in some studio somewhere, surrounded by comic book memorabilia while they take stabs at some of our favorite characters. The back and forth between Hill and Lindsay really helps to sell that illusion, if it is indeed and illusion, but I would really like to get an inside look at how these “Jam Sessions” are made. Just a little suggestion guys, if you are reading this. 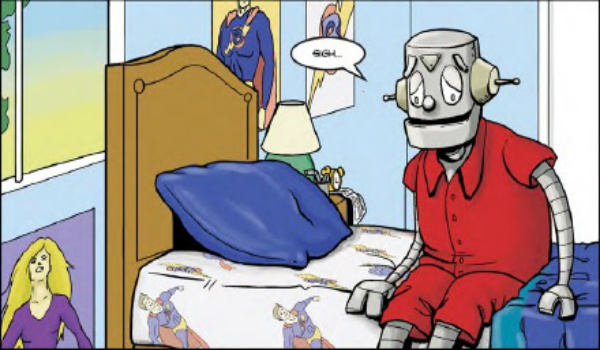 Of course it wouldn’t be another issue of Stuck in the Gutters without a few comics thrown in for good measure, would it? My personal favorite from this issue is Whiz Bang The Superhero by Forrest Helvie with art by Michelle Lodge. Maybe I just have a weakness for little robots (you should see my workspace), but this comic hit all the right marks for me. Cute little robot? Check. Childhood fantasies of superhero-dom? Check. Generic burglars in traditional “burglar regalia?” Check. Lodge’s artwork is really on point in Whiz Bang, and she manages to give our hero so much life despite his mechanical features. The script, while simple, is heartwarming enough on its own and pairs quite nicely with the aforementioned artwork. I’m looking forward to future installments of Whiz Bang; keep it coming guys!

Then there’s Off Switch, written by the editor himself, Leo Johnson with art by Alex Diotto, colors by Marissa Louise, and letters by ET Dollman. As I had stated in my previous review of issue one of Stuck in the Gutters, this magazine is often incredibly moving, and it likes to take chances with the kind of content it publishes. Off Switch depicts, in just one page, the life and times of a young soldier who has been pushed to the brink of violence by the horrors of war. What follows is a short piece about Iraqi War veteran Ivan Lopez, who killed four people and wounded sixteen others before committing suicide at Fort Hood military base. Johnson offers some insight into the effect war has on soldiers, and includes the suicide note of veteran Daniel Somers who also took his own life in the wake of his service in Operation Iraqi Freedom.

Sadly, these occurrences are becoming more and more commonplace amongst war vets and while so many families are affected by these misguided actions, their stories are rarely told through mainstream media outlets. It’s truly courageous that Johnson has included a piece like this in Stuck in the Gutters; if anything, it’s the kind of transparency we might be missing in today’s world, and it begs the question: when is the cost of war too much? 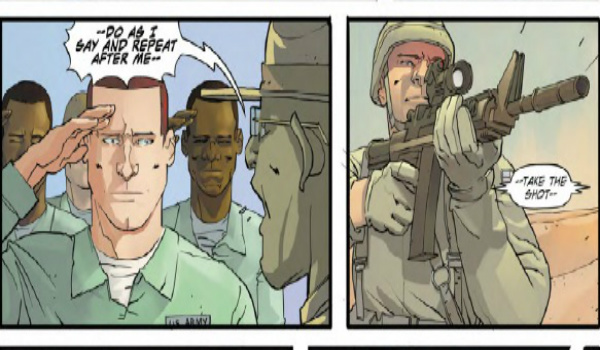 Alex Reynolds brings us an interesting essay about where comics fit into the pantheon of literature in “Are Comics Literature?” Reynolds defends the medium, citing works like Watchmen and Maus, which are both award winning graphic novels; the latter of which receiving the prestigious Pulitzer Prize award. It’s true that there have been many influential works within comics, and that while some have managed to break into the “mainstream” of literature itself, can we consider our favorite medium as actual literature? Reynolds gives us the ammunition and leaves us with the loaded question at the end of his essay; let the debate begin.

Guys, you gotta stop putting so much content into this magazine! How could I possibly review it all? It’s worth mentioning that this issue of Stuck in the Gutters contains a bit more comics than essays in comparison to the first issue, which suggests that there is no set balance in what we might see from issue to issue. In other words, it’s a surprise every time! Kinda like the prizes in Cracker-Jack! Except, you shouldn’t try to eat Stuck in the Gutters, especially since it’s a digital magazine. Unless you’re into that sort of thing; you sick puppy, you.

Issues of Stuck in the Gutters can be purchased here for a “pay what you want” price, while information about the magazine and submissions can be found at the official website. Don’t forget to support Stuck in the Gutters and all of its brilliant contributors here, and if you haven’t read any issues of this magazine I highly suggest you find a comfy spot in your local gutter and start at issue one. If you are a fan of everything comics, you will not be disappointed.

What did you think of the second issue of Stuck in the Gutters? Was it a worthy follow up to the jam packed first issue? Let us know in the comments section and on our Twitter page!