Home » Did Deadpool Meet Our Expectations?

When Deadpool was confirmed back in late 2014 I was delighted. Not just because I was a long-time fan of the character, but also because this now gave me a flimsy pretext to dress up as my favourite red ninja man just in time for Halloween despite most party goers not getting the costume at all. While I bought the suit and some foam ninja swords anyway this got me to thinking about how Deadpool, a character most non-comic reading movie patrons haven’t heard of until recently, could realistically perform in today’s wildly over saturated super hero movie market. When I walked out of the cinema back in February all of my doubts were laid to rest.

With more and more superhero movies getting churned out each year, writers and producers are looking for different ways to make the characters pop. The most popular approach at the minute is doing away with the straight laced right-is-right archetype and instead opting for your more eccentric, unorthodox and at down-right crass anti-heroes. This trend started in earnest with the first Iron Man movie back in 2008 and has bloomed more recently with Guardians of the Galaxy and the Upcoming Suicide Squad movie. This edginess is what people are looking for in their super heroes today and its safe to say that after its February release, Deadpool certainly delivered on this front.

Originally a super-villain in the early X-Men comics, the titular spandex-clad sword swinging protagonist (who also goes by the moniker of ‘The Merc with the Mouth’) is far from your normal super hero. Ryan Reynolds points this out whilst impaling a random henchmen early in the films first act. Directly to you, the viewer. Breaking the fourth wall like this is something the character is known and loved for in his comics, whether it’s to comment on a tired cliché in his own story’s plot or just to mock whichever pop culture icon is trending that week on twitter. As a long time fan of the comics seeing this aspect of the character pulled off so well on the big screen had me giving off a sigh of relief in the theatre. From here on out it was high octane fight scenes, casual and constant use of the F word, the blackest sense of humour and a dick joke every other scene. The film fully succeeded in getting all the best ingredients of the character across to hardcore and casual fans a-like. Including my favourite aspect of him, he’s a total goofball. 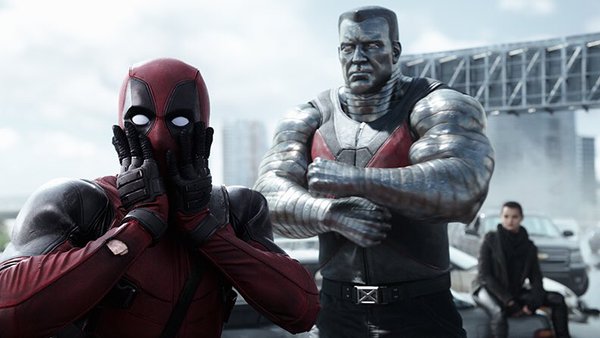 The film has pushed hard with its advertising by establishing a robust web presence on which Ryan Reynolds supplies goofy Deadpool promo’s in suit and in character, which serve as constant reassurance to long-time fans that the character will be the one they read in the comics and not a bald half naked guy with his mouth stitched shut and weird arm swords (Looking at you X-Men Origins: Wolverine). This whole project began with a fan driven movement, so it stands to reason that studio does everything it can to get these die-hard fans into theatres. Reynolds himself has gone above and beyond in this department shooting his own promo’s in a park on a handheld with some kids in a park. Rated as a 15, the film featured the violent and sexually explicit staples we read the comics for in the first place. I never saw one tagline or poster for the film that wasn’t in some way a reference to Deadpool’s crotch region. The best thing about this movie in my opinion is that it was all based on a huge gamble by the studios to back an unorthodox project based on fan support. If a film about a niche superhero targeted specifically at the fans that know him can get this kind of results at box office, we should start to see more original marvel productions that are a bit more radical as opposed to Spider-Man reboot after Spider-Man reboot.

This film did a wonderful job of creating its own hype train then riding it to success, both with fans and at the box-office (At which the move killed in terms of records). I read Deadpool because he’s fun, loud and scandalous. The exact vibe I feel director Tim Miller and lead actor/producer Ryan Reynolds nailed in this movie. The character went over so well with casual and hardcore fans a-like that a sequel is already confirmed. It’s clear to see that Deadpool thoroughly met a lot of our expectations, did it meet all of yours?