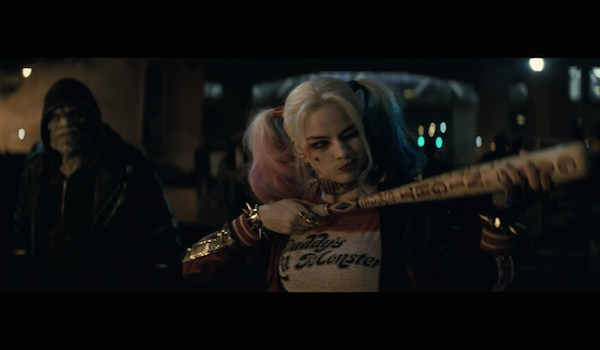 Okay. Suicide Squad. Let’s firstly talk about the newest trailer. How awesome was that?! This is probably my most anticipated comic book movie of 2016, mainly because Harley Quinn has been my favourite character since the Batman animated series of the 90s, so you can imagine my excitement when I found out that she was finally getting a live-action role! But this whole thing looks great. Oh, and that song choice was just perfect!

These days, people are more interested in anti-heroes and vigilantes than clean-cut heroes, which would explain the much darker turn that characters like Superman and even Wonder Woman have taken in recent years. People want to see characters that, I suppose, are closer to real people, closer to us; people that make mistakes and are sometimes a little selfish, so it’s no surprise that this movie is as anticipated as it is.

I love the change in tone of the latest trailer. The first, revealed at San Diego Comic-Con in the summer of 2015, was very dark and looked as though it would be in keeping with the tone of Batman v Superman. I’m glad that this won’t be the case. I’m glad that DC has opted for something a little more light-hearted; still violent and still a hard PG-13, but that’s fun; just the slogan of ‘Worst. Heroes. Ever’ tells us this is something that doesn’t take itself too seriously. With the recent popularity of Fox’s Deadpool, it isn’t all that surprising that at least one DC flick has gone this way as opposed to their usual tone. This also looks as though it’s following a little closer to DC’s New 52 than the classics. It’s great that they’re incorporating the new comic book universe onto the big screen.

Now, the characters. Unfortunately, I don’t believe that we have actually seen enough of Katana, Slipknot or Cara Delevingne‘s Enchantress to really tell what they’ll be like in the movie, but they’re all looking good so far. Will Smith looks like he’ll just be playing Will Smith as he always does, so we have an idea of what to expect from Deadshot. This isn’t a bad thing though; Will Smith has never not done a good job, and I’m confindent that this’ll be no exception. Slipknot looks like he’ll be pretty crazy, Killer Croc looks like he’ll be a more sadistic and somwehat scary version of the Hulk, and Jai Courtney‘s Captain Boomerang looks like he’ll be one of the more humorous characters along with Harley.

Speaking of, the two characters I can talk about have been two of people’s main concerns; fan favourites, the Joker and Harley Quinn. Both have been somewhat controversial not in their casting choices, but in their design choices, with people thinking that they look like something out of a high school horror flick. These characters have been altered plenty of times through the years, and I like that they opted for something a little new to keep them exclusive to the DC Extended Universe.

Jared Leto is an Oscar-winning actor, and we trust his skills; Leto brings his all to every role he has, and I have no doubts about his ability to pull this off. When his look was revealed, however, the internet blew up with what seemed more of a negative response than a positive one. Personally, I like it. I’m completely open with new directions for characters, and I’m glad they went in this direction rather than trying to keep it close to Heath Ledger‘s Oscar-winning performance. People need to get over Ledger. Yes, he was amazing; he fit perfectly into the Nolan-verse. The same way that Jack Nicholson wouldn’t have fit into The Dark Knight, Ledger probably wouldn’t have fit into this universe. And actually, the same controversy surrounded that casting choice that has been surrounding Leto’s portrayal. From what we’ve seen so far, it looks like the 30 Seconds To Mars vocalist will give a good, if not great performance. The look may be new, but his voice, characteristics and personality, seem to still be what we know and love, and if that Jason Todd theory turns out to be true, then holy crap this’ll be the best thing ever!

Margot Robbie as Harley Quinn looks great. I had no doubts about this casting choice. She has the look, her mannerisms are on point, and the voice sounds right- its a little less squeaky and less Brooklyn-accented than how the character traditionally sounds, but that’s okay. She sounds a little more real, less cartoony. The actress has really blown up in the last few years, and I’m glad she has. For those of us that watched the short-lived period airline drama, Pan Am, I think we knew from then that she had something. Since then, Robbie has starred alongside Will Smith in hustle-drama Focus and has proven herself worthy of this role in The Wolf of Wall Street alongside Leonardo DiCaprio. The only thing her character of Naomi was missing was the outfit and mallet, or baseball bat.

The Suicide Squad is made up of mostly lesser known characters to more casual fans, and with 2016 looking to be the biggest year yet for comic book movies, lets hope that they don’t get outshined by the bigger stars. It would seem that everybody who follows comics or eagerly follows movies are very aware of this film, and with three A-listers in the line up, it’ll attract old and new fans alike.

What do you think? Are you looking forward to Suicide Squad? Let us know in the comments or on Twitter.