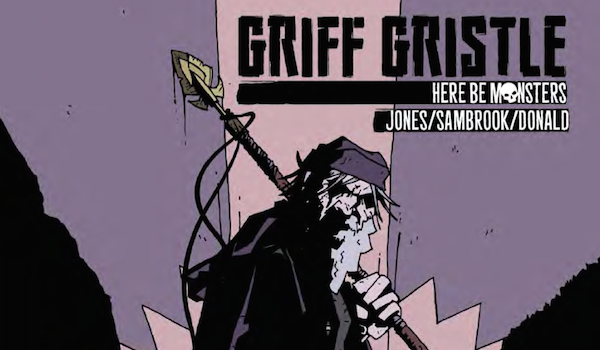 From the creators of Papercuts and Inkstains comes a new series that remains solidly in the realm of the abnormal. What I’ve decided to dub as a mystical mystery, Griff Gristle: Here Be Monsters is a series that maintains the general tone of Madius Comics and focuses less on the standard and more on the strange and odd. The comic is one of 178 others currently on Kickstarter and, only one day into its campaign, it Griff Gristle had no trouble reaching its £1300 goal. Already over-funded, the Griff Gristle campaign is one that has likely exceeded its desired goal due large in part to the fact that the Kickstarter’s teases of the comic have done an exceptional job of sparking patrons’ interest. With a full month to go in its campaign, Griff Gristle could use the support of anyone willing to give it and, in case you’re still wavering as to whether or not this is a project worth your hard-earned money, it is.

The first issue, despite being a pretty substantial 30 pages, reads more as a prequel to the series as a whole than a standalone comic meant to be read once. Reading Issue #1 is the literary equivalent of getting to lick the brownie batter off a spoon while tapping your foot impatiently as you wait for the actual brownies to be ready to eat. This is due large in part to the pacing of the comic. It’s written in such a way that makes it initially seem as though it’s going to be a one-off. There is a beginning, middle, and end to the mystery within the comic that makes it seem as though the story can realistically come to a close. Lucky for us, epilogues exist and Griff Gristle’s makes it clear that Issue #1 is just the beginning of the mystery and mayhem that the titular character will find himself in over the course of the series.

This is a very good thing because, while Issue #1 is a superb introductory comic for the series, it would have been disappointing as a one-shot. Simply because, as mentioned, it is the teaser of all teasers. The story is initially tied up in such a seemingly nice bow that readers are left feeling a bit underwhelmed with an unidentifiable void waiting to be filled. When the comic’s central story is wrapped up, there’s a lingering feeling that there could have, and perhaps should have, been more.

But this feeling doesn’t last long because it’s made very clear that this introductory comic was meant to leave you wanting more.

Throughout the course of Issue #1’s story, there is an almost palpable understanding that whatever is happening is just the tip of the ice burg. This feeling that something more is out there, and coming, is one that is vindicated by the close of the comic through the epilogue’s confirmation that the characters’ presumed success in this story only means trouble for those that have yet to be read.

Issue #1 of Griff Gristle: Here Be Monsters introduces us to a seaside town, infiltrated by shady mobsters and being punished by unidentifiable forces for giving up its quaint, fishing village, charm. This punishment comes in the form of drowned sailors and wrecked ships and it’s the most recent mysterious ship-vanishing that brings our central character Griff to the scene. Having dealt with the paranormal before, to the point where his own vessel is laden with ancient tombs and runes meant to ward of whatever evil spirits may come his way, Griff willingly sets out to rid Charlsberg of its pesky curse. He picks up a new sidekick along the way, the sister of a recently drowned sailor, and the two discover something strange on the ocean floor.

Rife with evil spirits, dilapidated churches, and a vibe best described as, “ominous as hell,” Griff Gristle: Here Be Monsters is a series that looks as though it will be a hit for fans of the strange and abnormal. As is to be expected where Rob Jones and Michael Sambrook are concerned, the comic’s backbone is a dark humor and wit that drives the characters and is accentuated by Rory Donald’s artwork. The synergy between the comic’s written words and aesthetics make it an entertaining and visually enjoyable read.

Ending on a cliffhanger, Griff Gristle: Here Be Monsters does a successful job at pulling the reader in with enough mystery and intrigue to leave them wanting more.

Be sure to head over to Kickstarter to support Griff Gristle: Here Be Monsters and check out Madius Comics on social media for all of the latest Griff Gristle updates.