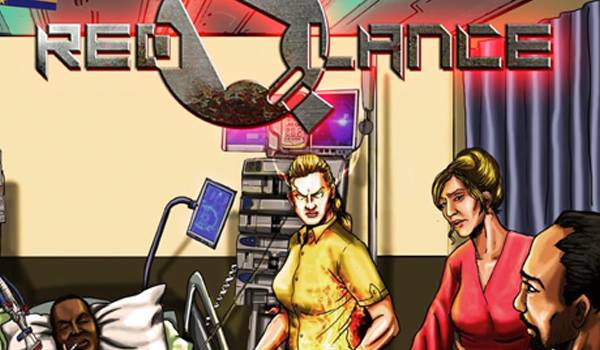 Red Lance returns for the third issue in the superhero series. Picking up after the events of the previous instalment, this issue fills in some key information set up in issue 2 such as the results of Bricker and Stonefish’s secret mission and just how new member Sonaru fits into the superhero establishment.

For those that don’t know much about the comic series yet, it’s a comic series following Red Lance, a group of superheroes put together to fight evil. It’s a good old fashion superhero series that focuses more on the story and establishing strong and likeable characters.

I’ve been lucky enough to review the previous two issues of the superhero saga and it’s safe to say it’s building to something spectacular. As with the other two, issue 3 is an action filled extravaganza that delves further into the twisted minds of Rupinella Daniels, Vycia and Cataclysm. On the other side of the spectrum with the heroes, the speedster Raceway is also recovering in hospital after the attack that took place in issue 2.

So to dissect this issue, first I will look at the positives. Issue 3 continues with the trend of a well balanced story. There’s quite a lot to digest in this issue, but creator Gary Bloom balances everything perfectly, making sure not to spend too much time in one particular area.

This issue is also an engaging, thrilling and action packed addition to the superhero series, one which fans of the series will be pleased with. Issue 3 also continues their unique style of illustrations that work well in order to progress the plot further.

The story picks up with a news report with regards to the ending of issue 2, in which two of the heroes of Red Lance trashed MedryTech labs. Two journalists with conflicting ideas of how the superheroes operate come to blows, something that is a welcome additional plot to the series and channelling pages from The Dark Knight Returns that sees the anchors come to blows over their opinions on the hero group. From here Rupinella Daniels appears further trying to damage the reputation of the heroes.

Further into the plot and we see Stonefish and Sonaru team up to tackle a potential sexual predator, this short scene is key as we see that new Red Lance member Sonaru finds it difficult to control her rage as she almost kills the man before being talked out of it. Over the last few issues we’ve really chipped away at the characters, gradually learning new information about each individual.

There’s also a return for the antagonists of Red Lance, Vycia and Cataclysm, who have been underground since their attack on the streets as seen in the first issue. Cataclysm is beginning to question everything that is going on, that is until Vycia once again controls him. This leads one to think just how far will she take the troubled scientist, or will he manage to break her curse?

Overall the comic is a welcome addition to the series, setting up nicely for issue 4 by again finishing on a cliffhanger. If you’re a fan of Red Lance you’ll know what to expect with the setting and character development. If you haven’t checked the series out yet, then I urge you to as it can be enjoyed by casual and avid comic fans alike.

Are you a fan of the Red Lance series? Will you be contributing to issue 3? As always we’d like to hear from you, so don’t be afraid to add your thoughts in the comment section and on Twitter!