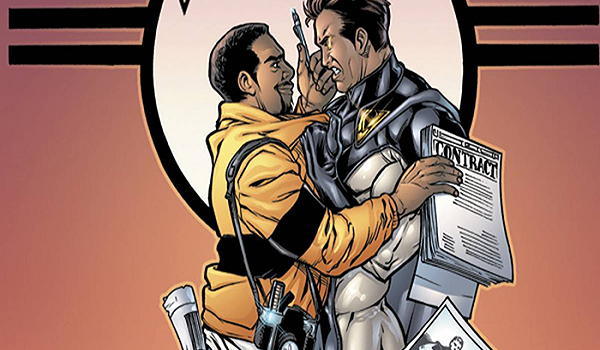 The superhero genre has become a massive success in recent years due to movie adaptions. So it’s easy to see why creators Jay Faerber and Jamal Igle tackled the popular genre in their comic series Venture.

Venture follows the narrative of wannabe journalist Reggie who wants to be taken seriously with his news reports, which aren’t believed because they are deemed too ridiculous. His moment of glory comes about when he encounters Joe, who happens to be a superhero. The comic takes on a different approach to most superhero stories through exploring the consequences of “being exposed”.

Joe is reluctant to reveal himself and wishes to remain in the side-lines where heroism is concerned. Reggie, however, wants him to become a full-on superhero in order to gain his personal goal of securing a massive scoop. This develops a complicated relationship between the two characters which I enjoyed following. It’s clear Reggie is a selfish character but you do slightly sympathise with him because you understand that he is underappreciated and not taken seriously by others.

Joe, on the other hand, is a very likable character but isn’t necessarily a straight forward superhero. Sure he wants to save people but only on his own terms. He doesn’t crave the spotlight and instead rescues people without being noticed. When Reggie starts to point him towards mainstream heroism he is sceptical but eventually agrees to participate in all the clichés, such as getting a costume fitted for himself, and eventually becomes an icon.

The cliché elements are put into play in a unique way and become part of the story-telling, with the characters themselves addressing them as if they were adapting classic superhero comics into a real scenario. It is interesting that the main concentration is about publicity and how it can affect a superhero. Joe worries that his private life could be affected while Reggie is just after glory.

It is a strange friendship and not one that has a whole lot of benefits, with Reggie merely using Joe to gain fame through an article exposing the superhero. Reggie in fact tries blackmailing Joe early on in the narrative. He shows interest, like any normal person would, bit it is fairly clear, even to Joe, what his true intentions are. Joe even questions him about his motives at different points through the comic, with one scene in particular showcasing Reggie risking a woman’s life in order to get a shot of Joe saving her for publicity. He claims that Joe had it covered, despite Joe’s request in the middle of the battle to help out, but in reality he could’ve got her killed. It was at this point that Joe saw Reggie for what he was: a greedy journalist.

I did enjoy how Argus, the only main villain so far, was riddled with cliché, with his own character even pointing out that he was never going to win because he was the villain. It was developed on the stereotype that nerds with too much time on their hands can become crazed, with Argus building a special armoured suit to battle against his arch-nemesis, killing his own mother in the process.

The great part was Reggie, now trying to make a scoop from the villain after Joe abandoned him, calling him out on his flaws. Argus wanted to defeat his arch-nemesis, Joe, but never had the two met prior. In the end it was revealed that the reasoning behind his attack was gaining fame. This in turn pointed the narrative back to the comic’s core aspect, almost reflecting on Reggie and his attempts at gaining fame by whatever means.

I think the one flaw I have with Venture is the narrative itself. Though it’s good as a character piece, it lacks an on-going storyline. I think with time that will be cleared up as the comic is still in the early days of development. With a bit more focus and expansion on the already existing ideas, the series will certainly pick up. I can’t say it adds anything particularly new to the superhero genre but it doesn’t detract from it either. Faerber and Igle are simply having a bit of fun and it shows.

However, the comic has to be praised on its dialogue, which I found to be believable and reflected each and every character perfectly, allowing you to understand their individual personalities and motives. The panels were creative as well, all put together to help draw you into the action and drama.

Venture certainly holds promise, especially with the progression of Reggie and Joe’s relationship. There is also the expansion of the idea that there are other superheroes within this world other than Joe. I think with a bit more time, as stated above, the series will find itself and produce something entertaining for superhero fans to stick their teeth into.

If you would like to check it out head over to Amazon to purchase your own copy. Also, please share your opinions on Venture in the comment section below or on our Twitter page.