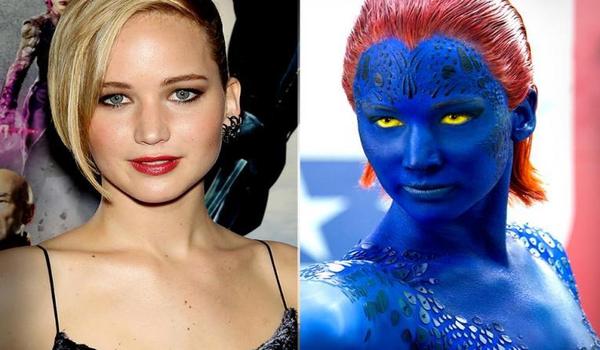 There’s no denying Jennifer Lawrence is a power-house of an actor. She was a “crazy slut with a dead husband” that brought Oscar gold and a trip down a flight of stairs. She skinned a squirrel on screen. She survived three seasons on a terrible TBS original sitcom. She’s done a lot, and now she’s re-stepping into her blue, scaly body suit for X-Men: Apocalypse to reprise her role of Mystique/Brett Ratner’s-re-imagining-of-a-slave-name Raven Darkholme. In X-Men: First Class, Mystique learned through potential love interests and a camera panning up her body to be her true blue self. However, with the trailers of Apocalypse, it appears Lawrence’s star power has the potential to eclipse the movie.

To be fair, as of now, I haven’t seen the film. Perhaps for the trailers, they specifically used scenes where Lawrence looks like herself. Perhaps not, especially considering yesterday I passed by a gigantic poster for Apocalypse with Lawrence planted dead center, looking like her usual, just a regular person self. Believe me, it was rather large.

Like the poster, the trailers feature mostly Lawrence looking more Jennifer Lawrence rather than the character she is supposed to be playing, which seems like a step backwards for Mystique’s character development. She learned to be mutant and proud in First Class. Then, the Mystique we were shown in X-Men: Days of Future Past promised to give us back the ferocity Rebecca Romijn displayed in the original X-Men trilogy, The Last Stand not included. Romijin’s Mystique strutted around in her natural form for a majority of her time on screen, the exception being when she was in disguise. Using this Jennifer Lawrence disguise was tied primarily in First Class to her insecurity of her mutant appearance, but once Magneto convinced her she was attractive as is, she was Mystique for the remainder of the film. In Days of Future Past, she didn’t have time to be self-conscious about her body. She had to kill Peter Dinklage.

Now in Apocalypse, she waltzes around Xavier’s school, among friends or at the very least people who don’t want to attack her, in her Jennifer Lawrence suit. Even when Apocalypse and his four Horsemen break into the school (I assume they weren’t invited), she’s Lawrence Mystique, not actual Mystique. As Magneto mentions in First Class, it takes energy to stay in that state, so why would she even be in this disguise when it’s not needed? I understand in public, it’s probably best to keep your mutant powers under wraps if you want to law low. I also understand from a marketing perspective, if you have an actress as high-caliber and popular as Lawrence, you’ll want to show her off. From a story perspective, it’s confusing. The only times she actually looks like Mystique are when she is fighting Apocalypse and when she gives a rousing voice-over to the newest X-Men recruits. I didn’t realize Jennifer Lawrence was a new X-Men.

Character appearance aside, the other aspect of the film Lawrence’s shining star is threatening is by presenting Mystique as the hero of the story. In any movie involving major warfare or a high stakes sporting event, the hero is always waiting in the wings to deliver that speech to his/her downtrodden teammates about perseverance, strength, courage, words used so loosely now they frequent Hallmark cards. For X-Men Apocalypse, Mystique is that hero.

Who goes to an X-Men movie to see Mystique? She’s not even an X-Men! She’s a villain. Don’t get me wrong, the character herself is great and entertaining. Still, she is not supposed to be the focus of an X-Men film. She’s the one, it appears, who goes out and gathers new X-Men like Nightcrawler for battle. She’s the one, during Cyclops’ introduction trailer, who is described as a hero by his schoolteacher for saving the president’s life. That’s not what happened, at all. Meanwhile, Xavier, a better candidate for film protagonist, gets wheelchair-napped by the Horsemen. The final shot of one trailer is purposely of Mystique getting choked by Apocalypse, because that is who the audience is supposed to get behind. That is the character whose journey we are supposedly following, and who we are expected to care whether or not she makes it out of Apocalypse alive. It’s a shame it has nothing to do with the character, but because of the woman playing her.

The only reason Mystique is emerging as a fusion anti-hero in Apocalypse is because of Jennifer Lawrence. It has nothing to do with story. It would make more sense for her character to be one of the four Horsemen. But they would not put Lawrence into a further supporting role. Or apparently make her look like the character she’s portraying for too long. Because Lawrence is nice to look at. It’s not an attack on the actress herself, but a criticism of the people responsible for the film who allowed her star power in real life to influence and shape the script for X-Men: Apocalypse. In one trailer, Mystique, in her Lawrence body, says she’s not the hero. Agreed.

What do you think of the amount of Jennifer Lawrence in X-Men: Apocalypse? Sound off in the comments or send us your thoughts on Twitter!