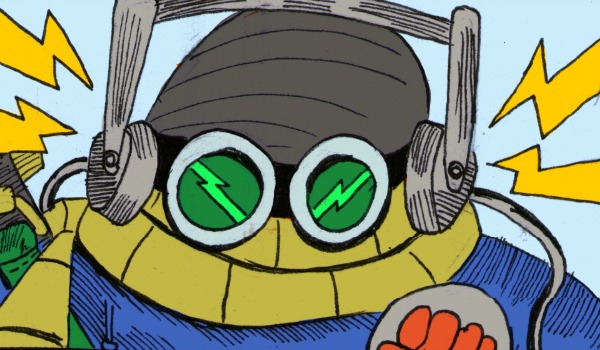 Oftentimes a comic book will come a long that sticks in your head. For some reason or another a chord is struck and it sticks, be it for the colour scheme, a particular image or the dialogue. And then comes Funk Soul Samurai. A comic that is unique in its imagery and in the way it delivers its narrative. A technique that is used to great effect.

There are no words. Literally. Funk Soul Samurai is utterly unique in its delivery of narrative and most definitely lives up to the Funk in it’s title. Not that this is not to be expected from the team at Madius Comics who are known for delivering the unusual and the mad cap in terms of comics. However with Funk Soul Samurai, created by Nick Gonzo, they may well have hit on gold dust.

As you may have guessed from the intro, Funk Soul Samurai has no dialogue. Zilch. Nada. It tells a basic story of a guy surviving in what appears to be a monster filled post apocalyptic earth. All he wants is a cold slurpee, but as with any dystopian future there are barriers and hurdles to face before getting anything. In this case that is a whacking great monster. One that seems intent on stopping our music loving, goggle wearing getting his desired ice based beverage. Thankfully the sword wielding samurai has mad skills.

The narrative is driven by images and written sound effects. The images are scratchy, grainy and unrefined, giving the comic a feel of frenzy and a lack of control. A style that suits the erratic feel of the comic well, reminiscent of other off the wall comics such as Tank Girl. The bright, in-your-face colours and the retro 90’s clothing and styling live up to it’s claim that it is the best MTV TV show never made. A little like a post apocalyptic Beavis and Butthead, Funk Soul Samurai has similar fast paced, jittery presentation.

Funk Soul Samurai may not have the most convoluted plot however the simplistic survival based narrative intrigues the audience and although there may not be the most well developed and interesting characters the Samurai is so individual and so memorable that you cannot help but route for him, and want to see him succeed in his exploits.

Funk Soul Samurai has a charm all of its own. There is an ambience to it that makes it as appealing and enticing as it is unique. The astonishing visuals draw you in and the unusual concept keeps you there. The individuality and originality shine through and provide a visual treat that may not have the depth of other comics, but offers enjoyment and escapism to its audience.

The comic is a treat for the yes and if you want to get your own copy, and I seriously suggest you do so, here is the relevant link:

What are your thoughts? have you read Funk Soul Samurai and want your say? Sound off in the comments or send us your thoughts on Twitter!