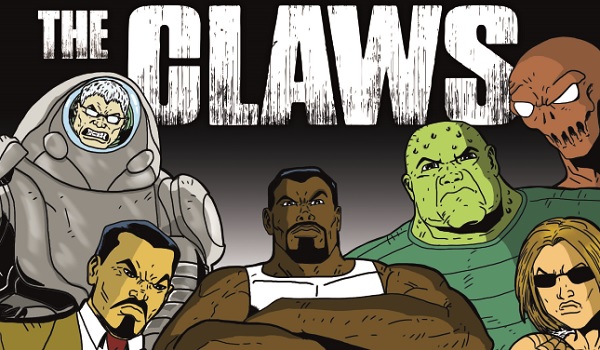 Imagine what would happen if Earth’s most powerful superheroes were killed? Cities like Gotham and Metropolis would crumble before the might of the world’s deadliest super-villains; crime would be a twenty-four hour a day enterprise, citizens would cower in fear, and any cat that has got itself stuck up high in a tree had better get comfortable because it’s going to be a while before Spider-Man comes to rescue it…just saying.

Yes friends that is the question that creator Richard Carrington asks in his brand new series The Claws: what happens when the hero dies? I think some of us can admit that a world full of villainy, chaos, gluttony, and hedonistic and nefarious deeds seems at least a little bit appealing, no? Okay fine, at least one of us can admit it (raises hand sheepishly). With that, let’s get started shall we? Spoilers ahead!

Welcome to the city of Olympus. There was a time when criminals ran away screaming like little girly-men (Arnold voice) from the sworn protector of Olympus, The Wrath, but then the villains had an idea: what happens when they drop their petty differences and instead join forces against their common foe? We’ve seen villains work together plenty of times in superhero comics, but The Claws takes the notion an extra step and offs the hero within the opening pages of its premiere issue! 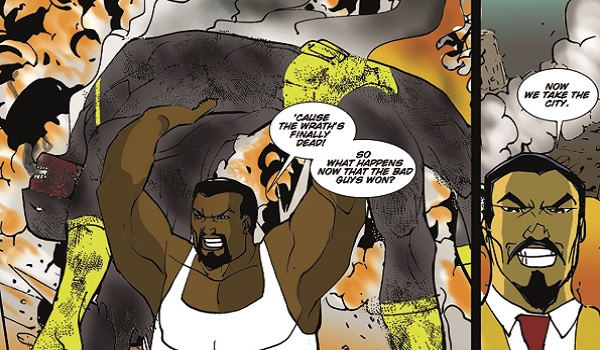 After being brutally beaten, The Wrath is blown up and left a smoldering corpse in the wake of his final battle with The Claws. What comes next are five glorious years in the super-villain spotlight. We’re treated to a very Escape From New York-esque map of Olympus in which the city is sectioned off into ten districts, each being run by its very own super-villain overlord!

Here we also get to learn the names and specialties of the new, undisputed rulers of Olympus. Take for instance “The Carny,” who is a boorish, bigoted, murderous, sleeveless-flannel-shirt-wearing red neck maniac. Oh, and his specialty is gambling. The Claws doesn’t take itself too seriously, which is one of the many strengths of the book. Even in the opening pages as the villains mercilessly pounded on The Wrath (until he is dead, tee hee) I felt a little tickle that soon erupted into maniacal laughter by the time Bulldog Barnes (great name) hoisted The Wrath’s lifeless body triumphantly above his head. Yes friends, being bad is fun; a ton of fun, in fact.

One of my favorite things about this book is the way in which it addresses superheroes. During their encounter with The Wrath, The Claws throw all kinds of shade (yeah, I’m hip); calling The Wrath a fool, and a “smug, arrogant ass,” (my personal fave) while they take revenge on the hero that had regularly thwarted their plans in the past. Admittedly, there have been times where I have flipped through the pages of books like Superman and thought to myself “he is a little bit on the smug side…and I don’t like it.” If you have ever shared this sentiment, The Claws has got you covered.

This first issue deals with the disappearance of the super-villain known as “The Seeper,” who distributes a street drug called “U-Topia.” Naturally, in the upside-down, backwards world of The Claws, this is a serious dilemma. To this end our…heroes (?) hold a meeting with suspect numero uno, “The Gentleman,” who has been distributing his own drug called “Diamond Dust” in The Seeper’s absence. Hmm…I wonder what The Gentleman’s game is? It certainly doesn’t seem very…gentleman-like. Ehem.

With The Gentleman cornering the drug market, it’s up to The Carny to investigate The Seeper’s disappearance, which leads to a hilarious showdown with a low level criminal that features tons of filthy language, scantily-clad women, and a nice electrocution scene! Capital! The dialogue in this scene had me rolling in laughter for all the wrong reasons, but it works so well for a book like this. Be warned though: The Claws is absolutely not for children, so don’t let them get their grubby mitts on it. Or if you are a kid…uhh…don’t read this comic, okay? 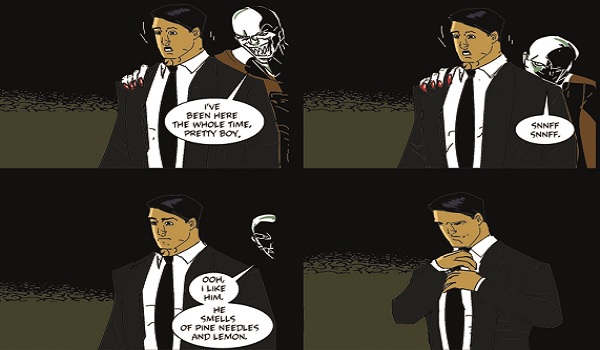 During The Claws’ meeting we are introduced to “The Loon” for a brief moment, but that’s just about all it took to get me wanting more of this character; he’s slimy and creepy, and I just love that sort of thing (just kidding…kinda). It also seems that this Gentleman fellow is up to “no good” in the context of the world of The Claws, which leads to a cliff hanger ending where it is revealed that The Gentleman is none other than The Wrath himself; or at the very least, a “copy cat” version of The Wrath. Will we be treated to yet another superhero’s death in future installments? Let’s hope so, because this book is all about the villains and I would hate to see them being brought to justice by some self-absorbed “hero” vigilante.

The creative team behind The Claws consists of Carrington, who handles the writing, colors and letters, and J.C. Grande, who takes care of the ol’ pencils and inks. I found the book to be very well drawn, with consistent artwork throughout. Each super-villain maintains their own, distinct appearance which keeps The Claws aesthetically interesting, while the variety in their personalities makes diving head first into the world of The Claws very easy. I think it’s been pretty obvious that my personal favorite aspect of this book is The Carny, but there’s just so much more to like.

What does this all add up to? The Claws is a book that takes a lot of chances. The whole “killing the hero immediately” thing aside, there are some moments that may offend some readers, but to be perfectly honest I thought that Carrington injected just the right amount of comedy into his script to keep it light enough. I fully recommend this book to anyone (as long as you’re not a child!) with a sense of humor who would like to see the world of heroes and villains flipped on its head.

As always, with independent, creator-owned comics such as The Claws, us fans have to do our part if we wish to keep on reading. Head on over to The Claws official Kickstarter page and help Carrington reach his goal so he can get this thing to print! There are some cool rewards such as exclusive prints, and you might even wind up being immortalized in the pages of a future issue of The Claws (yes, you!). What are you waiting for? Get down with your bad self!

What do you think of The Claws? Are you ready to see the villains finally win? Sound off in the comments section and on our Twitter page!