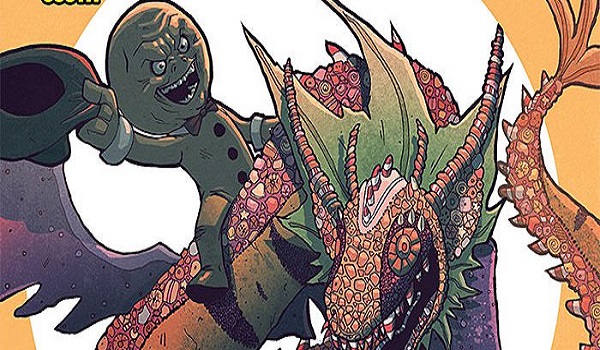 The utltimate punster Gingerdead Man ups the ante of gorey schlock and tasteless (see what I did there) puns in issue 2 of Gingerdead Man. Picking up right where the previous issue left off, we get immediate exposure of sweet comic book nudity on the first page. This turns out to be on the TV that Bill is watching next door at Cup A Joe with Kayla. We are introduced to two police officers investigating the noisy disturbances coming from the other side of the wall. When the police finally encounter Gingerdead Man, his sexual depravity and crass humor set the groundwork for a wild issue of messy exploitation.

This issue establishes the idea that Gingerdead Man can multiply himself with an army of little foulmouthed copies of himself. After one of the cops eats his arm and becomes super stoned, Gingerdead Man realizes one of him is not enough to go around and the more Gingerdead Men there are, the more havoc he can wreak and brains he can fry. We also see the return of Sylvia and her crew who went searching for cookie dough. The final page suggests a splatter of helpless stoners for the next issue.

This comic operates in a very serialized manner as issue 3, much like the previous one, picks up exactly where the last one ended. And not only is there an army of Gingerdead Men, but a crazy sugar clusterfuck called Fux The Magik Dragon enters the scene. The issue is definitely the most action packed of the three, with Kayla finally joining the conflict. Her inability to match Gingerdead Man with quips was a refreshing touch. Her impulsiveness to act is what defines her heroism and her makeshift suit only adds to her charm. The violence is excessive as expected, as are the consistent puns. How writer Brockton McKinney is able to come up with countless food-related puns is truly something remarkable.

While this is the conclusion of this story arc, there is of course a slight tease of what can still come in the next issues. The brashness of this series will probably not win any new fans over, but for those entertained by this level of juvenile humor, there is a lot to admire here. It operates as the sort of guilty pleasure that you don’t actually feel guilty about. Sure, you don’t want your parents reading it, or even knowing of its existence, but the amount of amusement found can only put a big goofy grin on your face.

The narrative may not be the selling point of this comic, but there are a lot of avenues to explore with this. The first story arc was pretty contained by way of setting and characters, so it’ll be interesting if Gingerdead Man takes on new opponents (or stoners).  The sexual overtone in these issues is enjoyable as long as Gingerdead Man is just fucking inanimate objects. The excessive nature of this story, while being this crude, is not enough to completely gross you out. It’s silly and crass, the way teenage boys are. It pushes the boundary without feeling offensive. And for that, you shouldn’t feel embarrassed to laugh.

What did you think of these issues of Gingerdead Man? Are you excited to see where the series goes? Let us know in the comments or on Twitter!