Home » Age of the DCAU: Justice League vs Teen Titans 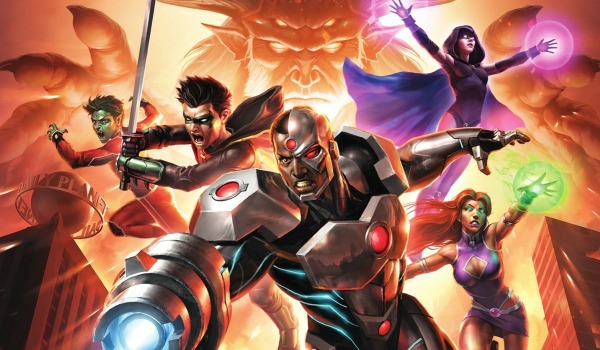 I can’t say I was all too fond of the Justice League growing up but I did become more appreciative of them in recent years, whereas I always had a soft-spot for the Teen Titans. It was exciting seeing younger superheroes saving the day, showcasing a nice blend of comedy and seriousness. Plus Robin was the leader and I liked Robin due to his association with my favourite DC superhero Batman. I also became rather fond of Robin’s team and their interesting characteristics, with Raven becoming my favourite due to her isolated nature and deep, troubling problems from within.

Having not seen any of the previous films I had to quickly jump on board and come to grips with the way the DC characters worked within this established universe. From the start it was disappointing seeing so few of the Justice League but I guess, as the film went, the focus of the film was never on them so this didn’t truly matter. What was noticeable early on was how Damian Wayne (Robin) was a troublesome individual. He certainly wouldn’t be my first choice for protagonist, especially with his attitude problems and arrogance. But, at least this is all justified due to his harsh background having grown up with Ra’s al Ghul as his grandfather and having been trained to be a member of the League of Assassins.

After he cannot learn how to be a team-member during a Justice League operation, i.e. their assault against the Legion of Doom, Damian is sent to the Teen Titan headquarters to be trained by Starfire with the rest of the team, consisting of Raven, Beast Boy and Blue Beetle. Of course the narrative becomes a story about him accepting himself, nearby growing as a person and eventually learning how to work as a team to become apart of the Teen Titans.

Damian shows a lot of resistance throughout and at first is reluctant to show even the slightest bit of compassion, let alone attempting to join in with training or socialising. It was great seeing his arrogance nearly getting him killed after trying to pick a fight with Blue Beetle. The scenes between him and Raven were some of the best parts of the film simply because you could see a connection between their characters. They both shared a terrible past which in turn reflects the people they are now. In many ways they were the same and needed one another to help the other to escape their darkness. And as I said above, I just simply love Raven’s character and so it was awesome to delve into her history.

The villain himself, Trigon, was just okay. He didn’t really become anything new because he felt generic, which is a shame considering who he is and how much backstory was told about him, especially concerning his connection to Raven. But once he does become the threat at the end of the narrative he does very little, ultimately becoming a rampaging beast without much conscious or purpose other than destroy everything in front of him. And for convenience sake the Justice League are powerless to stop him. Though I suppose it was better to see the Teen Titans steal the show since it was their debut in the animated film series.

On an important note, the title. The title of this movie is extremely misleading and makes you believe you are in for a massive showdown of some description. Say what you want about the fight between Batman and Superman in Batman v Superman: Dawn of Justice but at least something legitimately happened. Here we have short but sweet scenes that felt flat, not to mention the Justice League in question are being mind-controlled. Batman is put out of the picture straightaway after he resists the takeover with a nerve toxin developed for Bane, which I suppose just shows how resourceful the guy is but sadly he is out of the fight from then on and doesn’t contribute to the film’s conclusion.

What the film does focus on is rather intriguing and I was happy with what I got, but the title doesn’t suggest this and instead hypes you up for something that will never come. The narrative’s focus is on the introduction of the Teen Titans and Damian joining them. Again, Dawn of Justice wasn’t technically about the fight and rather the establishing of the Justice League, but at least this is indicated within the subtitle. This didn’t bother me too much as I enjoyed the Teen Titans introduction but that doesn’t excuse a lazy title which is there to create hype and nothing else. I know I’m nit-picking but the point still stands.

I think this film does better at its character development rather than its action scenes, with the third act actually proving to be rather tiresome and non-interesting, especially with how bland the Justice League were (and don’t get me started on Ra’s al Ghul’s cameo). In terms of an origins story for the Titans, it was really good but I just wished everything else came together more coherently. Needless to say though I do wish to give the rest of the films a go at some point. I can see that this isn’t the best film in the series but it served as a nice stepping on point. I definitely recommend Justice League vs Teen Titans to those who have followed this animated film series, and even those who haven’t because it is still an entertaining watch. Just don’t expect it to be the best thing DC has produced.

Have you seen Justice League vs Teen Titans? What did you make of it? Let us know in the comments section or send us a Tweet!