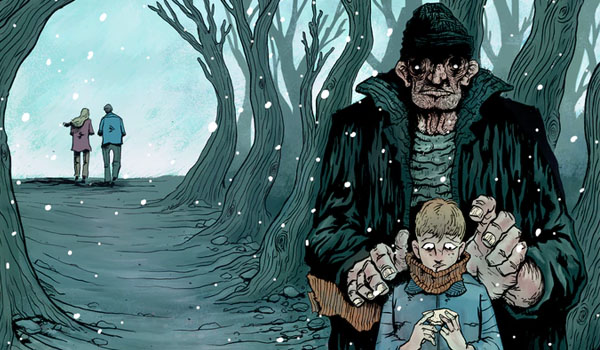 Not too long ago, we reviewed the series Hexes, a series of disturbing, spine tingling tales of ordinary people experiencing not-so-ordinary encounters. Here at AP2HYC, we sat down with writer and creator Simon Birks to discuss his hauntingly beautiful tales of isolation and curses.

AP2HYC: Can you just start off by giving us a brief introduction as to what Hexes is?

Birks: Hexes are a series of supernatural/horror stories penned by myself and drawn by different artists. Issue 1, The Boy Who Came Closer, is drawn by Ege Avci. Issue 2, Waking Nightmare, is illustrated by Lydon White.

The stories are less “out and out” horror, and more focused on odd and disturbing situations that seem to happen in isolation.

The comics themselves are 24 pages long (not including the cover), and are full colour. All the pages are completed, and we are now using Kickstarter to raise the costs of printing them.

Basically, the Kickstarter is allowing you to preorder the comic, along with a host of other goodies.

AP2HYC: What made you decide to structure this series into two one-shots as opposed to one continuous story?

Birks: When I got comic cons a lot of people who stop by my table ask if the issues are complete stories. Both of my current titles, Sinners and Gone, are ongoing series, and often people would rather wait until the story is finished before committing to it. By creating a series of one-shots it gives these con-goers the opportunity to enjoy our comics there and then.

AP2HYC: What made you want to writer both these stories together?

Birks: Both these stories were originally written as short films, and have long been gathering dust on my hard drive (or is it cloud nowadays?).

When I decided on writing a supernatural/horror comic series, I looked at my existing body of work, and used these two stories as the start of it. Also, doing two stories together meant that backers of the Kickstarter would have more choice of rewards.

AP2HYC: What was the process for conceptualizing both narratives?

Birks: I suppose you could say writing is my hex, my curse. If I have a spare moment somewhere, and a laptop nearby, I’ll be writing. Basically, I can’t stop!

So when it comes to writing a story, I tend to write until it doesn’t make sense, then stop, and approach it by writing from a slightly different angle. About halfway through this process, the actual story becomes clear, and I’ll change it all around again. Suffice to say, I write until the story feels right.

Oh, and of course, writing isn’t actually a curse, it’s a blessing.

AP2HYC: What Made you decide to use different art styles for each issue? What was the process in deciding each art style?

Birks: This is a fairly simple one! I chose great artists to illustrate these stories, and great artists are able to commit to drawing one issue a lot easier than a whole series. Of course, it also makes the stories unique. And it means I can have two drawn at the same time. Oh, and also people like different styles of art, too.

Okay, so that wasn’t as simple as I thought it was!

AP2HYC: One of the most prominent features of both works is its tone and atmosphere. What were some inspirations in creating the style of both narratives?

Birks: I think one of the defining features of Hexes will be this tone. The stories happen to the everyday people. They happen in small pockets all over the world, and they shift back and forth in time to show how the story came to be.

AP2HYC: While there are clear connections between both stories, the two narratives have very different supernatural elements. Do you envision them occurring in the same world? Do these stories have a deeper connection to one another?

Birks: The Hexes stories definitely occur in the same universe (hexiverse?!). Whilst there isn’t anything to immediately connect them, apart from both protagonists being cursed in one way or another, I envisage them being connected, and going forward with the series, we may start to see similar elements reoccurring.

AP2HYC: What do you want people to walk away with when they finish reading Hexes?

Birks: The feeling that they want to read more! And that they were taken on a story they weren’t expecting, which made them feel unsettled, and hadn’t read a derivative of somewhere else.

You can check out Simon Birks’ Hexes by contributing to the official Kickstarter campaign. If you’re a fan of the unsettling and the disturbing, don’t miss out on this great read!