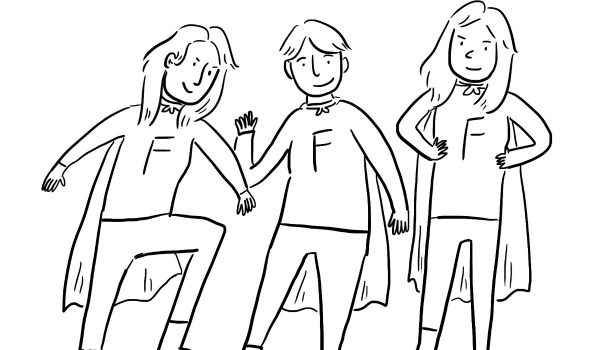 If the big-wigs in the comic world like Marvel and DC have taught us anything about women, it’s that there’s no greater way to feel a job well done than letting a man do all the hard work while wearing a barely-there outfit you’d probably wouldn’t wear around your grandma. Unless you have a very liberal grandmother, then how fun for you! Enter author and artist Silvia Carrus. In her comic The Feminist Superheroes, the titular trio of caped crusaders dole out social justice through well-informed arguments and a frequently checked Google email inbox.

The three superheroes use their words, not violence, as a means to solve crimes against women. They’re saving the world not from CGI alien invasions but from daily sexism we women get to enjoy, be it revoking a woman’s feminist badge for allowing her preconceived gender constructs to determine who can and can’t use a bathroom, or stopping a peeping tom from, well, doing what he does best. Their greatest foe is yet to come and teased at the end of the comic: the Meninists, a more ridiculous thing than fighting crime in a catsuit.

The Feminist Superheroes is an inspired commentary on the state of women in comics as well as women in the real world. Black Widow and Wonder Woman are not making special guest appearances in this series. What’s a little mind boggling is this part of life has not already been imitating by art. X-Men is notable for drawing inspiration from the Civil Rights Movement with its depiction of the hatred mankind harbors against those with mutant abilities, so it’s not like everything Marvel does is the stuff of fantasy. They just choose to ignore some things. It’s great someone is poking fun at the absurdity.

Visually, the simple style of the artwork works greatly with comic’s theme. It’s not flashy; these three ladies are prancing around in their ‘F’ stamped outwear spreading social education to people who could stand to take a class or two. The female superheroes don’t even have boobs drawn in. It’s really more about their speech bubbles than what they themselves look like. I’m not sure what that says about me for noticing that, though.

The comic as a whole operates in fragmented sections of various black-and-white problems where it’s easy to be on the superheroes side. It’s be interesting, after of course they fight the Meninists, if their encounters with feminist wrong-doers was more in depth, with more verbal sparing. Someone commits a social crime, the feminists swoop in, say their piece, then shout their team name as a victory for women everywhere. Problem solved? Apparently, because it’s not revisited. Also, all the insight the reader has to these three women is that one is a lesbian, one would prefer to be single than with a man who makes feminism about himself and one prefers the company of her cat. Their drawn to be indistinguishable from one another. Their faceless identities are more of a statement rather than actual characters.

The Feminist Superheroes don’t have flashy gadgets or any known mutant superhuman abilities. Who knows, maybe in their next issue fight with the Meninists, one of them discovers they can shoot lasers from their eyes, but that’s unlikely. The main message driving Carrus’ comic is that anyone can be a feminist superhero. All it takes is speaking up against crimes against women when it happens right in front of your face. The cape is optional.

Have you experienced The Feminist Superheroes and are donning your gender-neutral ‘F’ sweater? Check out Silvia Carrus’ work, and sound off in the comments or send us your thoughts on Twitter!