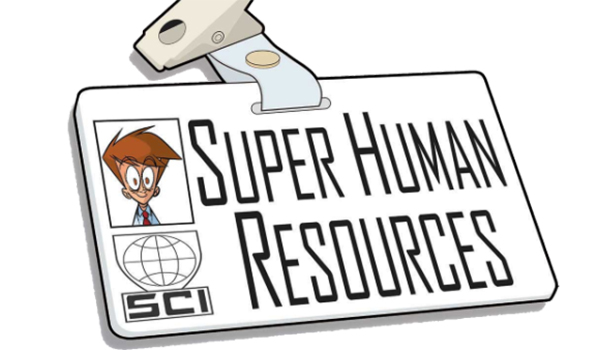 In a time where superhero comics are often so much about the the punches and the powers, it is the ultimate refresher when comics can be just that, comic. Ken Marcus‘ Super Human Resources is just that, a superhero story that looks at the lighter side of being a superhero.

Released back in 2009, Super Human Resources tells the story of normal-guy Tim, a worker from a temp agency sent to work in the human resources of Super Crises International (SCI), an incorporated superhero company (think if the Marvel Universe’s Superhuman Registration Act went over well). While initially intimidated by the powerful super beings working beside him, Tim soon finds that working in a superhero office is just like working in any other office: terribly mundane (but with few quirks here and there). Tim spends his time at SCI learning the ropes of the corporate superhero world, as well making some friends in the process.

Like a mix of The Office and Marvel’s Agents of S.H.I.E.L.D., Super Human Resources is charming and often hilarious, and features a large, vibrant cast of characters. Besides the temp Tim, there is Zombor, the zombie receptionist; The Wombat, a Batman-esque creep superhero; Manboto 3.4, a womanizing robot; and that is only a small fraction of all the characters that grace the pages. Each one of them is given some depth and page time, and, in most cases, I never felt that the characters were just put in for a cheap laugh.

The strong point of these comics is definitely their humor and for anyone looking for laughs above all should pick up this series. However, one should be warned that some the humor is a bit time-specific (remember, this comic came out in 2009), so I hope you still think jokes about Clay Aiken and Creed are funny. Besides those few jokes though, there are many laughs you will get from these pages no matter what year you are reading it.

There is a story line that ties together the 4 issues of this “season” of comics, but honestly, it is the least appealing part overall. This comic shines when we are viewing the mundane aspects of office life that just happened to be occupied by superheroes, freaks, sentient printers, and menacing suits from corporate. From Secret Santa to sexual harassment seminars to office parties, all these events come to hilarious life with each frame. Conversely, when there is a true (i.e. with a villain) conflict that comes about for the SCI, the story seems to come to a complete halt and I couldn’t help but yearn for the more mundane aspects of SCI life. This is doubly proven when the final resolution of the larger conflict is solved by what is almost a “deus ex machina” that seems only to serve as a means to an end.

Justin Bleep‘s artwork perfectly suits the story with its sharp, crisp character lines and bright colors. Everything is big and bold, and each character’s personalities come to life with Bleep’s sharp animating.

Super Human Resources is a refreshing and hilarious breeze of a story that truly jumped off the page, and I’m surprised this idea of an incorporated superhero office hasn’t taken off in another medium (be it an animated cartoon or a live-action series). Until that happens, I’ll keep waiting for Season 2.

Have you read Super Human Resources? What did you make of it? Let us know in the comments section or send us a Tweet!