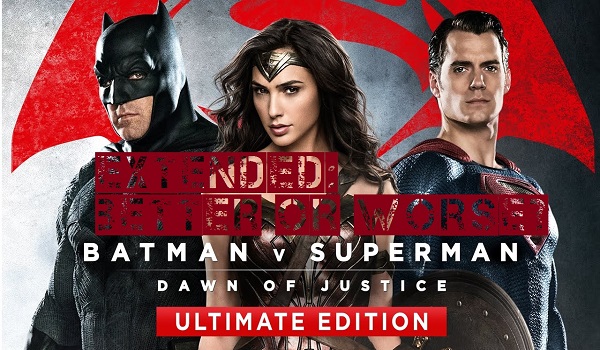 Recently we had the release of Batman v Superman: Dawn of Justice Ultimate Edition which had an extended 30 minutes of content not seen within the Theatrical Version. With its cinema release being torn to shreds by critics and fans alike, it makes me wonder whether or not the Ultimate Edition, the intended version of the DC film, might have been better shown first. After all, many did complain that the over-stuffed, over complicated narrative was extremely confusing to watch but had they have watched the Ultimate Edition these questions may have been addressed and the overall narrative may have made more sense.

So I ask the question: Are Extended Editions better? And if so, should they be the definitive versions of films in the future?

There are many films out there that have an Extended Edition and I usually go out of my way to watch these versions so that I can see what was cut out of the original version. Then again, sometimes I just go straight for the Extended Version. Why? Because I feel this is the version I’m meant to watch. I want to watch the version that has all the juicy bits that were cut out of the Theatrical Version. Usually the film in question is better. We get better pacing, more character development and most importantly, a better understanding of the plot.

Dawn of Justice is a great example of a film that needed you to watch its Ultimate Edition because this was the version that should’ve been shown in the cinema because it has all the important plot threads returned and allows for a better, more understanding experience. Now with me I actually understood the narrative (most notably Lex Luther’s schemes) perfectly when I first watched the film in the cinema. So naturally the Ultimate Edition didn’t really make much of a difference for me, but it was very clear that the narrative was spread out further and only enhanced the information to a better understanding, which I felt made my second viewing even greater.

Another film that I like to use in the example of “which version is better” is Alien 3. This film’s Theatrical Version has so much content cut out, it’s actually unbelievable. Watching the Extended Edition is like watching a completely different cut, especially in the second act where you can see where the Theatrical Version was heavily re-edited. Personally I love the Extended Edition and always watch this version of the film. One element I like more is Paul McGann‘s character, Golic, who simply disappears from the plot within the original version of the film. In the Extended Edition we see what happens to him, and it is very interesting, especially how it ties into the re-established second act where Ripley’s plan of trapping the Alien actually works. Golic completely loses it as he begins to worship the Alien and ultimately commits murder for it before releasing it, and ends up being killed by his so-called master.

A great example within my DVD collection comes with Alien vs. Predator: Requiem where my copy only comes with the Extended Edition, meaning I have no choice but to watch the film how it was originally intended. To me that is how it should be. We should be allowed to see the uncut version of film’s in all their glory, how they were meant to be and not the watered down version that Studios want to release due to preferred feature length, certificate or simple worries. How many times have we gone into the Special Features menu and watched all the “deleted scenes” and wondered “why weren’t they included in the actual film” either because the deleted content would’ve made the scene make more sense or because the deleted content was amazing and was tragically wasted by being removed or unfinished.

I’m not saying all deleted content is good content. Sometimes there are good reasons why they were taken out and ultimately the film is better without it. But most of the time we have to wonder how much better a film could be if it hadn’t been altered and cut down. Suicide Squad, another new DC entry, is another victimised film that was changed for the sake of getting the tone right for the critics (which ultimately still didn’t work). The film was amazing, don’t get me wrong, but you can tell it wasn’t quite there in terms of structure because you know it was juggled around in order to create a brand new version of the film suitable for DCs new image.

The biggest sacrifice of the film is the differences in tone and style throughout the narrative and of course the almost complete absence of The Joker. So much was riding on seeing Jared Leto‘s Joker, and how his extreme method acting paid off but we barely got to see him in action due to the dramatic cuts in his scenes, with a lot of apparent dark content that showcased his madness never to be seen. I can see the DC Extended Universe having a running trait of having Ultimate Cuts for all their films at the rate we’re going (and in the case of Suicide Squad I hope we get one because I really want to see that deleted Joker content within the rest of the film and not just as a crappy bonus feature).

It’s fair to say that films can be ruined when we know that good content is missing. To answer the question, yes, I do believe Extended Versions are better (at least for the most part). Do I think Extended Versions should be the main version of all films: yes and no. I suppose it depends what has been cut out. If it isn’t important, like some of the scenes from the Extended Versions of The Lord of the Rings, then don’t add it back in. But fundamentally you should have the option to watch the Extended Version. They shouldn’t just be restricted to Special Editions or Blu-Ray, everyone should get the chance to view both versions of the film and make up their own mind which is the definitive version. Granted some people won’t want to sit through longer versions of film’s and that’s understandable. But you can’t deny that you get an overall better experience with a longer, more immersive cut of a film, see The Lord of the Rings, Aliens, and Terminator 2: Judgement Day.

So yeah! That’s my opinion on whether or not Extended Versions are better. I definitely believe all films should come with both versions, or just the Extended Version if that is naturally better from the start. No good juicy content should be kept from us, especially if it will dampen the experience and give us less than what we were promised in promotional material (Suicide Squad, tut tut!) Anyway, enough with my usual rants, tell me your thoughts on this particular Case Study. Do you agree or disagree? As always sound off in either the comment section below or on our Twitter page!