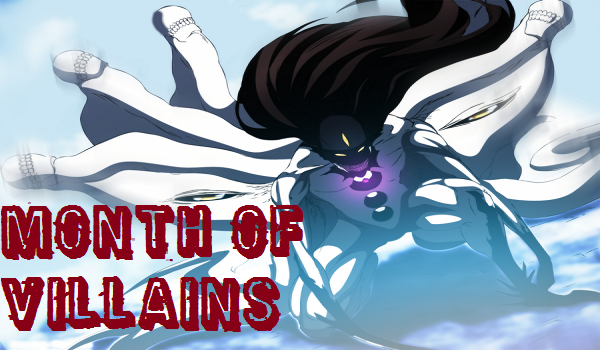 With this month spilling out the very first super-villains movie, Suicide Squad, along with the bleak Batman tale The Killing Joke which explores the madness of The Joker, I thought it would be interesting to do something a little different. I thought to myself: what can I do to celebrate such a special occasion? Then the thought hit me, whilst listening to “The Master Vainglorious”, why don’t I establish the Month of Villains and create some articles based around villains and help to explore why we enjoy them so much. So join me on this journey as we delve into the opposite end of the spectrum. Continuing this great occasion let us countdown the Top 6 Hero/Villain rivalries.

6. Sonic the Hedgehog vs. Dr. Eggman 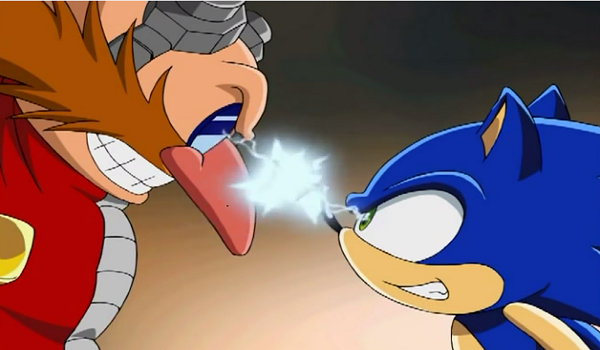 Sonic the Hedgehog!! I loved this video game as a kid and still do to this day. He’s a great character filled with plenty of spark and with him comes Dr. Eggman (or Robotnik as he was originally known). These two have shared an onscreen rivalry since 1991 which has spanned across multiple video games, television shows and comics. What is interesting about these different variations is the different takes on theses characters, with some versions being more comical while others go for an extremely gritty approach (with Sonic SATAM making the darkest adaption of Eggman to date).

Fundamentally, their story is the same with Eggman attempting to build his Eggman-Empire through the population of Sonic’s world being turned into his robotic slaves whilst Sonic, and his friends, attempt to prevent this. Eggman has gone to different lengths through this rivalry to take over the world, through creating his infamous Death Egg Robot, using his grandfather’s space-station, the Ark, to hold the Earth at ransom, trying to control the power of Chaos, to actually trying to erase Sonic from the fabrics of time. Sonic of course with his cool attitude and relentless wise-cracks constantly puts a spanner in the works and foils Eggman’s plans, usually humiliating him and causing the mad scientist to feel even more rage against the blue hedgehog. 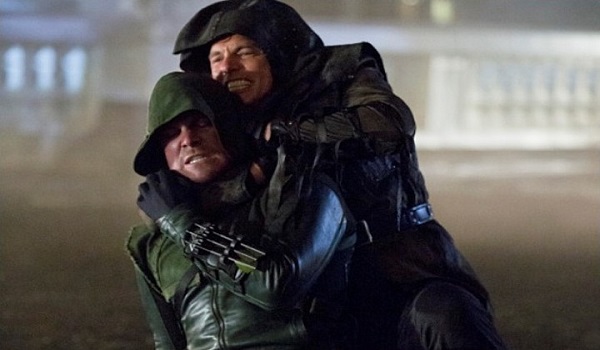 I freaking love Arrow and one of the elements I love the most is the complicated story between Oliver Queen and Malcolm Merlyn. The problem is that both of these characters are doing bad things in order to perform good acts but you have to wonder whether they are truly justified. In Oliver’s defence his acts do become more noble as the series goes on and eventually becomes the Green Arrow. Whereas Malcolm never really gets to a point where his actions are justified because they are too despicable. His attempts to level an entire section of Star City in order to rid it off the filth of society showcase that he’s insane and has lost the plot somewhat but at the same time he retains a calm, calculative and influential figure.

What makes the rivalry more complicated is the reveal that Oliver’s sister, Thea, is in fact Malcolm’s daughter. This makes Oliver question killing Malcolm because he doesn’t want to leave Thea without a father, despite her resentment of him due to his constant evil deeds. His actions are questionable considering Malcolm played a long game with Oliver through using Thea to provoke the wrath of Ra’s al Ghul in order for Oliver to eventually kill the Demon Head just so Malcolm could become the new leader of the League of Assassins. There are many threads that bine the two characters together, making their relationship extremely personal, which is why I have enjoyed watching it evolve over the series. This has been aided by the fantastic performances from both Stephen Amell and John Barrowman. 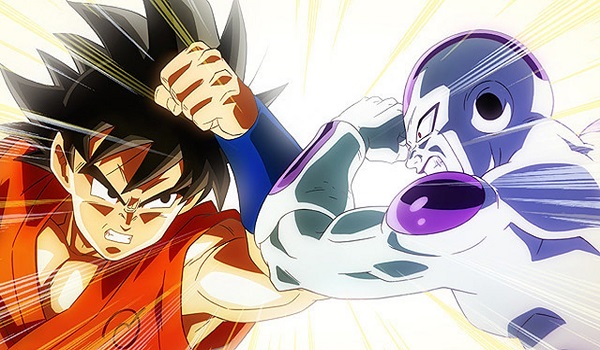 When looking at the world of anime/manga almost everyone points to Dragonball Z because of its action, explosive battles and lovable characters. One of the main highlights of the show is the infamous rivalry between Goku and Frieza, to which even got a movie made about it (Resurrection-F). This was an interesting rivalry due to the fact that Frieza became a part of Goku’s mysterious backstory, to which the evil tyrant killed his race in order to prevent them from fulfilling a prophecy that could potentially destroy him,  leaving Goku one of the sole survivors of the Saiyans.

The battle between these two characters was epic, to say the least, and slowly built up into an explosive showdown after Goku attempted numerous times to bring Frieza down. After the death of his best friend, Krillin, Goku lost it and became the very entity that Frieza feared above all others: the Legendary Super Saiyan. In the end the battle took place on a dying planet as the too warriors battled it out in order to decide the fate of the universe, resulting in Frieza’s pride being utterly tarnished by Goku’s superiority. Frieza ultimately was defeated by his own rage as he attempted to prevent his defeat at the hands of a Saiyan and was cut down by his own attack before being finished off by Goku after the tyrant threw the protagonist’s generosity back in his face one time too many. 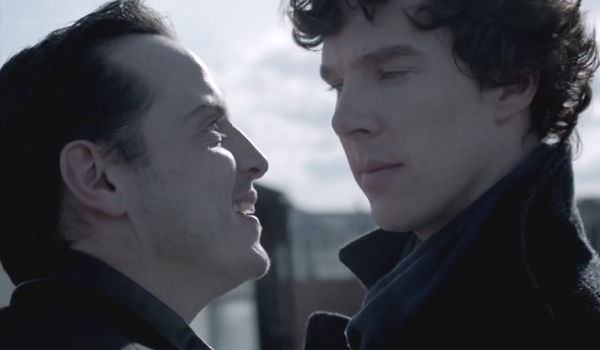 Originally I didn’t wish to add this rivalry to my list due to its similarities to my next entry, but what the hell, it’s a great rivalry and deserves a place on this list. The show Sherlock has the greatest interpretation of this powerful rivalry, portrayed to a teat by Benedict Cumberbatch and Andrew Scott. It always feels tense and personal as Moriarty constantly tests the limits of Sherlock’s intellect. Despite Charles Augustus Magnnussen proving to be too much for Sherlock to handle, due to him being the only villain in which got under his skin and led him to resort to violence because intellect would not work on him, Moriarty always remained his ultimate rival. Moriarty fascinated Sherlock just as much as Sherlock fascinated Moriarty.

In the end, however, Moriarty wished to bring an end to the long tormenting game by executing a scheme that would tarnish Sherlock’s reputation and ultimately force him to take his own life. Moriarty in fact goes as far as killing himself in order to insure Sherlock cannot escape his trap, but alas the great detective finds a way. They are a great rivalry because they are the same, but simply operate on the opposite spectrums. In many ways Moriarty was the only villain that was on the same level as Sherlock and came close to defeating him. Then of course there’s the question of what Moriarty has installed for Sherlock from beyond the grave (#CountingdowntoSherlockSeries4).

2. The Doctor vs. The Master 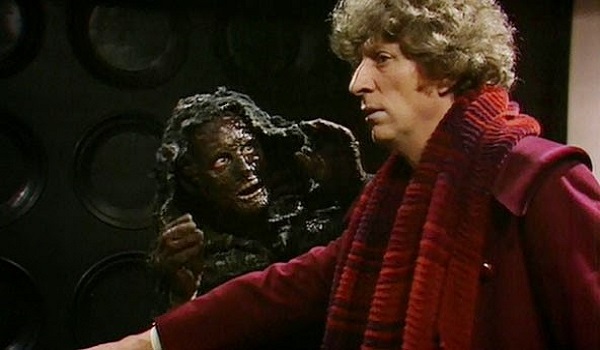 Again, like my last list, this pick was a close second. Doctor Who (if you didn’t know by now) is of course my favourite show and within it has one of the greatest rivalries of all time: The Doctor vs. The Master. The Master is a brilliant villain due to his quest for mastery over the universe, causing nothing but death and destruction along the way. The Doctor is the opposite and wishes to be more of a hero and live up to his title of “Doctor” by helping everyone he can from the clutches of evil across time and space. What makes the foundation of this rivalry all the more intricate is the fact they were once friends back on Gallifrey during their days at the Academy. This friendship died and they became bitter enemies as their paths went separate ways.

The Master ultimately ended up hating The Doctor, but at the same time admires him for his genius and characteristics. He also enjoys exploiting his different personas through their connected weakness of compassion. The Master will go to whatever lengths he sees fit in order to gain the victory over The Doctor and ultimately secure his plans for universal domination. There have been several moments in this rivalry where The Master has nearly won, or even caused The Doctor to regenerate, but fundamentally The Doctor always prevails and defeats his arch-nemesis, even going as far as forgiving The Master, something his enemy fears the most. 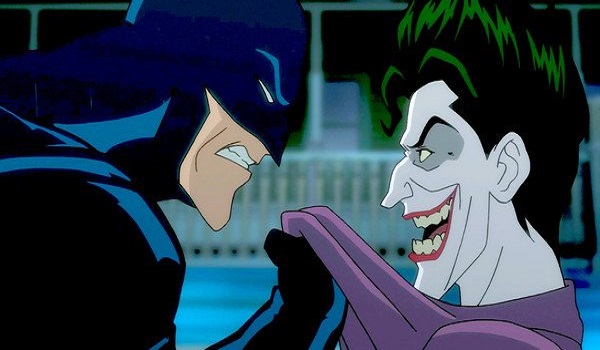 Despite The Doctor and The Master having a more personal, well-rounded, and in many ways, logical rivalry the rivalry between Batman and The Joker will always be the best. This is down to the fact that there is no connection between the two characters. One wishes to bring justice whilst the other wishes to deliver chaos. But because of this they share a common ground through wanting to understand each other. Though on the surface they want to complete their roles as hero and villain they both have a rather complex relationship. The Joker is very open about wanting Batman to see the world through his eyes, making him realise that he is no better than him and that deep down he is the real cause for the criminally insane within Gotham. This reflexes back on Batman as he questions this question and wonders whether his acts of vigilantism is justified.

The Joker in many ways holds the advantage in knowing Batman won’t kill him because the Caped Crusader follows his rules, to which Batman questions due to knowing that his rules cost him dearly by allowing The Joker the chance to repeat his rituals of causing death and destruction. Likewise The Joker won’t kill Batman because of his obsession with him, and that he is the reason behind his actions. The cruellest part about this rivalry is that they both know they would be lost without the other and in many ways need one another to continue their activities. But they both know that their long, suffering game can only end one way.

And there you have it, another count down revolving around the world of villainy. It was once again a tough call to pick my choices but it was a fun process all the same. I hope you are enjoying these articles and like the choices I have been making. But obviously this is only my opinion and you have the chance to share and discuss yours. Tell us your favourite hero/villain rivalry in the comments below or on our Twitter page!