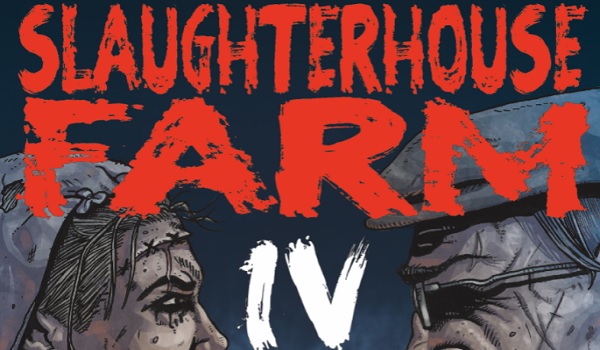 “What a refreshing change – a horror comic that is genuinely horrific” – Steve Tanner, Time Bomb Comics.

Four troubled teenagers are taken camping in Snowdonia by their social workers. However, a chance encounter with a deranged farmer leads to a horrific journey into terror. Who will survive…Slaughterhouse Farm?

Slaughterhouse Farm is a blood-soaked love letter to the grindhouse horror classics of the 70s and 80s. The horror of The Hills Have Eyes or The Texas Chainsaw Massacre relocated to the isolated mountains of North Wales. There is tongue in cheek humor and a mysterious plot to be uncovered – but this comic is still as nasty as hell, with decapitations, impalements and dismemberments to keep gore hounds satisfied.

The story begins with Frankie and Julian taking a minibus full of troubled teens for a weekend in Snowdonia – but horror is literally waiting ’round the bend in the twisted form of Pigf*cker!

Slaughterhouse Farm came out of the desire to give Wales its own bogeyman – a figure stalking the mountains and farmland of Snowdonia that could stand alongside Jason and Leatherface. Created by North Wales-based comic writer Matt Warner (Mandy and the Monster, Dawn After: Kiss Me Deadly) and horror critic A.J. Ballard, the series is inspired by the classic splatter films of the 70s and 80s set in the modern day with a dose of humor. Artist Afron Jones, who himself lives in Snowdonia, was recruited to the team after Matt and A.J. saw his cover art for North Wales produced horror film Zombies From Ireland. When Afron said he pictured Slaughterhouse Farm‘s killer as Universal actor Rondo Hatton painted by North Wales artist Sir Kyffin Williams, it was obvious he was a perfect fit for the project. The team was rounded off by letterer extraordinaire Nikke Foxrobot who has worked on dozens of small press comics, including Hellbound Media’s titles, and cover colorist Steven Denton (Dept. of Monsterology, Massacre for Boys).

The first three issues of Slaughterhouse Farm have proved very popular among both horror film fans and comic readers alike, becoming one of Hellbound Media‘s best-selling titles! We’re offering amazing rewards and the chance to pre-order the final issue, plus any previous ones you require to complete your collection. So please, support us and follow our heroes on a terrifying and blood-soaked decent into hell. These little piggies are going to wish they stayed home.