Home » PRESS RELEASE: A Song Of Mice And Fur On Kickstarter 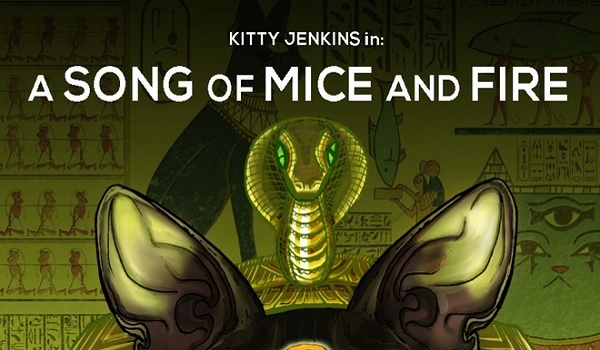 Set in the mythical realm of Nyania, A Song of Mice and Fur features dictator cats, red panda mercenaries and a sad fat pug, and promises to be one of the most epic and absurdist cat comics ever made.

Nyania is a land where cat and canine lords hold a precarious peace over their mousey subjects – and it’s at war! After a surprise Meowgol attack, the world is plunged into chaos and its denizens must fight tooth, nail and claw to come out on top. The comic is inspired by de Sosa’s passion for history, fantasy literature and real time strategy games.

A Song of Mice and Fur is the third book in the psychedelic Kitty Jenkins series, which has been described by critics as “Garfield for Buddhists via 60s counter-culture and Alt-Comix.” The story works as a stand-alone book and can be enjoyed even if you’ve never read another Kitty Jenkins comic before. Every page is rendered full color in de Sosa’s unique psychedelic combination of lush water color and digital art.

If you like ancient and medieval history, cute animals, and as many cheesy cat puns as possible, this is the comic for you!

To learn more about supporting A Song of Mice and Fur‘s $1,000 campaign, go to: www.kickstarter.com/a-song-of-mice-and-fur