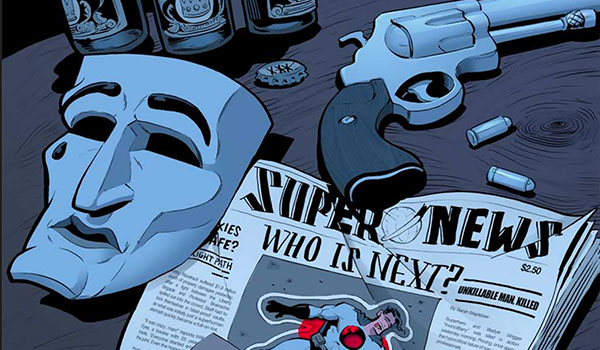 The art of comedy is a difficult one, and creating a parody/satire is even more difficult. Yet Turncoat by Ryan O’Sullivan, manages to do this splendidly with its twists on the superhero genre.

Turncoat follows Bernard, an assassin who works for an organization that kills off up and coming superheroes before they can become famous. However, things get a little complicated when Sharon, Bernard’s ex-wife, goes on a streak of taking out Bernard’s hits before he does. And things get even more complicated when someone puts in a hit for the most famous superheroes: The Liberty Brigade.

This series is filled with comedic gold. The characters all have their moments to shine in the comedic spotlight. Bernard’s perception of life is absurdly funny and continues to build throughout the whole piece. There’s also plenty of action, blood, and gore, most of which follows the dark comedy style of the series. The Liberty Brigade is the perfect parody of The Justice League right down to each member’s role throughout the story.

The artwork, by Plaid Klaus, is on point throughout. Specifically, Bernard’s character design perfectly defines his character with his receding hairline, small potbelly, and overall frail appearance. Members of The Liberty Brigade are close enough to who they are satirizing but also have a unique look of their own to give them a sense of individuality. 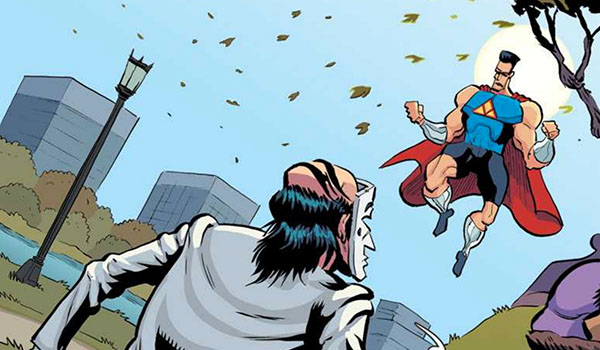 While Turncoat relies heavily on its dark comedy, the story surprisingly has a lot of heart. Despite being a loser in every sense of the term, Bernard is a very sympathetic character throughout the entire story. While not all the characters are given nearly as much development as Bernard, there are so many complexities to each character that it’s hard to not stand by them.

The ending of the series is also great. Everything comes fully circle without the events seeming too sappy. There’s a very fine balance between a happy ending and a bittersweet one. Additionally, the twist at the end also works really well with the overall characterization and tone of the piece.

In short, Turncoat is definitely a must read. While it is primarily a comedy, the characters have a lot of heart. You really want to root for these characters even if they do questionable things throughout the story. It’s a great, fun, and quick read.

You can currently read Turncoat on the official website at no charge! But, if you really like what you’ve read, you can also purchase a nifty hardcover copy. Get yours today!

Already read Turncoat? Share your thoughts in the comments below or onTwitter!