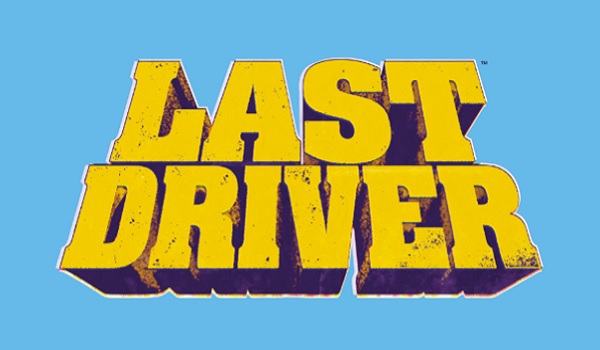 Hey gang! You may have noticed that there is a whole lot happening this month on the independent, creator owned side of comics, and we really love that sort of thing over here at AP2HYC. There has been no shortage of exciting announcements and excellent upcoming titles to talk about, and so yours truly has had to try very hard to remain calm. However, you may have gathered by now that I’m on the excitable (READ: insane) side, and delving into a book like C.S. Baker‘s Last Driver has pretty much driven (see what I did there?) me right back over the edge into sweet, sweet madness. So then, let’s get crazy and take a spoiler-free look at Last Driver!

Meet Frank Sudden, a man who effortlessly struts through the wastelands of a post-apocalyptic, giant monster infested world. Before the giant monsters attacked and destroyed pretty much everything, Frank was unhappy with his life of mediocrity and so he seems to have found his niche in the maelstrom of all the chaos and destruction. Personal opinion? He fits like a glove. Frank’s reaction to the end of the world is something to behold; we’ve all had that moment at a job we might not like too much, where we might hope for anything to happen so we can leave even a few minutes early. That’s pretty much what Frank does. He shrugs, leaves his coworkers to be torn asunder by a gigantic dino-monster-thing, and casually walks off. Oh, and he steals his boss’ sweet vintage Corvette.

Get used to hearing me say I really like this book. No, scratch that. I love this book. It’s awesome. Quasi-sentences aside, Last Driver is absolutely full of adult themes and situations, violence, language, beer, and just about everything else that should be kept from the eyes and minds of younger readers, so uh…don’t let them read it, okay? This becomes apparent even in the opening panels, as Frank plans his day of drinking beer, smoking cigarettes, and reading some…magazines. Right off the bat I knew this book was way out there, and it’s great. 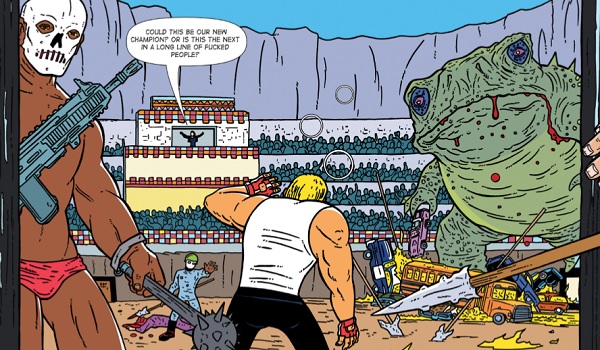 Once we get a little background on good ol’ Frank Sudden and what he’s all about, we’re thrust into the world of Last Driver. When Frank is captured and forced to battle in a death arena by the evil Chester (great name), whispers of the prophecy of the “last driver” circulate among the other prisoners. Apparently Frank is more than just a gun-toting, beer-guzzling, wise-cracking cool dude, and his appearance at Chester’s little fun factory is more than just by chance.

Last Driver does enough to separate itself from other stories of its kind like Mad Max, and I think this is mostly due to its delivery. Shaky Kane‘s artwork is tremendous and really provides the book with an incredible amount of character and flair. The monster designs are almost like something you would see out of a 1950s B movie, and it’s great. I cannot stress enough just how aesthetically pleasing Last Driver is and if you are one of those people who buy comics more so for their art, this is right up your alley.

The cover art was done by Juan José Ryp and Boo Cook (colors), and it’s got that sort of grindhouse feel to it. Complete with big guns, a muscle car, dinosaurs, and a bloody chainsaw-wielding vixen, it’s everything this book is – before you even get it open. Here, have a gander: 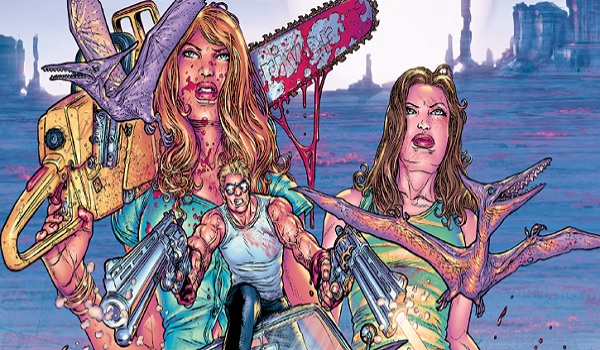 Of course I must also mention C.S. Baker’s script for Last Driver, which is impeccable. It’s got a ton of energy, it’s constantly hilarious, and Frank Sudden is a creation of genius. Frank narrates much of the story and he somehow manages to be a combination of 1980s action hero and post-apocalyptic philosopher, which is entertaining to no end. I found myself thinking “that makes total sense” to a lot of the things Frank says throughout the book, and I’m not sure if that’s a good thing or a bad thing, but it feels oh so right. There’s a moment where Frank pulls out a grenade to save himself from certain doom, and he laments that he was saving said grenade for his fishing trip. I always say dynamite fishing is real fishing, so once again I’m with Frank on that one (statement regarding dynamite and fishing not 100% accurate).

Did I mention that I’m crazy about this book? No seriously, I can’t stop reading it. I want more. Lots more. Frank Sudden; all day, every day. It’s no surprise whatsoever that the Kickstarter is blowing up at the moment, and it’s a safe bet we’ll be getting this book real soon, which only just means there’s probably lots more Last Driver in our future. Thank the gods (writer transparently denies pagan practices).

Before closing, I would like to offer a personal sort of “take away” moment; special, just for you (yes, you!). In the book’s closing pages, C.S. Baker reminds us that Frank Sudden lives his life “fast and loose,” and being a huge Motörhead fan, I couldn’t fathom a more fitting sound to go along with this book. Perfection. Okay, have one more picture. 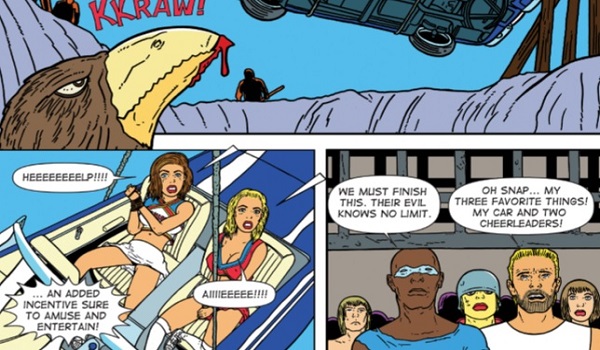 Oh Frank, can we please be best friends?

For more information about Last Driver visit the Dead Canary Comics website, where you can also learn about some of their other publications. Then, take the “ye olde” internet stroll right on down to the official Kickstarter campaign and get some of those totally badass (like Frank Sudden) rewards.

Will you be getting your copy of Last Driver? Share your thoughts on all things Frank Sudden in the comments section and on our Twitter page!