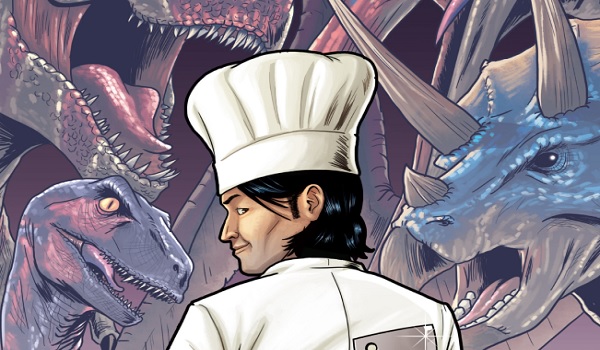 September is coming to an end and what a month this has been. A plethora of great, new and upcoming comics has been bestowed upon us by the gods of sequential art (still not a Pagan). You may have caught our recent interview with the creative team behind Voracious and the upcoming Voracious: Feeding Time but if you haven’t, you can check it out here. Then once you’ve absorbed the large quantity of letters, words, punctuation marks and sentences contained within, feast your eyes upon our review of the first four issues of Voracious! …which is…just below, of course. Slight spoilers ahead!

Ever wondered what our prehistoric friends the dinosaurs would taste like? You bet you did! Well, Markisan Naso, Jason Muhr and Andrei Tabacaru have gone ahead and given us the next best thing: a comic series about people who eat dinosaurs! Actually, Voracious is about a lot more than just that, but you can be sure there’s lots of dino-dishes being served up in the first four issues.

Meet Nate Willner, a young man who had everything going for him: a chef apprenticeship at one of New York City’s premiere restaurants, a caring girlfriend and sister, easy access to some of the most rocking venues in the entire world, and…probably a lot more cool stuff. You get the point. It all seemed to be coming together for Nate until one day when an explosion left his life in ruin. Feeling completely lost and alone, Nate moves back to his hometown of Blackfossil, Utah (appropriate hometown name, amirite?) where he regresses back into his teenage life; returning to work at the very same cafe he once did.

When things seem like they’ve hit their lowest point, Nate receives a phone call that will change his life forever. It turns out his Uncle Tony passed away and left Nate a truck load of cash money and a mysterious house in the mountains. This comes as a surprise to Nate as he barely knew his Uncle Tony, but that’s not where the surprises end! That’s right friends, Nate also discovers a laboratory in the basement of his new mountain home, complete with time traveling scuba suit. Capital! 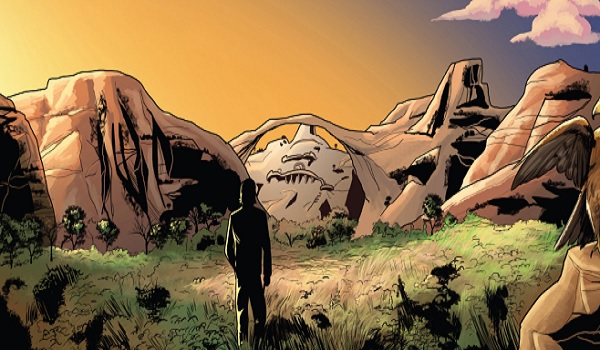 When Nate decides to give the time travel suit a whirl, he finds himself transported back to the Cretaceous period and the lost land of the dinosaurs! While undoubtedly awesome, we must all remember what happened in Jurassic Park and that all dinosaurs are vicious, man-eating killers. Because of this, Nate is forced to protect himself against their prehistoric bloodlust and implements one of the suit’s defensive functions: a sweet flamethrower! Nate then goes into survival mode and decides to eat some of the charred dino-flesh; turns out it’s delicious! This gives Nate the idea to start transporting dinosaur meat back to his own time and serving it at the cafe!

Unbeknownst to the cafe’s patrons they are being served all manner of dinosaur-infused meals, much to their delight. The entire operation leads to Nate regaining his senses and deciding to open his very own restaurant with the money that was left to him by his Uncle Tony. Named after his late sister, Nate’s new restaurant is called “Sara’s Fork and Fossil.”

The cast of characters in Voracious is varied and interesting. During the course of these first four issues we get a fair amount of flashbacks that help to flesh out Uncle Tony’s mysterious past as well as his connection to Nate’s eccentric grandmother, Maribel. Grandma Maribel manages to be one of the more intriguing characters throughout, with new questions surrounding her in each new issue. Nate’s partner Starlee Parker (who has a secret crush on him, but I’m totally not jealous tee hee) provides some comic relief and the interactions between her and Nate are some of Markisan Naso’s best written moments in Voracious.

When family friend “Captain” Jim accidentally discovers Nate’s big secret, he uses his military expertise to improve the time travel suit and aids Nate in his hunts, becoming a sidekick of sorts. Then there’s Starlee’s brother, the sheriff of Blackfossil, who undertakes an investigation into the Fork and Fossil when he starts to realize that not everything is adding up. 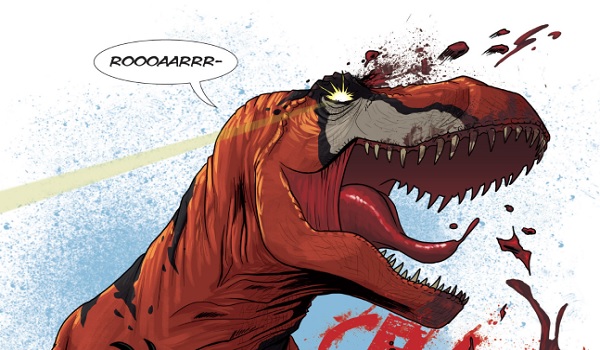 Of course then there are the true stars of the show: the dinosaurs themselves. Artist Jason Muhr and colorist Andrei Tabacaru do an excellent job in this book. Dinosaurs aside, everything is incredibly well drawn and the colors are vibrant and pleasing to look at. But man, those dinosaurs though; absolutely spectacular. It’s easy to see that everything about Voracious is professional grade work, from the script to the artwork. I can’t say enough about how polished everything really is, and you’d be doing yourself a disservice by not checking it out. If I had to make one complaint about this book it is that there is a fair amount of dinosaur murder in it, and I’m not sure how I feel about that being a lover of those prehistoric rascals. But that’s my only complaint.

These first four issues give us the rundown on how Nate turns his life around, while also raising questions about Grandma Maribel and Uncle Tony’s past. There are a couple pretty big reveals that will effect the story in a big way in the upcoming sequel series Voracious: Feeding Time, but you’ll just have to go out and pick up these four issues to find out what those reveals actually are (yeah, it’s like that).

For more Voracious action visit Action Lab’s (so much action in this sentence) website, where you can purchase your very own copies of the first four issues. Then, get on that old virtual bicycle of yours and ride on down to the official Kickstarter campaign for the upcoming second series and show your support. As usual, there are some sweet, sweet rewards you can pick up in the process (plus dinosaurs).

What did you think of the first story arc in Voracious? Will you be supporting Feeding Time on Kickstarter? Let us know in the comments section and on our Twitter!