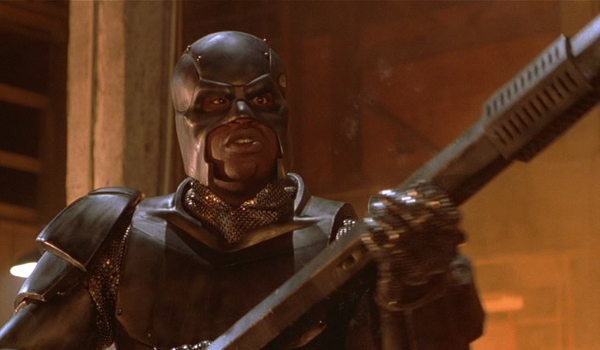 The popularity and success of superhero films has had its ups and downs. In the mid-90s, the genre was declining, falling into cheese-infested cliché messes like Batman & Robin and Judge Dredd. But one film has been described as the death knell of the genre: Steel. Based on the DC Comics superhero, the film was made to try and establish John Henry Steel as both his own character and as a role model, at least in the eyes of the film’s producer, Quincy Jones, who described Steel as not a superhero but more of a “super human being”. What’s the difference? But the film itself is just another victim of poor writing, clichés, and lousy acting, with the cast led by Shaquille O’Neal, the world’s most wooden actor since Keanu Reeves.

The film’s choice of director was Kenneth Johnson, who was completely uninterested in directing a superhero movie, turning opportunities to direct takes on The Bionic Woman and the 1970s The Incredible Hulk show. However, Steel caught his attention, describing him as a “blue collar Batman”. So he completely chucked out everything from Steel’s comics and made a completely new origin story. In the comics, Steel was an ally to Superman who tried to help him defeat Doomsday, only to be knocked out and Superman to be killed. He rose again and decided to become a superhero in memory of the Man of Steel…by becoming the literal man of steel.

In the film, Steel is a soldier and weapons designer who built an impressive sound cannon, aided by his partner Susan “Sparky” Sparks (Annabeth Gish). During a demonstration to a US Senator, a soldier named Burke (Judd Nelson) who goes to great lengths to prove he is an asshole, pushes the weapon up to eleven and causes mass destruction. The Senator gets killed and Sparky’s legs are crushed by rubble. Burke is dismissed from the military, but takes Steel’s weapon designs to a criminal named Big Willy (*snorts*), who runs a video game company to finance his R&D projects. So, the army didn’t confiscate the designs or imprison Burke for reckless endangerment?

Anyway, Steel returns home to his soufflé-obsessed grandma, and cousin who speaks entirely in lingo. Burke sells the new weapons to street gangs who loudly rob banks using lasers and the sound cannon. Determined to stop them, Steel retrieves the wheelchair-bound Sparky from a retirement home, and decides to become a superhero using their own weapons, aided by his Uncle Joe, played by noneother than Richard Roundtree, aka, Shaft! Who is the man whose career just went down the pan? Shaft! Right on!

So, dressed in the silliest looking armour he could make in a montage nine years before Iron Man did it, Steel takes to the streets to fight crime. At least the costume suits Shaq, matching perfectly with its stiff mobility to his acting. And it might just be me, but everything about Shaq’s costume is stolen from somewhere else – he looks like a mix of Batman and Iron Man, he stole Thor’s hammer but also turned it into a gun, has some of James Bond’s tech, and possibly harvested both Inspector Gadget and Bionic Commando’s gizmos as well.  And he moves as quickly as C-3PO on a people mover. In short, the costume looks very cheap and tacky.

Shaquille O’Neal really is a terrible actor, delivering lines as flat as possible or like he is in a TV ad. Surely there were other seven-foot tall African-American actors they could’ve picked. Shaft spends every waking moment reminding the audience he was in better things, and Judd Nelson’s acting is somewhere between “Can’t be bothered to ham it up” and “God, why did I sign up for this movie?” The film’s only real saving grace is Annabeth Gish’s performance. I particularly like the scene where Sparky falls out of her wheelchair and fights to regain control of both her body and her life. Of course, later on she turns her chair into a badass missile-launching weapon.

The film is just full of clichés after clichés. You have the do-gooder hero, generic evil businessmen, the tech wizard (three of them), everyone knows Steel’s identity despite the attempts to hide it, there is a semi-tragic backstory, the training montage, and even the god awful one-liners, which just don’t work when Shaq is the one saying them.

However, the one thing that the film manages to avoid is the cliché romance. Despite obvious chemistry and attraction between Steel and Sparky, they don’t get together and remain close friends. Back to bashing Shaq, despite his physical presence onscreen, he is also very slow despite being a former grade-a basketball player. There is a lengthy chase scene where Shaq is being outrun by some teenage punk, and the seven-foot giant is having difficulty walking over railway tracks.

There are loads of others issues like stupid plotholes, the cheese factor is off the scale, and the strange focus on Steel’s grandma determined to make the perfect soufflé and she requires people to whisper so her cooking doesn’t set too early. The film also makes vocal nods to other better superheroes, or just Batman and Superman since they were the only superheroes both known to audiences and having formerly successful film franchises. The actors also visibly cringe and glare at whoever is making the references.

And yet Steel is surprisingly enjoyable, but strictly as a funny film to waste time and laugh at. Shaq is a rubbish actor so it is quite funny trying to see him emote and do a serious role with all the finesse of a plank of wood. The key issue with Steel apart from all of the above is that it decided to adapt a superhero by removing everything connected to the comics. Why then bother? Change the name and alter the costume to avoid a lawsuit, and you would’ve had an original superhero film that may have been looked on more fondly in later years. Now, if Steel is to appear in the DC Extended Universe, let’s hope they don’t contact Shaquille to reprise his role.

Have you seen Steel and what are your thoughts on it? Should Shaquille O’Neal stay away from films? Leave a comment below or on our Twitter feed.