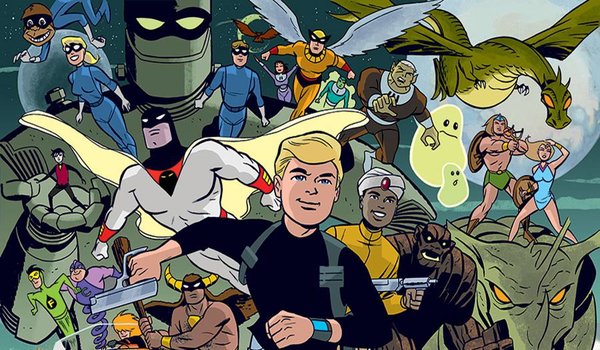 And now for something completely different. Over the next two years, the cinematic universe genre (if you can call it that) looks to explode. Marvel and DC Comics are the only two successful ones so far, or at least on a financial level for the latter, and during 2016, we have heard several film studios announce their goal to join the fun with their own shared film universes. The Universal Monsters are set to make a comeback in 2017, Hasbro plot to turn Transformers into this and make a second one with all of the franchises no one remembers, and then there is the subject for this article: Hanna-Barbera. Yes, the former animation studio that gave such beloved cartoons like Scooby-Doo, The Flintstone, and Wacky Races is making plans to create an animated film series. But how would this work, and would such properties succeed as a more serious franchise?

Hanna-Barbera was founded in 1957 by former MGM animators William Hanna and Joseph Barbera. They had earned fame with the creation of good old Tom and Jerry in 1940, and the only way forward was up. During the 1950s to 1970s, the studio produced a string of successful and popular animated series including Huckleberry Hound, Yogi Bear, The Flintstones, Scooby-Doo, Top Cat, and The Jetsons. Hanna-Barbera is a studio who pioneered many types of animated shows, inspired the creation of The Simpsons, and spawned many slapstick sitcoms and endless mystery-solving teen comedies. Nowadays, Hanna-Barbera is an in-name only subsidiary of Warner Bros., with their beloved characters zombified in dreadful live-action movies.

But, we will be getting the first of Hanna-Barbera’s new movies in 2018 with S.C.O.O.B., implied to be a more modern take on Scooby-Doo. However, there was also the mention that Mystery, Inc. work for a larger organisation. Presumably, this is a starter point for connecting the dots on the giant Hanna-Barbera cinematic universe wall chart likely drawn up by corporate lawyers. But how could all of this intermix? Well, characters from the various cartoons would pop up in each other’s shows all the time, so there would be little trouble getting the gang together. But what about the stories, the universe, and characters themselves? Could the same level of characterisation seen in say Captain America: Civil War be replicated here?

Well, by happenstance, earlier this year, DC Comics were kind enough to offer us imaginative remakes of several Hanna-Barbera properties in the form of several comic books. Scooby-Doo becomes Scooby Apocalypse spearheaded by veteran artist/writer Jim Lee, set in a post-apocalyptic world where the meddling kids are hi-tech monster hunters. There is Future Quest, based around kid hero Jonny Quest crossing paths with the studio’s other major action heroes like Space Ghost, the Herculoids, and Birdman (not that Birdman). Wacky Races is getting an awesome-looking, apocalyptic reimagining clearly inspired by Mad Max: Fury Road. And The Flintstones seems to be the same but with a more realistic art style.

So, how could all of this fit together. Simple. Mad Max it! These comics mostly rely on a post-apocalyptic setting, so why not incorporate that with all of Hanna-Barbera’s properties. A major explanation for the wild variety of characters and settings could be the class system in a post-apocalyptic world. On the ground level, or Mad Max-esque style badlands, The Flintstones could be bottom of the barrel in terms of class, and the dinosaurs being mutated giant lizards. Captain Caveman automatically makes an appearance in The Flintstones’ movie before getting his own. Wacky Races could also fall into this setting as based on the new comics, offering an exciting Fury Road-style movie with a more darker take on iconic characters like Dick Dastardly, Penelope Pitstop, and the Ant Hill Mob.

Opposite that would be a hi-tech domed city, where we could easily slot in The Jetsons, the personification of the 1960s futuristic utopia seen in Tomorrowland. This could also explain where Mystery, Inc. get their groovy gadgets as seen in Scooby Apocalypse. As said before, the gang now hunt monsters professionally after an experiment went wrong, which could have been a decisive factor to the Apocalypse. This could also explain why animals can talk and are anthropomorphic, due to evolution or mutation.

Now, apparently, Mystery, Inc. work for a larger organisation when S.C.O.O.B. rolls around. This could allow other mystery-solving characters to be part of this group, similar to S.H.I.E.LD., and could recruit other characters like Secret Squirrel of all people. Other mystery-solving groups include the Funky Phantom (an American Revolution ghost), the aforementioned Captain Caveman, and the talking shark Jabberjaw who is a member of an underwater rock band.

Another question is who would be suitable antagonists. Dick Dastardly and Muttley are the most likely choices, but could they be taken seriously considering their history as classic villainous buffoons. As both racers, saboteurs, flying aces, Dastardly and Muttley have a lot to offer. Perhaps their role in Dastardly and Muttley in Their Flying Machines could serve as an origin point, chasing down a pigeon or a person with vital information to a larger, evil plot. I could easily imagine Dastardly being redesigned as an Immortan Joe character to fit in with the apocalyptic world. I’d even turn to one of the more recent Scooby-Doo cartoons for inspiration, which introduced a fascinating mythos and conspiracy that led to Lovecraftian levels of horror.

On the other side of Hanna-Barbera are the larger, sci-fi adventures, made up of a whole collection of superheroes and extraterrestrial characters. Jonny Quest is the most notable, focused on the titular young adventurer who travels the world with his father Dr. Benton Quest, Jonny’s adopted brother Hadji from India, their friend Roger Bannon, and the dog Bandit. The series had an original run in the 1960s, with two more in the 1980s and 1990s. The third show was more adult in tone to attract a teenage audience. The series involved solving mysteries, often based on real ones, traditional urban legends, and exploring the virtual QuestWorld.

The comic Future Quest involves Jonny and co. encountering a rise in alien activity on Earth, gaining the interest of Jonny’s nemesis Dr. Zin and the evil organisation F.E.A.R. Amongst the featured series in this crossover includes Space Ghost, another popular show, based around a space-faring superhero who had cosmic powers and ability to turn invisible. Space Ghost has quite the legacy, playing a role in both the creation of the channels Toonami and Adult Swim.  Other characters present in Future Quest include the Herculoids, a trio of humanoid aliens and their team of weird but awesome animals; the flying superhero Birdman; and a big friendly robot called Frankenstein, Jr.

So, if we combined these ideas together, a larger story could be created. Let’s say a cosmic entity, say the Lovecraftian-esque Nibiru Entity from Scooby-Doo: Mystery Incorporated manipulates the syndicates of Dr. Zin and Dick Dastardly to kick off an alien invasion, bringing together the characters seen in Future Quest, Mystery, Inc., and other relevant characters for an epic battle. The Nibiru Entity had a close connection to “meddling kids”, and Hanna-Barbera has plenty of those running around, easily incorporating them into the mythos.

Of course, all of this depends on what direction that Hanna-Barbera want to take their planned cinematic universe. It could end up being a disaster like past film versions of their classic properties. I am not saying this universe needs to be dark and gritty. Look how well that has gone for DC so far. It would be wiser to try to capture the charm of the animated series, but try something new as well. You can make a good story out of anything, as long as some effort and imagination is put into it.

Do you think films based on Hanna-Barbera’s beloved franchises could succeed where others have failed? Which characters do you want to see get a new take on the big screen? How does Fred Flintstone not break his legs driving his car? Leave a comment below or on our Twitter feed.