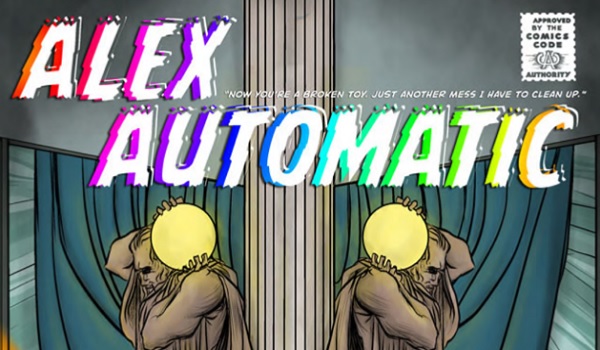 Welcome friends to yet another patented “comic book review™!” You may have noticed that a little comic called Alex Automatic seems to be receiving praise from all corners of the World Wide Web (Internet), and you might even remember that we did a “preview review” (patent pending) of Alex Automatic not too long ago. Needless to say we have been waiting quite patiently to get our grubby mitts on the full version of Alex Automatic, and it certainly did not disappoint! Keep reading downwards for our spoiler-free review!

For those of you who are unfamiliar with Alex Automatic, or who haven’t yet read our review of the preview issue, this book deals with a man named Alex Anderson who’s thoughts and body have been hijacked by the mysterious outfit called PRYSM. Alex is a lot less of a “man” these days, at least in the traditional sense, since he has been augmented with all sorts of cybernetic abilities and tools. Sounds cool right? Well, it is until you factor in that all of Alex’s sweet new robotic parts have caused him to spiral downwards into a deep, black sea of madness and confusion. So much so, that Alex believes he is part of an ongoing television spy-drama.

Admittedly, as I made my way through the preview issue last month, I was expecting a sort of parody of the spy genre from the full length issue. Make no mistake, Alex Automatic does contain some of the DNA of a parody piece, but it’s so much more than that. Fair warning, this book is challenging; the narrative is deceptively deep and often disorienting, but the rewards from having finished it three or four times are well worth the effort. This book is damn good, and you won’t be able to put it down. 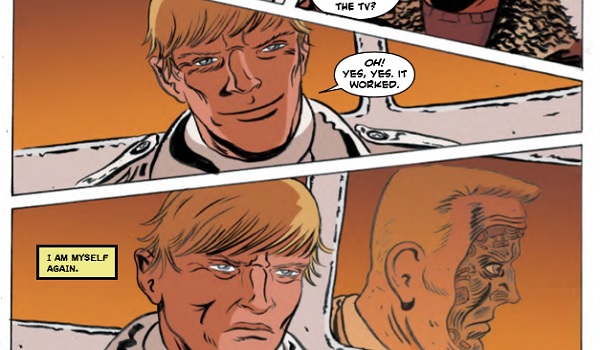 Reflections of the past?

Alex Anderson’s mental state is the main hurdle for the reader in Alex Automatic. Flashbacks give us some insight into Alex’s history with PRYSM and some of the heinous acts he was forced to commit, but at certain points Alex’s reliability comes into question. Has he made it all up? Writer and creator Fraser Campbell makes it nearly impossible for the reader to avoid joining Alex in his insanity, which is both interesting and maddening. The script in Alex Automatic is one of the most unique I’ve seen, and it truly is an experience as you negotiate its pages; it’s the kind of comic that you don’t just simply read, but rather a comic that happens to you.

The narrative shifts back and forth between the past and present at light speed. If you aren’t paying attention to the different versions of Alex, the “dashing hero” and the worn out tool of destruction, you may find yourself wondering what the heck is going on. But that’s the genius of this book, and it will not hold your hand; keep up with Alex Automatic or fall behind, the choice is yours.

Throughout the book we are introduced to a varied cast of characters, complete with dossiers that provide code names, affiliations, miscellaneous info and the like. From “The Vucari,” an agent of the Russian Intelligence community who wishes to “study” (READ: dissect) Alex so that he can augment himself, to the mysterious Wilkie McCall who’s dossier is top secret, there’s no shortage of interesting and intriguing personalities to encounter. 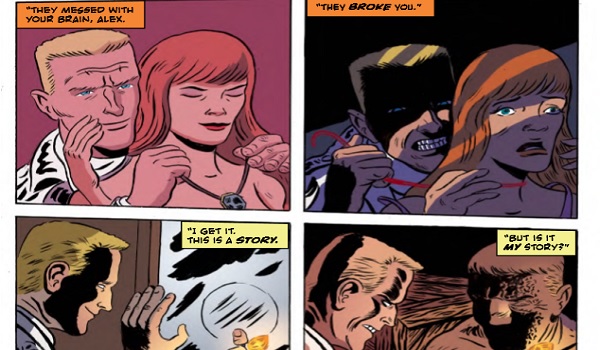 Are these real memories?

The artwork in Alex Automatic is a collaborative effort between James Corcoran (pencils and inks) and David B. Cooper (colors). The book really looks like it came straight out of the Golden Age of Comics, albeit having survived the ravages of time and being presented in its stunning, flawless majesty. Yes friends, the artwork in Alex Automatic is professional grade, and it’s electrifying. But that’s not all; there are variant covers by Iain Laurie, Nick Pitarra and Alasdair Wood that are absolutely incredible. The team of artists involved in this book are all top notch and really take the whole experience to the next level.

Alex Automatic walks the line between total genius and utter insanity, two attributes that are often confused, and for good reason. It begs to be read over and over again, and with each new journey you’ll be seeing more of the big picture; very little of which is presented at face value. Between Alex’s questionable memories and the mysterious “Zero” who seems to elude Alex, there are many forces at work to be discovered. Even though Alex Automatic is a one-shot book, I’m still holding out hope for lots more Alex Automatic in the future. I think you’ll share my sentiments.

I can easily recommend Alex Automatic to just about any reader, unless of course deep stuff isn’t your thing (but it is, right?). Fans of the spy-genre will not be disappointed, and the mind games that are strewn about are just what the criminally insane, brutally sadistic doctor ordered for those out there who like to perform mental acrobatics while reading comics. Get Alex Automatic; get it yesterday.

What do you think of Alex Automatic? Is it the cerebral, spy-drama we’ve all been waiting for? Let us know in the comments section and on our Twitter page!